An Oxford academic is one of a handful of distinguished scholars to have been elected a Member of the American Philosophical Society (APS) for 2022. 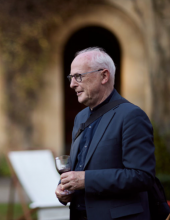 Professor King said: ‘I am extremely delighted and honoured to be elected to the APS and pleased to join such a distinguished scholarly community whose members have contributed immensely to research and knowledge.'

Before taking up the Mellon Chair at Nuffield College, Professor King was a Tutor and Fellow at St John’s College, of which he is now an Emeritus Fellow, and previously a Lecturer at the London School of Economics and Political Science.  He has been a Fellow of the British Academy since 2003 and was elected to the American Academy of Arts and Sciences in 2017.

The American Philosophical Society honours and engages distinguished scientists, humanists, social scientists, and leaders in civic and cultural affairs through elected membership and opportunities for interdisciplinary and intellectual fellowship. It is the oldest learned society in the United States, having been founded in 1743 by Benjamin Franklin for the purpose of ‘promoting useful knowledge.’