Oxford University and the Chinese Academy of Medical Sciences (CAMS) signed a cooperation agreement at a virtual unveiling ceremony of the CAMS Oxford Institute.

The Vice-Chancellor of the University of Oxford formally unveiled the CAMS Oxford Institute (COI), a joint institute base in Oxford and supported by Oxford University and Chinese Academy of Medical Sciences/Peking Union Medical school.

The Institute will deliver outstanding science and help to develop innovative medicines to tackle infectious diseases and cancer.

In September 2016 Professor Richardson visited China and met with Bin Li, Minister of Chinese National Health and Family Planning Commission, to discuss the establishment of the COI. The MOU was subsequently signed during the visit of Madam Yandong Liu (Vice Premier of China) to the UK in December 2017. The final official research agreement was signed in April 2019 by President Chen Wang of CAMS/PUMC, and Professor Gavin Screaton Head of Medical Sciences Division in Oxford. The COI was up running at the beginning of 2019, and it was China’s first overseas medical sciences institute in the UK.

Professor Louise Richardson, Vice-Chancellor of the University of Oxford, said: ‘Since the foundation of the COI it has grown quickly to play an ever more important role in health research. Today’s cooperation agreement will lay the ground for continued growth of this important research institute. It is fitting that in this, the 50th anniversary year of the establishment of ambassadorial diplomatic relations between China and UK, we continue to recognize the importance of our international research collaborations in medical sciences.’

Professor Chen Wang, President of CAMS/PUMC, said: ‘COI is a vivid showcase of successful cooperation paradigm of the two countries. It lays a solid foundation as an iconic base for global collaboration. Looking ahead, CAMS/PUMC and University of Oxford will further engage in joint efforts to promote well-being for humanity by achieving ‘One Health’ and contribute to the building of a global community of health for all.’ 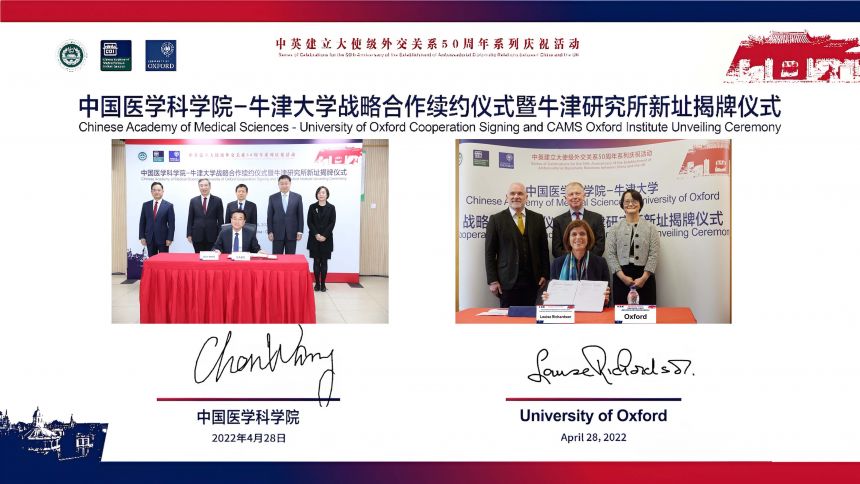