The new Head will take up their position immediately, at an exciting time for the Division.

Professor Daniel Grimley has been appointed Head of the Humanities Division at the University of Oxford, and has spoken of his pride in taking on the role as well as his priorities leading the Division.

Professor Grimley, who is Douglas Algar Fellow and Tutor in Music at Merton College, Oxford and a Professor of Music in the Faculty of Music, will take up his new role immediately, having already served as Interim Head since October 2021.

Most recently he served as Deputy Head of the Humanities Division and as Associate Head of Division for Research from 2016 to 2021, overseeing the Division’s submission to the 2021 REF.

During this time, the Division’s excellence in research and teaching contributed to the University coming top of several international rankings for arts and humanities, including the US News and World Report rankings and the QS World University Rankings by Subject.

Professor Grimley said: “It is a great privilege to take on the role of Oxford’s Head of Humanities. The Humanities Division has an outstanding record for research and teaching and I cannot wait to work with such a talented and passionate body of researchers, professional staff and students.

I cannot wait to work with such a talented and passionate body of researchers, professional staff and students

"I am particularly proud to lead the Division at this critical time when society needs the humanities more than ever, as we seek to rebuild from the devastating effects of the pandemic.

“Among my priorities will be to continue - and accelerate - our work on equality, diversity and inclusion, as well as developing and modernising our curricula.

"As a state school pupil from Kent who benefited so much from the County Music Service, I am particularly committed to supporting academically talented students from all backgrounds who merit a place at Oxford.”

Professor Grimley's research is concerned with music, landscape, and cultural geography, with particular reference to Scandinavian music and early 20th-century English music. Drawing widely on analytical, historical and critical theoretical models, his writing examines landscape both as a medium of representation or description and as a mode of embodiment or performance.

His published monographs include Grieg: Music, Landscape and Norwegian Identity (Boydell, 2006), Carl Nielsen and the Idea of Modernism (Boydell, 2011) and Delius and the Sound of Place (Cambridge University Press, 2018). His latest book, Jean Sibelius: Life, Music, Silence (Reaktion Books, 2021), was recently named a Presto Classical Prizewinner and a Times Literary Supplement Book of the Year for 2021.

Professor Grimley is a member of the AHRC Peer Review College and sits on the board of Oxford University Innovation. 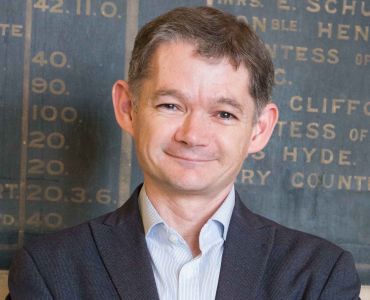 Professor Daniel Grimley will take up his new role immediately
He appears regularly in the media on programmes including BBC Radio 3’s Music Matters.In 2019, he was appointed a Visiting Professor at the University of Copenhagen. He serves on the editorial board of the Journal of the American Musicological Society and has previously been one of the editors of Music & Letters and an associate editor of The Musical Quarterly.

Exciting time for the Division

The Head of Division is responsible to the Vice-Chancellor for the management and academic leadership of the Humanities Division, chairing the Divisional Board, and taking forward its policies and strategies for research, teaching and equality and diversity.

Professor Grimley’s appointment comes at an exciting time for the Humanities Division. Late last year the Digital Scholarship @Oxford (DiSc) project was launched. This is a five-year, £2.4 million inter-disciplinary project aimed at transforming the application of digital technology to Humanities research. A new Master’s programme in digital scholarship has been established alongside DiSc.

The Division is currently awaiting the decision of Oxford City Council about its planning application for the Stephen A. Schwarzman Centre for the Humanities, which will provide a new home for Oxford Humanities, a library, arts venues including a 500-seat concert hall, and the Humanities Cultural Programme which will bring Oxford’s research and artistic performances to new audiences.