Samson Kambalu, Professor of Fine Art at Ruskin School of Art, has won a commission for a place on the ‘fourth plinth’ in Trafalgar Square with his powerful sculpture, Antelope, depicting the pan-Africanist Malawian preacher, John Chilembwe. 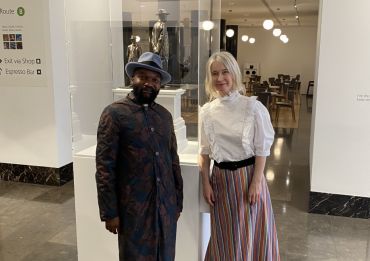 Professor Samson Kambalu with Justine Simons, the Deputy Mayor of Culture in front of the Antelope maquette at the National Gallery

In a ceremony in London, where the winners were announced, Malawian-born Professor Kambalu said, ’Antelope on the Fourth Plinth was ever going to be a litmus test for how much I belong to British society as an African and a cosmopolitan. This commission fills me with excitement and joy.’

The sculpture is a recreation of a 1914 photograph depicting the Malawian Baptist preacher outside his new church with John Chorley, a European missionary.

Professor Kambalu, a fellow of Magdalen college, won the commission following a public vote organised by the Mayor of London’s office. More than 17,000 people voted for their favourite among six original artworks. 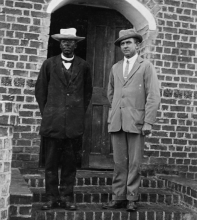 In the sculpture, Professor Kambalu depicts Rev. Chilembwe as larger than life and wearing a hat, which was strictly forbidden in front of white people.

The year after the photograph was taken, the preacher led a rebellion against colonial rule and died.  He is still very much remembered in Malawi with a national day and was formerly depicted on bank notes. It was to be nearly 50 years before Nyasaland became independent as Malawi in 1964.

A maquette of Antelope is part of an exhibition by Professor Kambalu at Modern Art, Oxford, New Liberia, which runs until 5 September and can be viewed at this link: https://www.modernartoxford.org.uk