New research from the University of Oxford’s Department of Zoology has used innovative technology to study causes of declines in puffin populations in the northeast Atlantic, and found that a lack of prey near some major breeding colonies is driving puffin chicks to starve, ultimately leading to population declines.

Puffin populations, especially in the northeast Atlantic, have been in decline for decades. For example, the Norwegian colony of the Røst archipelago included in this study, formerly home to over 1 million pairs of puffins, has declined by over 80% since the 1970s. However, some smaller populations, such as Skomer Island in Wales, seem to be thriving. This research aimed to identify the mechanisms driving poor breeding success in declining populations, in particular relating to food availability. 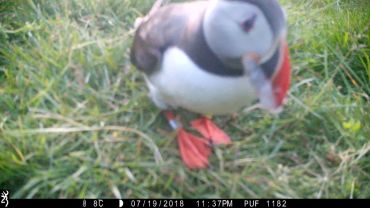 To understand this, an international team of researchers studied and compared the feeding behaviour of four different puffin populations with contrasting success in Iceland, Norway and Wales. The team used tiny GPS trackers weighing only 3g to track for the first time the feeding movements of puffins in these countries. These trackers automatically uploaded data onto a base station when the puffins returned to their nest, so minimal intervention was needed. By combining the GPS tracking with automated camera traps near the puffins’ nests and DNA analysis of puffin droppings, the researchers were able to explore where the puffins were feeding, how often they fed their chicks, and what prey they were eating.

They found that at the colonies with poor breeding success, the puffins needed to fly much further afield to find food (sometimes leading to >100km round trips) than at healthier colonies. These longer travels required the parents to spend more time in flight, which is very energetically costly for them, and caused chicks to be fed less often. The diet and camera trap analyses also showed these birds brought back smaller fish loads to their chick and fed on lower quality prey, which caused many chicks to grow less well or even starve.

Together these results indicate that a lack of prey near some puffin colonies in the northeast Atlantic has a major impact on the breeding success of these colonies, ultimately leading to population declines. Climate change is at least partly responsible for this lack of prey, with changes in currents and sea temperatures affecting the abundance and availability of fish that the puffins rely on to rear their chick.

Dr Annette Fayet, a research fellow at the University of Oxford and lead author on the study, said: ‘Our study highlights the huge impact that climate-driven changes in prey availability can have on seabird populations – here forcing birds to feed much further away than they normally would, and preventing them from feeding their offspring sufficiently, which ultimately causes chick starvation. Many other seabird species in the region feed on similar prey, so the effects we detected in puffins are also likely to occur in other species.’

Our study shows that high chick mortality by starvation is driven by puffins having to fly further to find food.

Dr Erpur S. Hansen, an Icelandic collaborator on the study, said: ‘Atlantic puffins, like all birds in the auk family, have a very energetically costly flight, which makes them sensitive to changes in their feeding distance, but also makes them an excellent gauge of change in their food supply.

Our study shows that high chick mortality by starvation is driven by puffins having to fly further to find food. This has been happening in both the very large puffin colonies in Lofoten (Norway) and Westmans (Iceland) for the last decades.’

By tracking the feeding movements of puffins around these colonies for the first time, the study also revealed feeding areas of importance for their breeding success. This knowledge can help inform conservation policy, by highlighting which areas should be protected. Additionally, the diet analysis of puffin droppings using recent DNA metabarcoding techniques, led by Dr Gemma Clucas at Cornell University, provided novel insight into what adult puffins eat.

Dr Tycho Anker-Nilssen, who has studied puffins in the Norwegian colony for 40 years, is enthusiastic about the novel techniques in seabird research. He said: ‘Steadily smaller and more accurate tracking devices and advances in genetics are now revolutionising our ability to uncover the ecological mechanisms in play when seabirds are severely affected by climate change and human impacts. Such knowledge is essential both for ecosystem-based management of marine ecosystems in general and the urgent quest for actions that can improve the situation for many of our impoverished seabird populations.’

Moving forward, this team is planning to do further studies on puffin populations to expand its data over the longer term, and other researchers are now using these techniques to study puffin populations elsewhere. Dr Fayet also intends to continue studying puffins on the thriving Welsh colony on Skomer Island, to detect any potential changes occurring to this currently healthy and growing population.

This research was partly funded by the National Geographic Society and Sky Ocean Rescue.