The annual awards celebrate the UK’s top ten black African and Caribbean university students, who will inspire the next generation with their exceptional achievements.

For over ten years Rare, a specialist diversity recruitment company with expertise in graduates, has searched the country for students who have excelled academically as well as in business, charity, community, music, sport and technology.

Now in its twelfth year, the ceremony was recently held online due to social distancing restrictions, and it was announced that four Oxford postgraduates made the top ten.

Here are their inspirational stories… 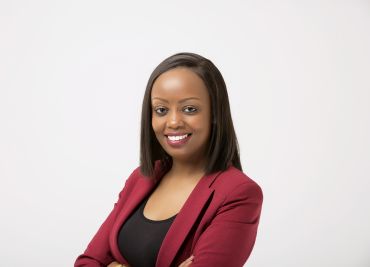 What this award means to me: Being nominated as one of Rare Rising Stars UK was an honour and I felt humbled to be among other top black students in the UK, and I was blown away to rank number one.

How I hope my achievements could inspire: I have had to make some tough choices and sacrifices along the way. The first validation for choosing a purpose-driven career came when I received the Skoll Social Entrepreneur Scholarship to study at Oxford University's Saïd Business School. Based on my own struggles, I want to offer women the same support I received. In being recognised by Rare Rising Stars UK, I look at it as validation that I am on the right path.

Dr Diana Wangari Gitau's story: Diana was born in Nairobi, Kenya, and at a young age had to help pay her school fees. Eventually, despite still being a teenager, she was able to find a job at the local newspaper as an opinion writer documenting her life as a student. When Diana got a place at medical school, her column became a medical student diary published in The Standard Kenya, the second largest paper in the country at that time.

Whilst studying Medicine, Diana was confronted by the challenges facing Kenyan’s healthcare system. As a journalist, she decided to start writing more on public health. After learning of the Institute of Tropical Medicine in Antwerp, Belgium, and with the help of her editors and supervisors, a journalist-in-residency programme was created which allowed her to examine communicating public health challenges. This period coincided with the Ebola outbreak of 2014 and Diana had the opportunity to work on the ground in Liberia and Sierra Lone. Alongside a team from the Institute of Tropical Medicine, Diana developed a media communication tool for the Ebola outbreak that went on to be used by the World Federation of Science Journalists. This tool was also used to train a majority of science journalists in West Africa.

After finishing her medical degree and returning to Kenya, Diana met an African American doctor and former toxicologist. Together, they co-founded iSikCure, an app that allowed patients to remotely order medication rather than having to queue up in hospital for it. They went on to set-up local specialised medical clinics to allow patients to initiate their first point of contact in-person. In 2018, iSikCure became CheckUps Medical Centre and launched with eight small clinics in Kenya. However, demand was so high that the small clinics were consolidated into three major clinics in Nairobi and they opened eight smaller pick-up points around the country. The social enterprise received grants amounting to $1 million and subsequently raised $5 million from various investors which allowed for CheckUps Medical Centre’s expansion to East Africa. Diana served as CEO of the company and was nominated for the Top 40 Under 40 businesswomen in Kenya, Top 100 Most Influential Youth in Kenya, Management Today 35 Women Under 35 in the UK, and Forbes 30 Under 30 in Africa.

What the future holds: In the time since joining Oxford University’s Saïd Business School, I have since exited from Checkups Medical Centre and become part of the founding team for Lens Africa Fund where we are raising a gender lens investment vehicle [the practice of investing for financial return whilst considering the benefits to women] to support women-led companies, products and services and advocate for more women in CEO positions. I recognised the gaping capital need for more female-led companies and the need to get more women in executive positions. A report by McKinsey Global Institute, 'The Power of Parity' says that Africa would take an average of 142 years to reach gender parity at the current pace, and as a young African female CEO, I want to change that. In fact, I have come to use this slogan to define my purpose ‘The Mission is simple: More Female CEOs’. 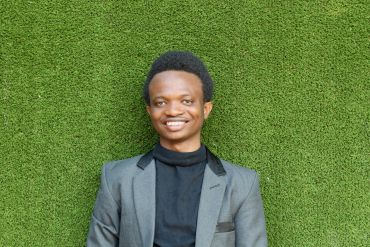 What this award means to me: I hope this will shed more light on educational inequalities and the quality of education globally but more specifically in Nigeria. This is an area I am passionate about asides my career and I hope this award serves as a microphone to help project the voices of the children I am advocating for through my organisation, The Ganglion Initiative, and to reach those willing to assist in addressing this societal problem. Personally, it means that I made the right decision in choosing to take a break from my clinical career and work in an interesting area of women's health and addressing critical health problems of preeclampsia and preterm birth.

How I hope my achievements could inspire: If there is one thing to take from this, it is that the best time to start your idea was five years ago and the next best time to start is right now. My grandma used to say: 'Do not leave till tomorrow what you can do today'. This is one of my guiding principles both academic and extracurricular. You are never too young to start and if anyone tells you otherwise, they are wrong. Also, family and friends mean a lot. They will be the ones to get you through tough times.

Dr Awoyemi's story: Dr Toluwalase Awoyemi grew up in a rural town in Oshun State near Lagos, Nigeria. Subsistence farming was a part in his life growing up, and agricultural science and biology became Toluwalase’s favourite subjects in school. Toluwalase completed his secondary school final exam with one of the top three grades in his school. As a result, he gained admission into the University of Ibadan medical school, the best medical school in West Africa, and excelled. In total, Toluwalase finished with 20 academic awards: only three other people in the university’s history accumulated so many.

Family and friends mean a lot. They will be the ones to get you through tough times.

During his studies, Toluwalase volunteered for CHECK Medical Missions and coordinated the academic arm of the charity. He also went on to become Academic Director, Planning Director for their outreach arm, and Logistics Director. Toluwalase began officially teaching as part of the medical school’s department in his fourth year.

More recently, Toluwalase co-founded his own Non-Governmental Organisation called The Ganglion Initiative, an education social enterprise which aims to correct the shortage of careers counsellors and university admission services among public secondary schools in Nigeria compared to their private counterparts. In 2017, Toluwalase was awarded a Rhodes Scholarship to begin his PhD in Women and Reproductive Health at Oxford. His research aims to understand why some babies are born prematurely and why a significant number of women develop hypertension while pregnant. Dr Awoyemi is also involved in the access and outreach programme at his college, Christ Church, and works to increase the representation of ethnic minority students at Oxford.

What the future holds: My organisation has exiting plans in the next few months. Firstly, we are launching our scholarship scheme for public secondary school students in Nigeria, secondly we are starting our mask-up drive which hopes to give masks, sanitisers and stationeries to at least 1,000 secondary school students to help reduce the spread of coronavirus once schools reopen, and finally we will be launching our career playbook. Personally, I pray I am granted ‘leave to supplicate’ in my DPhil next year so I can start my medical residency training soon after. 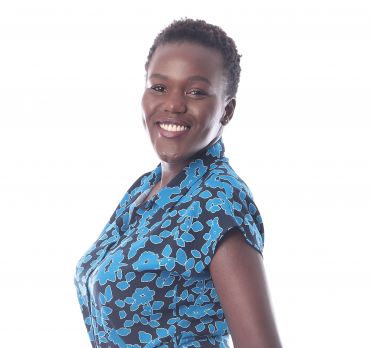 Ruth Nyakerario’s story: Ruth grew up in the outskirts of Nairobi, Kenya, in a town called Embakasi. Ruth recalls relocating several times, and estimates she attended more than five primary schools. Aged 8, she would travel for over three hours each way to get to her school. However, as her mother was a primary school teacher, the value of education was never lost upon Ruth, and she performed well in her primary school exams. This enabled her to attend a state-funded boarding school. Ruth went on to become one of only two students to receive a scholarship to attend one of the oldest private universities in Kenya, the United States International University.

Ruth studied International Relations, which opened her eyes to the issues caused by socio-economic divide that affect people across the African continent. Ruth and her friend, Viney Gisore, co-founded Out of the Streets with a commitment to ensure homeless children in Kenya get an education, food, empowerment, clothing, and, if possible, a chance to be re-united with their families. The programme started in Feburary 2015 with Viney and Ruth cooking self-funded hot meals and sharing lunch and a few hours with the children every week.

The foundation also established a centre in a very deprived area called Majengo, and would run weekend education sessions for 50 to 60 children

By 2016, the foundation had expanded with more volunteers and started running medical camps, serving more than 1,000 people, mostly children, but also members of the wider community in slum areas in Nairobi. The foundation also established a centre in a very deprived area called Majengo, and would run weekend education sessions for 50 to 60 children, most of whom were not in school during the week. They also had arts and spiritual sessions, enabling kids to open up and share their aspirations; this became a turning point for some. Many of the children were also addicted to sniffing glue. Alongside their other initiatives, the foundation would identify the children they thought were recovering and help fund their rehab.

Ruth applied for and was successful in receiving a Rhodes Scholarship, which funded her education at Oxford. In her first year, Ruth read Refugee and Forced Migration Studies and in her second year undertook a further Master’s in African Studies. Ruth still intends to go back to community work and her Out of The Streets team is working towards establishing their own rehab centre. 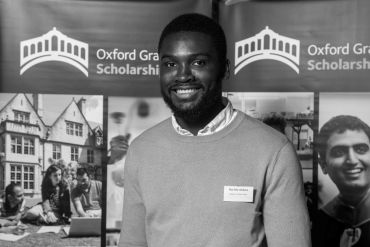 Roy Sefa-Attakora’s story: Roy was born in Lambeth and raised in Lewisham where, growing up, he experienced witnessing friends losing their lives or going in and out of prison, and was motivated to make a change in society.

Alongside his A-Levels, Roy started working for Safer London in 2013 as an ambassador to help bridge the gap between the Metropolitan Police and his local community. As a result, Roy was invited to work more strategically with Safer London, holding regular meetings with Prince Charles. Following this, Roy was asked to co-chair the Youth Justice Convention in 2015 where he worked with MPs within the Ministry of Justice, judges and charities discussing how to improve criminal justice policy.

Roy then joined the Youth Justice Board for England and Wales, and led a panel to provide ideas and solutions on youth crime prevention that helped to shape both the Board itself and government policy. Roy also worked with prisons for young people, government officials and key stakeholders to introduce more mainstream education into prison. Roy has also been a part of steering group meetings with both the former Prime Minister Theresa May and the current Prime Minster Boris Johnson, advising on efficient and effective ways to reduce serious violence and re-offending rates in the UK.

These experiences led Roy to start his own mentoring programme - the Roy Sefa-Attakora Academy - mentoring young people between the ages of 14-16. Alongside all this, Roy Sefa-Attakora was able to graduate with a First Class Honours degree from the University of Loughborough. Last year, he was awarded the 2019 Duke of Cambridge Scholarship and is now undertaking his Master’s in Public Policy at the University of Oxford.