Researchers at Oxford University, in collaboration with DeepMind, University of Basel and Lancaster University, have created a machine learning algorithm that interfaces with a quantum device and ‘tunes’ it faster than human experts, without any human input. They are dubbing it ‘Minecraft explorer for quantum devices’.

Classical computers are composed of billions of transistors, which together can perform complex calculations. Small imperfections in these transistors arise during manufacturing, but do not usually affect the operation of the computer. However, in a quantum computer similar imperfections can strongly affect its behaviour.

In prototype semiconductor quantum computers, the standard way to correct these imperfections is by adjusting input voltages to cancel them out. This process is known as tuning. However, identifying the right combination of voltage adjustments needs a lot of time even for a single quantum device. This makes it virtually impossible for the billions of devices required to build a useful general-purpose quantum computer.

Today in Nature Communications the scientists describe a machine learning algorithm that solves this problem. By tuning away the differences between quantum devices, they hope to make large quantum circuits feasible and unleash the potential of quantum technologies in fields ranging from medicine to cryptography.

We have demonstrated that the tuning of our quantum devices can be done fully automatically using machine learning. This demonstration shows a promising route towards the scalability of quantum processors.

Lead author Dr Natalia Ares, from Oxford University’s Department of Materials, says: ‘The difficulty in tuning has so far been a major hindrance for building large quantum circuits, since this task quickly becomes intractable. We have demonstrated that the tuning of our quantum devices can be done fully automatically using machine learning. This demonstration shows a promising route towards the scalability of quantum processors.’ 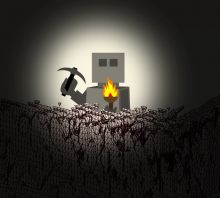 The scientists’ machine learning algorithm takes a similar approach to a player of Minecraft. In this game, often the player is in a dark cave and has to find ore. They can use torches to illuminate parts of the cave, and once some ore is found, the expectation is that more might be found nearby. However, it is sometimes worth exploring other parts of the cave where more ore could be found. This is a trade-off between exploration and exploitation. In this case, the machine has to find the right operating conditions for the quantum device (ore) and with that aim it explores a dark cave (the space of parameters defined by the voltages). Once good operating conditions have been found, the exploitation-exploration trade-off comes to play. The torches are measurements of the quantum device, which are expensive and therefore scarce, so are a resource to be used wisely.

Our ultimate goal is to fully automate the control of large quantum circuits, opening the path to completely new technologies which harness the particularities of quantum physics.

Dr Ares says: ‘We were surprised that the machine was better than humans in the laboratory, we have been learning how to efficiently tune quantum devices for years. For humans, it requires training, knowledge about the physics of the device and a bit of intuition!

‘Our ultimate goal is to fully automate the control of large quantum circuits, opening the path to completely new technologies which harness the particularities of quantum physics.’

Co-author, Dr Edward Laird of Lancaster University, says: ‘When I was a PhD student in the 2000s (in the same lab with Dominik Zumbühl, who is one of the collaborators on this project from University of Basel), I would often spend weeks tuning one prototype qubit by hand. We all knew that we would need to automate the task one day, but I had no idea how that could work. Thanks to machine learning, we can now see a way to do it. I hope soon we will be able to use our approach to completely tune a small-scale quantum computer.’