A Cutaway of InSight on Mars: In this artist's concept of NASA's InSight lander on Mars, layers of the planet's subsurface can be seen below and dust devils can be seen in the background.

The NASA InSight lander, which is supported by the UK Space Agency, has recorded 400 likely ‘Marsquakes’ in the first year of its mission. 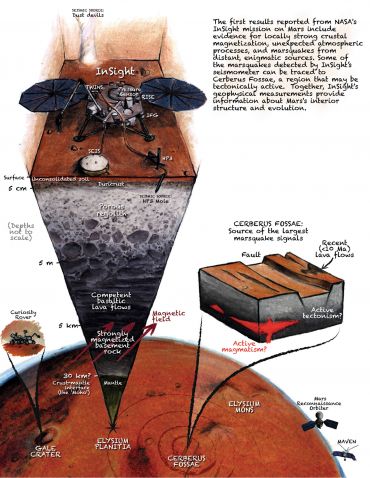 The seismic vibrations on Mars were detected by a set of silicon sensors developed in the UK for InSight’s Seismic Experiment for Interior Structure (SEIS).

Imperial College London, Oxford University, University of Bristol and STFC RAL Space worked in partnership, with £4 million in funding from the UK Space Agency, to develop three sensors which are sensitive enough to detect motion at sub-atomic scales.

Dr Neil Bowles, from the University of Oxford’s Department of Physics, said: The measurement of the first events from the surface of Mars by InSight are showing that the planet is still seismically active.'

As InSight continues to monitor the planet over the next year, we are working with our colleagues on the mission team to help understand the interior and atmosphere of the planet in a completely new way.

Science Minister Amanda Solloway said: ‘Detecting hundreds of Marsquakes on a planet 140 million miles from Earth, using sensors developed in the UK, is an important achievement.

‘This is an example of how world-leading UK science and our growing space sector contribute to international missions, furthering human understanding of the Solar System.’

The NASA Insight mission is the first to look deep beneath the Martian surface and detected the first ever recorded Marsquake on 6 April 2019. By the end of last year it was detecting an average of two quakes every day. The findings suggest that Mars experiences quakes more often, but also more mildly than expected with the largest measuring 4.0 on the Richter scale.

Seismic waves change as they move through different materials and this allows scientists to understand the inner structure of Mars. From this, they can also learn how other planets, moons and meteorites with rocky surfaces, including Earth, formed billions of years ago.

Professor Tom Pike, from Imperial College London, who leads the UK team, said: ‘From the tremors, we can build a picture of Mars’ interior, building up a cross section of the planet all the way down to the core. The remains of a liquid core could suggest that Mars once had a magnetic field. Like on Earth, the field would have protected it from harmful solar winds billions of years ago. Back then, Mars then was much warmer and wetter, and much more hospitable for life.

‘Studying Mars lets us travel to the solar system’s ancient past. While Earth and Venus’ tectonic systems have destroyed most of the evidence of their early history, much of the Red Planet has remained static for more than three billion years.’

InSight carries other instruments to measure the Martian wind, magnetic field and temperature. Scientists set out the findings from the mission in a series of six papers published today in Nature Geoscience and Nature Communications.

Listen here to the sounds of Mars.