Several exhibitions are currently running across Oxford University colleges celebrating the achievements and contributions of female and BAME students since they became co-educational institutions. They include Dr Anne Marie Imafidon MBE, and Honourary Fellow Keble College, and a graduate of MMathCompSci Maths and Computer Science. Image credit: Fran Monks
Published

Several exhibitions are currently running across Oxford University colleges celebrating the achievements and contributions of female and BAME students since they became co-educational institutions.

As part of the collections some of Oxford’s colleges have selected stand out alumni, staff and Fellows to honour with portraits on their dining hall walls.

The artwork expands on the previous Diversifying Portraiture initiative, launched in 2017 to broaden the range of people represented around the University.

Naomi Kellman, a graduate of Lincoln College, who studied Philosophy, Politics and Economics ( class of 2008), who now co-chairs the Black Alumni Network and is Senior Manager for Schools and Universities at Rare Recruitment, was featured in an exhibition celebrating 40 years of women at Lincoln College. She was also invited to write a short piece reflecting on her time at Lincoln and what the exhibition means to her. She said: ‘I feel very proud to be featured alongside such wonderful women and in the hall that I spent so many evenings in. For me, it’s a symbol of belonging. And I hope that many more black women share in that feeling of belonging at Oxford in the years to come.’

Professor Dapo Akande, Professor of Public International Law at the Blavatnik School of Government, Fellow at Exeter College and Co-Director of the Oxford Institute for Ethics, Law and Armed Conflict (ELAC), has become the first black professor to be honoured with a portrait at St Peter’s College, Oxford. He said: 'I began teaching at St Peter's College in 2004. I found it, and Oxford, to be a very supportive and welcoming academic environment. It is my hope that this will be everyone's experience of Oxford. I also hope that the diversity of portraits now to be seen across Oxford will help to ensure that everyone with potential, particularly prospective students, will be able to visualise themselves being here, and being at home here.' 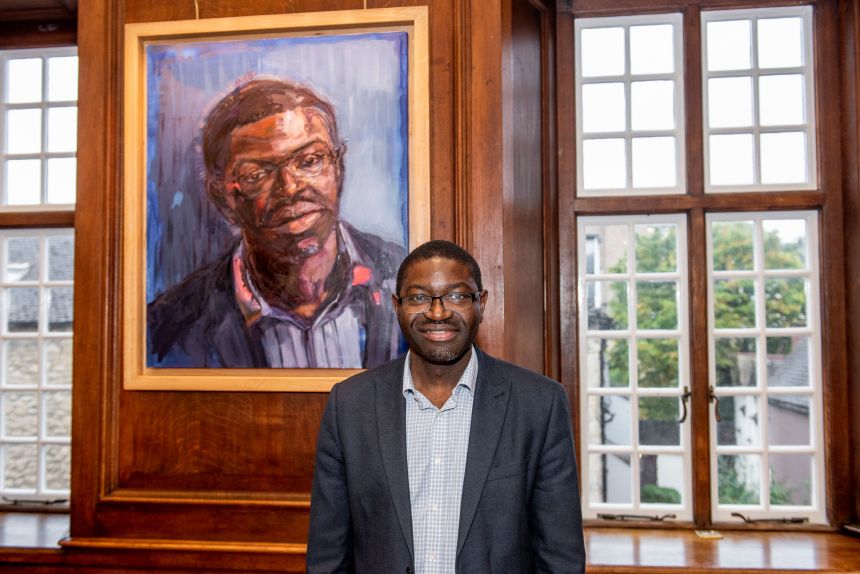 Professor Dapo Akande, Professor of Public International Law at the Blavatnik School of Government, Fellow at Exeter College and Co-Director of the Oxford Institute for Ethics, Law and Armed Conflict (ELAC), has become the first black professor to be honoured with a portrait at St Peter’s College, Oxford. Image credit: Edmund Blok

Alexandra Wilson, a graduate of University College (UNIV), who studied Philosophy, Politics and Economics (class of 2016), and is now a barrister specialising in family law, who’s portrait was unveiled as part of the latest update to the Young UNIV Gallery. Originally unveiled by University College Oxford in 2017, the exhibition features over 50 portraits of UNIV alumni (male and female) aged 35 and under. Alexandra’s portrait was added to tie in with celebrations of 40 years of women at Univ. Of being recognised, she said: ‘I couldn’t be prouder to have my picture hanging on the wall of the oldest college at Oxford University. Today we celebrated 40 years of women at Oxford, next year we’ll have our first female master at UNIV & the first black master at Oxford. We’re making history!’

Renee Kapuku, a graduate of Keble College, who studied History (class of 2018), features in an installation of 28 inspirational people, including alumni, staff, students and Fellows, currently running at the College.

Renee went on to study International Development Policy at the Graduate School of Education, Harvard University, and now works at the non-profit organisation Malaika DRC, which aims to provide education and sustainable resources to young girls in the Democratic Republic of Congo. Tweeting about the honour, she said: ‘Super grateful to Oxford University & Keble College for celebrating me as one of their 28 most inspirational people since the college’s founding in 1870. Maybe one day I’ll have a permanent place.’

Dr Anne Marie Imafidon MBE, also features in the Keble College exhibit. An honorary Fellow of the college and a graduate of MMathCompSci Maths and Computer Science (class of 2006), Dr Imafidon co-founded Stemettes, an award-winning social enterprise aimed at inspiring and promoting the next generation of women and breaking down social stereotypes. She has gone on to become a powerhouse in the STEM sciences. Her championing work earned her an MBE in 2017, a place on the Forbes List of The World’s Top 50 Women in Tech 2018 and an inclusion in the rapper Dave’s recent music video for his empowering hit ‘Black’. Of the accolade, Dr Imafidon said: ‘There's a portrait of me (& 27 others) hanging in Hall at Keble College and it is honestly one of the most surreal things that has ever happened in my life.’

Others honoured include Bonnie St John, a Rhodes Scholar who is a graduate of Trinity College, where she studied for M.Litt in economics (class of 1990), and Roma Tearne, who completed an MA at the Ruskin School of Fine Art in 2002, and went on to be the Leverhulme Artist in Residence at the Ashmolean Museum from 2002-2003.

Dr Rebecca Surender, Pro Vice Chancellor and Advocate for Equality and Diversity, said: ‘It is not enough to just say you are inclusive university, you have to show it, and ensuring that all students and staff feel at home at Oxford, and can relate to those on the walls around them is a key part of this. It is so important to highlight the full range of diversity at Oxford and to remember the contributions of our BAME alumnae. I hope the installations inspire a wider range of students, and helps them to feel that they belong here.’