Fossilised newborns, egg shells, and egg bursters preserved together in amber provide the first direct evidence of how insects hatched in deep time, according to a new article published today in the journal Palaeontology.

One of the earliest and toughest trials that all organisms face is birth. The new findings give scientists evidence on how tiny insects broke the barrier separating them from life and took their first steps into an ancient forest.

Trapped together inside 130 million-year-old Lebanese amber, or fossilised resin, researchers found several green lacewing newborn larvae, the split egg shells from where they hatched, and the minute structures the hatchlings used to crack the egg, known as egg bursters. The discovery is remarkable because no definitive evidence of these specialised structures had been reported from the fossil record of egg-laying animals, until now.

The fossil newborns have been described as the new species Tragichrysa ovoruptora, meaning ‘egg breaking’ and ‘tragic green lacewing’, after the fact that multiple specimens were ensnared and entombed in the resin simultaneously. 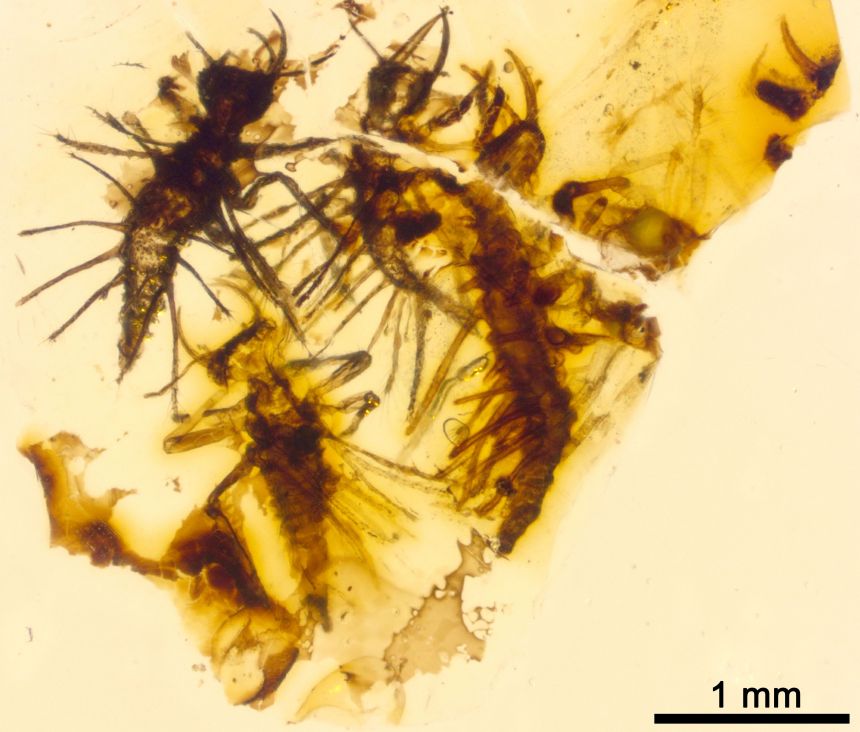 “Egg-laying animals such as many arthropods and vertebrates use egg bursters to break the egg surface during hatching; a famous example is the ‘egg tooth’ on the beak of newborn chicks,” explains Dr Ricardo Pérez-de la Fuente, a researcher at Oxford University Museum of Natural History and lead author of the work. “Egg bursters are diverse in shape and location. Modern green lacewing hatchlings split the egg with a ‘mask’ bearing a jagged blade. Once used, this ‘mask’ is shed and left attached to the empty egg shell, which is exactly what we found in the amber together with the newborns.”

Green lacewing larvae are small hunters which often carry debris as camouflage, and use sickle-shaped jaws to pierce and suck the fluids of their prey. Although the larvae trapped in amber differ significantly from modern-day relatives, in that they possess long tubes instead of clubs or bumps for holding debris, the studied egg shells and egg bursters are remarkably similar to those of today’s green lacewings. Altogether, they provide the full picture of how these fossil insects hatched like their extant counterparts, about 130 million years ago during the Early Cretaceous.

“The process of hatching is ephemeral and the structures that make it possible tend to disappear quickly once egg-laying animals hatch, so obtaining fossil evidence of them is truly exceptional,” remarks Dr Michael S. Engel, a co-author of the study from the University of Kansas. 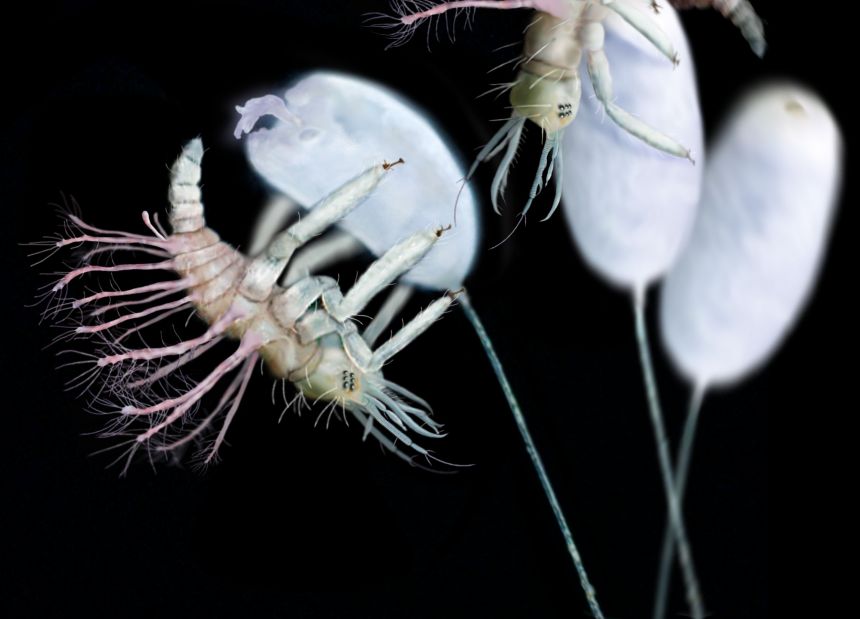 Reconstruction of the insects.

The Tragichrysa ovoruptora larvae were almost certainly trapped by resin while clutching the eggs from which they had freshly emerged. Such behaviour is common among modern relatives while their body hardens and their predatory jaws become functional. The two mouthparts forming the jaws are not interlocked in most of the fossil larvae, which further suggests that they were recently born.

All the preparations studied were obtained from the same amber piece and are as thin as a pinhead, allowing a detailed account of the fossils and finding the tiny egg bursters, according to Dr Dany Azar, another co-author of the work, from the Lebanese University, who discovered and prepared the studied amber samples.

It would seem reasonable to assume that traits controlling a life event as crucial as hatching would have remained quite stable during evolution. However, as Dr Enrique Peñalver of the Spanish Geological Survey (IGME; Geomining Museum) and co-author of the work explains: “There are known instances in modern insects where closely related groups, even down to the species level, show different means of hatching that can entail the loss of egg bursters.

“So, the long-term stability of a hatching mechanism in a given animal lineage cannot be taken for granted.”

Nonetheless, this new discovery in fossil green lacewings shows the existence 130 million years ago of a sophisticated hatching mechanism which endures to this day.