Aboud in Sydney, with his violin on his back
Published

A 14-year-old Syrian refugee who received a violin from Oxford has received a visa to start a new life with his family in Australia.

The loan came about after the Faculty was approached by filmmaker Susie Attwood. Susie had met Aboud while filming The Wait, a film about Syriac Christian families waiting in a monastery in Lebanon in hope of receiving a visa for a new country.

Susie, herself a violin player who studied music at Oxford, was impressed with Aboud's talent on the violin - especially after she learned that his only education had been from YouTube tutorials and his only instrument was a "cheap and rattly" child-sized violin.

Aboud's visa is not only good news for him and his family, but also for his music. He is now in contact with a music college in Sydney and Susie is confident he can now unleash his full potential as a violinist.

"It was amazing when I heard the news," she said. "I got a message from Aboud's mum with this picture of him in Sydney with a violin on his back - a selfie with his family in the background. It's amazing that this violin has travelled from Oxford to Lebanon and now all the way across to the other side of the world to Australia.

"He takes good care of it and I hope that he'll be able to take lessons soon and fulfil his dream."

She added: "Aboud once said to me: 'My one thing in life is I want to play on the stage, I want to be a famous violinist'. So he's taken his violin with him from Oxford and I'm sure he's practising every day still. We WhatsApp, my Arabic is not great and their English is OK. But we use emojis and we send nice smiley faces and it's really good to keep in contact with them."

Oxford's Music Faculty also hopes to maintain its link with Aboud, and to host him for a concert in Oxford in the future.

Professor Michael Burden, chair of the Music Faculty board, said: "The Faculty is delighted that Aboud has found shelter in Australia, and that he is now in contact with a music college. We hope very much that we can keep in touch, and perhaps he can come and play for us here in Oxford one day."

Last month, The Wait was screened to more than 100 people at The Queen's College in Oxford, followed by a Q&A with Susie and Daniel Gabriel, who is the former Human Rights Director for a UN NGO, the World Council of Arameans.

Although the film's stars have difficult stories, Aboud still managed to make the audience laugh when the film showed him dancing around his crying friend while playing his violin to try and cheer her up. It worked.

About and his family are Syriac Christians, which is a group that is particularly threatened by the war in Syria.

Daniel Gabriel of the World Council of Arameans said: "Every refugee has a story but Susie has captured something quite incredible. It is the unique story of the indigenous people of the region - the Syrian Aramean Christians. Their number has dwindled by more than 70% since the beginning of the Syria war. Soon the birth place of Christians will have none left." 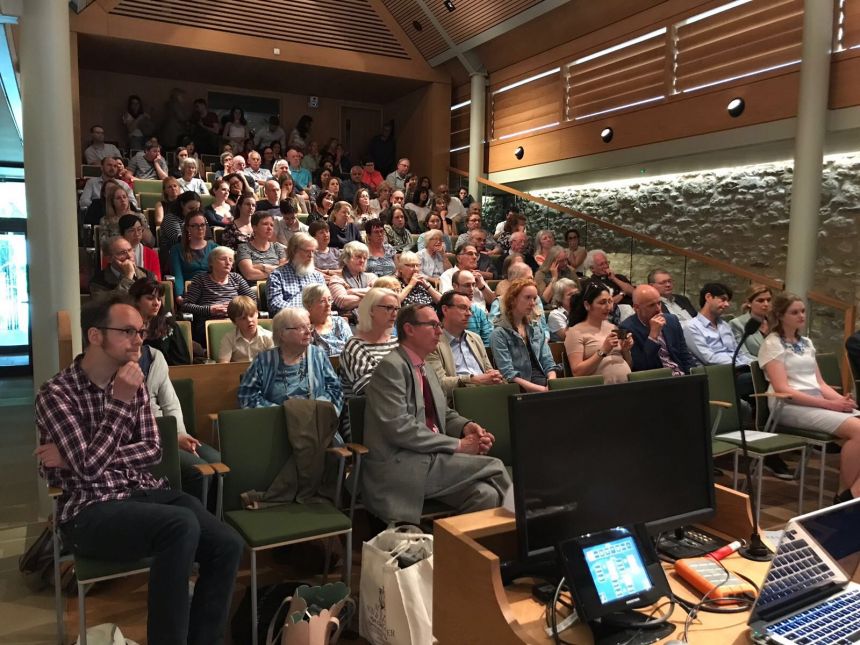