Female fruit flies' levels of aggression soar after sex, when a variety of proteins, which flow freely in semen, stimulate dramatic behavioural and physiological changes in females. Other changes include increased ovulation, rejecting male advances and loss of interest in sex. Increased post coital levels of aggression may have wider in direct implications on female competition.

Studies in many species have shown an association between increased levels of aggression in females, egg laying and reproduction. Protecting and providing for offspring is often identified as the main motivation for this behaviour. The factors at play in the reproductive process, that trigger such dramatic behavioural changes, have until now, been less clearly understood.

A team of researchers led by Dr Eleanor Bath and Dr Stuart Wigby of the Oxford University Department of Zoology, examined hundreds of fruit flies, assessing the impact of mating on female fruit fly behaviour, and to what degree it alters their levels of aggression. Fruit flies are also known as Drosophila melanogaster, a species of fly that is approximately one-eighth of an inch in length, with red eyes. Fruit flies are known for being drawn to ripe or rotten foods like fruits and vegetables.

The research newly published in Nature Ecology & Evolution, proposed that aggression was potentially stimulated by two factors; either indirectly as a result of costly egg-production, or directly by coming into contact with the components contained in the male’s ejaculate. The findings show that after mating, female fruit flies become evidently more aggressive towards each other when fighting over food, often head-butting and swatting at each other. Specifically, pairs of mated females fought significantly more than virgin pairs. Pairs with at least one newly mated female were also found to be more aggressive towards each other than pairs with two virgin females.

Learn more about aggression in female fruit flies in the video below:

A lot is known about male fruit fly behaviour and what affects their levels of aggression, but very little has been published about competition among females. Even taken on its own, our study is useful. If these behavioural changes occur in fruit flies, it is highly likely that they are happening in other insects.

Dr Stuart Wigby, Research Fellow in the Department of Zoology at Oxford University

Females are also know to experience a number of other dramatic changes after mating, including increasing their levels of egg production, increasing their feeding rates, and altering their sleeping patterns. Previous research has drawn links between these behavioural changes and proteins found in the seminal fluid, such as the sex-peptide, which is carried in the seminal fluid and binds to sperm. The team were able to determine that females needed to receive sperm to increase their aggression after mating, and sex-peptide was also involved in elevating female aggression.

Copulation may also affect the social tolerance of females in general. Immediately after mating female fruit flies are known to be significantly less receptive to re-mating. Females were found to be equally aggressive towards one another, regardless of whether or not they were able to produce eggs, showing that reproduction was not a contributing factor in their obvious change of temperament.

Dr Stuart Wigby, Research Fellow at Oxford University, said: ‘A lot is known about male fruit fly behaviour and what affects their levels of aggression, but very little has been published about competition among females. Even taken on its own, our study is useful. If these behavioural changes occur in fruit flies, it is highly likely that they are happening in other insects.’ 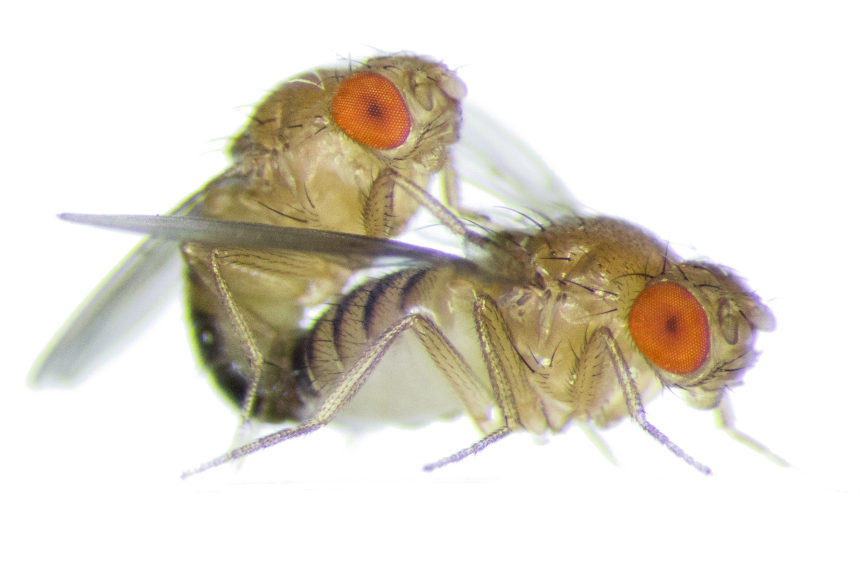 Now that the relationship between mating and aggression in females is better understood, the team intend to conduct further analysis into the effects of the behavioural change, pinpointing the exact time that their intolerance intensifies, and how long the effects of the sex-peptide last. New research will also work to determine whether the effects carry positive or negative benefits to males and females, who the behavioural change benefits and if it is linked to spousal or offspring protection? Dr Eleanor Bath said: ‘Knowing whether female aggression benefits females in the wild could help us to understand fruit fly population dynamics. Potentially having more aggressive females might result in females doing less well in the wild, meaning that we could potentially use female aggression as a behavioural tool to control pest insect populations.’

Dr Stuart Wigby added: ‘A lot of insect control programmes involve releasing sterile males into the wild. When these males mate with wild females, the females fail to produce viable offspring. It could be that mating with these sterile males also affects female aggression levels. Further research will help us to understand exactly how such affects could help or harm populations, and therefore whether or not they can have a wider use.'

Oxford Sparks: What can a power ballad teach us about the sex life of a fruit fly?