Oxford alumnus Professor Michael Kosterlitz has been awarded a share of the Nobel Prize in Physics 2016.

An Oxford alumnus has been awarded a share of the 2016 Nobel Prize in Physics. 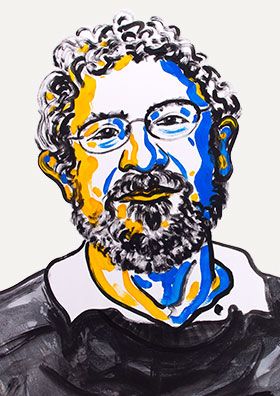 Michael Kosterlitz, who carried out his DPhil at Brasenose College between 1966 and 1969, was today named a Nobel Laureate for his pioneering work to help reveal the secrets of exotic phases of matter that were hitherto unknown.

Professor Kosterlitz, now of Brown University in the US, shared half the prize with Professor Duncan Haldane of Princeton University, USA, with the other half going to Professor David Thouless of the University of Washington, USA.

The Royal Swedish Academy of Sciences, which awards the Nobel Prize in Physics, cited the three scientists' 'theoretical discoveries of topological phase transitions and topological phases of matter'.

The Academy said: 'This year's Laureates opened the door on an unknown world where matter can assume strange states. They have used advanced mathematical methods to study unusual phases, or states, of matter, such as superconductors, superfluids or thin magnetic films. Thanks to their pioneering work, the hunt is now on for new and exotic phases of matter. Many people are hopeful of future applications in both materials science and electronics.

'The three Laureates' use of topological concepts in physics was decisive for their discoveries. Topology is a branch of mathematics that describes properties that only change step-wise. Using topology as a tool, they were able to astound the experts. In the early 1970s, Michael Kosterlitz and David Thouless overturned the then current theory that superconductivity or suprafluidity could not occur in thin layers. They demonstrated that superconductivity could occur at low temperatures and also explained the mechanism, phase transition, that makes superconductivity disappear at higher temperatures.' 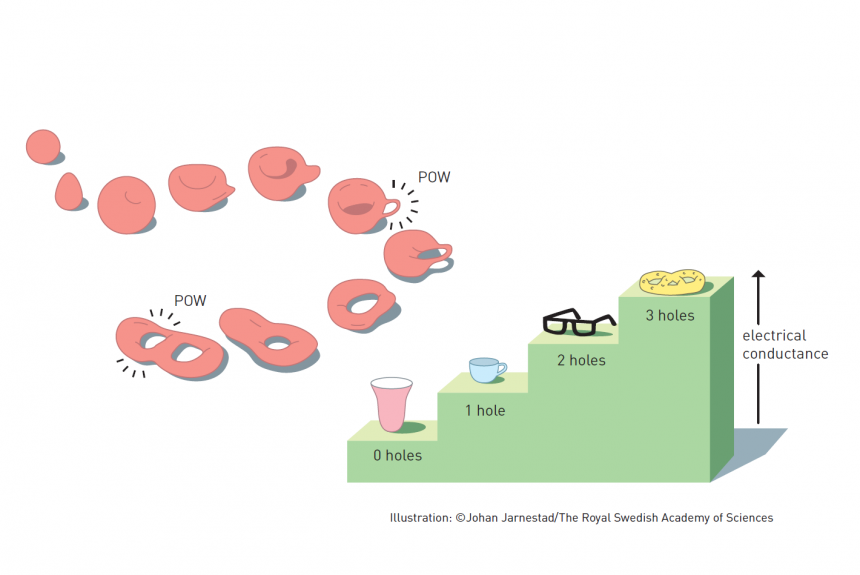 Topologically, a bowl and a mug with a handle belong in different categories.

Frank Close, Professor of Physics at Oxford University and a Fellow of Exeter College, Oxford, shared an office with Professor Kosterlitz when they were studying for their DPhils in Oxford in the late 1960s. He recalled: 'Mike was at that time working in theoretical particle physics from Monday to Thursday, but on Friday he would disappear and head off in his car to the Scottish mountains for the weekend. Mike was an avid climber, and to reduce the likelihood of falling off a rock-face he had a wrist strengthener, which he would squeeze in his left fist while writing with a pen in his right hand (those were the days when people actually wrote on paper rather than typed on laptops). Whenever he paused for thought, he would put down the pen and transfer the wrist strenghener to his right fist.

'After he left Oxford he moved into condensed matter physics and did his great work on what became known as Kosterlitz-Thouless vortices. And he kept climbing. I am delighted that today he has reached the top of another mountain.'

The Academy added: 'We now know of many topological phases, not only in thin layers and threads, but also in ordinary three-dimensional materials. Over the last decade, this area has boosted frontline research in condensed matter physics, not least because of the hope that topological materials could be used in new generations of electronics and superconductors, or in future quantum computers. Current research is revealing the secrets of matter in the exotic worlds discovered by this year’s Nobel Laureates.'

Professor John Wheater, Head of the Department of Physics at Oxford, said: 'The Department is delighted to see one of its alumni honoured by the Nobel Prize committee and warmly congratulates all three winners of this year's Nobel Prize in Physics.'