Governments have been urged to act decisively before 2035 to ensure global warming can be kept below 2°C by 2100.

A team involving Oxford University scientists has, for the first time, discovered tiny magnetic particles from air pollution lodged in human brains – and researchers think they could be a possible cause of Alzheimer's disease.

Researchers led by Lancaster University found abundant magnetite nanoparticles in the brain tissue of 37 individuals aged three to 92 who lived in Mexico City and Manchester. This strongly magnetic mineral is toxic and has been implicated in the production of reactive oxygen species (free radicals) in the human brain, which are associated with neurodegenerative diseases including Alzheimer's disease.

The results have been published in the journal Proceedings of the National Academy of Sciences.

Professor Barbara Maher, from Lancaster Environment Centre, and colleagues (from Oxford, Glasgow, Manchester and Mexico City) used spectroscopic analysis to identify the particles as magnetite. Unlike angular magnetite particles that are believed to form naturally within the brain, most of the observed particles were spherical, with diameters up to 150nm, some with fused surfaces – all characteristic of high-temperature formation, such as from vehicle (particularly diesel) engines or open fires.

The spherical particles are often accompanied by nanoparticles containing other metals, such as platinum, nickel, and cobalt.

Professor Maher said: 'The particles we found are strikingly similar to the magnetite nanospheres that are abundant in the airborne pollution found in urban settings, especially next to busy roads, and which are formed by combustion or frictional heating from vehicle engines or brakes.' 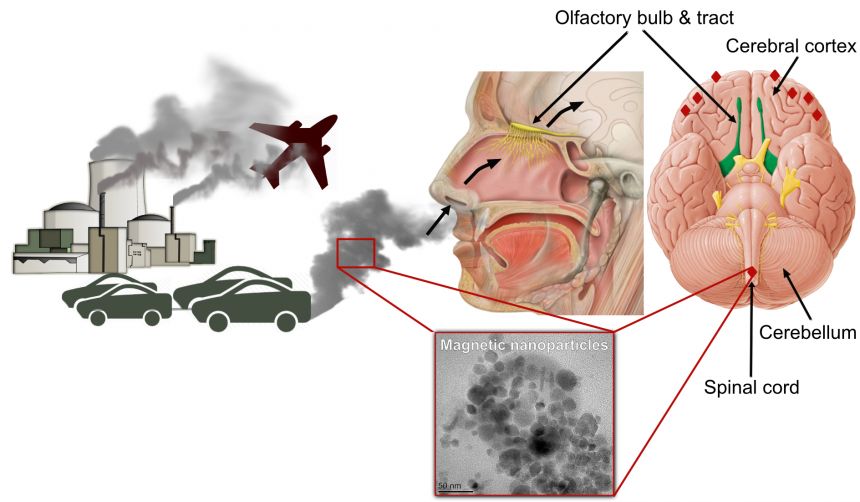 Image showing how magnetic nanoparticles can enter the brain via vehicle pollution.

Co-author and lead experimentalist Dr Imad Ahmed, from Oxford University's Department of Earth Sciences, said: 'Using high-resolution transmission electron microscopy and electron diffraction, we were able to show the presence of extremely tiny crystals having the "unmistakable signature" of magnetite, with sizes ranging from ~10 nm up to 150 nm in diameter. The vast majority of the observed particles were spherical, a key distinction from angular biogenic magnetite that are believed to form naturally in the brain and other organs.

'The amazing thing is that the discovered particles have almost the same shape and surface texture of magnetic particles formed during high-temperature combustion of fossil fuels used in car engines, power stations, or even in the smelting industry. The identification of elements associated with the crystal structure of brain magnetites provides convincing evidence of the high-temperature and pollution origin of these particles.'

Dr Ahmed believes that the identification of pollution-derived brain magnetites has been delayed for years mainly because of the difficulty of isolating the magnetic particles without the introduction of metallic contamination or artefacts during the experiments. One of Dr Ahmed's key contributions to this research was the development of an experimental system for the isolation of nano-magnetites from brain tissues under strictly inert conditions, helping the tiny particles to maintain their structural and chemical identities.

While it is still debated whether the response of brain magnetites to external magnetic fields – such as the Earth's own magnetic field – can cause health damage, Dr Ahmed believes that the outstanding chemical and electrochemical reactivity of magnetites’ surfaces may be the key link to a range of neurodegenerative disorders, such as dementia, Alzheimer's and epilepsy.

Professor Maher added: 'Our results indicate that magnetite nanoparticles in the atmosphere can enter the human brain, where they might pose a risk to human health, including conditions such as Alzheimer's disease.'

The paper 'Magnetite pollution nanoparticles in the human brain' is published in the journal Proceedings of the National Academy of Sciences.