In one of South Africa’s poorest areas, an imaginative new parenting programme is tackling the physical and emotional abuse of children. Oxford University’s Vice-Chancellor, Professor Andrew Hamilton, travelled to the villages of the Eastern Cape to see the results for himself.

Bumping along in the back of a 4X4 down a remote potholed road, the Vice-Chancellor of Oxford University is fired with enthusiasm.

Professor Andrew Hamilton has just visited the township of King Williams Town and its surrounding villages to witness a remarkable new social intervention in action. He has met schoolchildren, clowns and a village chief, all taking part in an initiative to reduce the abuse of children in some of South Africa’s poorest communities.

The intervention, the Sinovuyo Caring Families Project for Parents and Teens, has been devised by researchers from Oxford University working with the University of Cape Town (UCT), UNICEF, the World Health Organisation and the South African Government. Teenagers, their parents and carers meet in groups every week to sing songs, learn relaxation techniques – and to discuss frankly the extreme pressures of family life in a poverty-stricken area where unemployment touches 90 per cent.

A team led by Dr Lucie Cluver, of Oxford’s Department of Social Policy and Intervention, has completed a trial of a 12-week version of the programme involving 130 families from six villages. A larger scale study is under way. Some 500 families – 1000 participants - are taking part in a 14-week version, which now also includes workshops on family budgetary planning.

After an early morning flight from Cape Town and a drive down the often pock-marked roads out of East London, the Vice-Chancellor arrives at Charles Morgan School, in Ginsberg township, once home to Steve Biko. He is introduced to a group of students who took part in last year’s trial. Thembisile Mngxekeza Loza explains what she learned from the sessions, particularly the one on teenage pregnancy and how to stay safe. She wants to go on to study the sciences and train as a pharmacologist at the University of Johannesburg  - an answer which particularly pleases Professor Hamilton, a research chemist as well as a Vice-Chancellor.

Not far from the school, Nobuntu Keyesi, a mother of three, reflects on her year on the Project. Her house, or rondavel, is small – two rooms under a corrugated iron roof - but immaculately kept.  She explains how the sessions taught her about anger control, how to talk softly to a child rather than shout, how to explain to them the dangers of drugs. 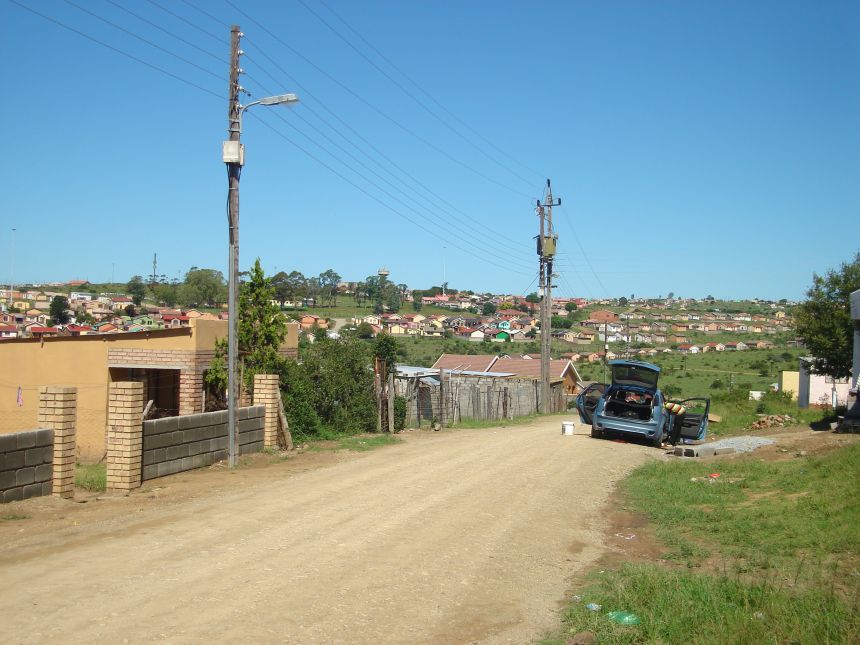 Nobuntu says: ‘It has changed things a lot. My children know when it is OK to go out now and when they must come home from playing. The rondavel feels warm inside now.’ Word has got round the community – now the next door neighbour wants to join up for the project.

To demonstrate one of the session’s songs, Nobuntu breaks into Thuthuwe, about a father’s love for his son. She is accompanied by Sibongile Tsoanyane, one of the perfomers from the charity Clowns without Borders South Africa, who lead the group sessions. 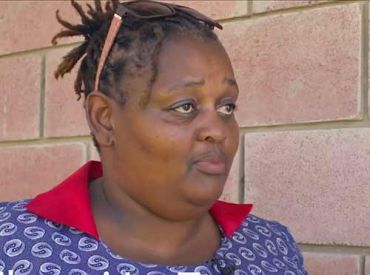 Later, Sibongile, or Sbo, explains her involvement with the Sinovuyo project. Originally a performer with Cirque du Soleil, she joined Clowns without Borders in Durban eight years ago. She says: ‘I never thought of myself as someone who could make people laugh, but I learned clowning and found that I could do it. Sinovuyo involves a lot of teaching, but being funny is also part of it.

‘All the songs we sing at the sessions are things we have created to get people to participate, to make sure everyone’s mind is in the same place. We also have games to energise people, which we make sure are relevant to the day’s core lesson.’

Sibongile explains to Professor Hamilton how, over the course of the programme, she can see a physical change in participants. She says: ‘When people start, they look dark, they’re frowning, stressed. But you can tell a very big change comes over them. Their appearance lightens, they gain weight. You can see them become a community, taking care of each other. It’s amazing.’

Back at the project’s headquarters in King Williams Town, training is under way for local researchers. They will be asked to collect answers to questionnaires with the families taking part in the next phase of the trial and get to practice on members of the Vice-Chancellor’s party. The questions come as something of a culture shock – how many times have you seen someone with a knife in the last month? Volunteer Deneo Sephula, asked the same question in return, says her village, Bisho, is ‘not so bad, but it does happen.’ Deneo adds she was motivated to volunteer as she wants to see more teenagers from her village involved in the programme.

It’s a sudden reminder, for all the hope and achievement witnessed so far, of the problems still facing the villages of the Eastern Cape, and others like them. Dr Cluver underlines this: ‘What we are trying to tackle is child abuse. Sub-Saharan Africa is one of the most affected areas in the world. Not because the people are worse, but because of the scale of the problems they face. The parents are poor, children are sick, it all becomes a very stressful combination. The communities are dangerous places for teenagers. Girls can be sexually abused just walking to school. Or they can go outside to the toilet and get grabbed from the bushes.’

UNICEF invited Dr Cluver’s team to pilot, then trial the programme in the Eastern Cape. The Oxford team are working in partnership with Cathy Ward, a psychologist and associate professor at the University of Cape Town. Professor Ward is also leading on the trial of a similar intervention with younger children and their parents. 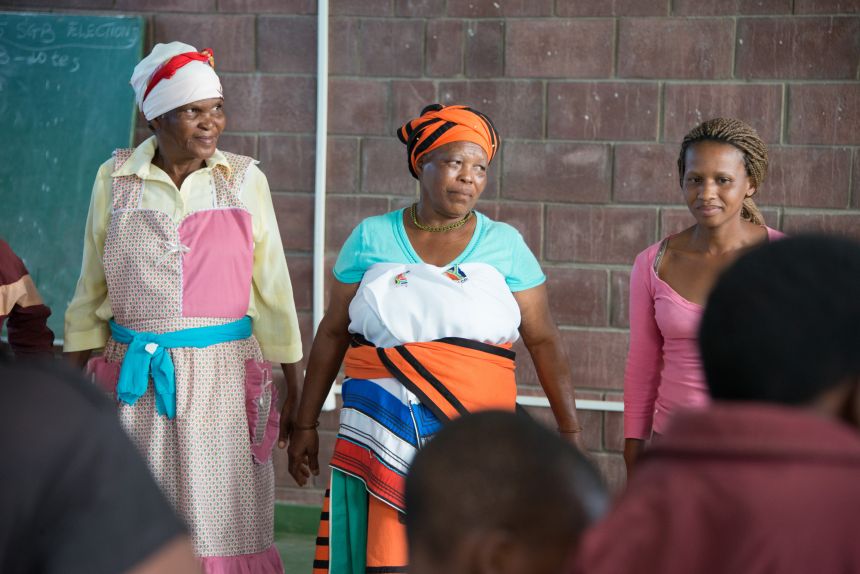 Professor Ward makes the point that similar programmes do operate around the world, but they are proprietary and communities have to pay for them. The Oxford-developed programme is free, which has heightened interest in a number of countries, including the Phillippines, Papua New Guinea and Lesotho. The South African Government already wants to roll it out elsewhere in the Eastern Cape while Dr Cluver and her team continue the trial around King Williams Town.

The Vice-Chancellor’s day ends with a visit to a group session in the village of Rhamnyiba. In the small church hall, he first meets the local chief, Ernest Mene, thanking him for the community support which is vital to the project success. Then Sibongile begins the group session with singing and dancing, with Professor Hamilton in the midst. This is the new part of the programme, dealing with financial planning in a part of the world where many do not possess a bank account. 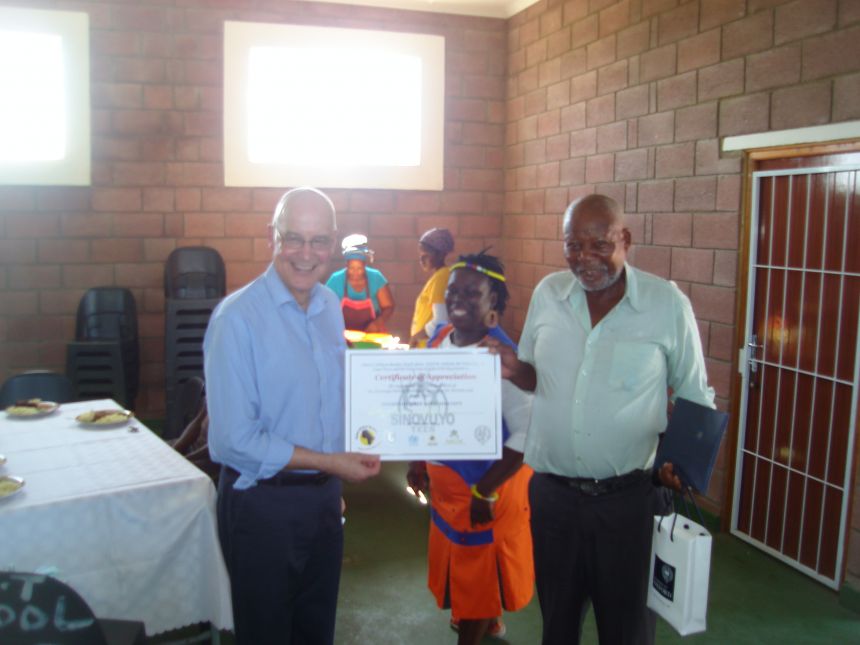 The energy Sibongile brings to the group is marked, evidence of why last year’s trial results look so promising. Dr Cluver says: ‘Over the course of the 12 weeks, families learned about positive parenting, such as how to praise one another, and manage anger without resorting to hitting or beating. They were encouraged to create a warmer, more loving relationship with one another. This in turn means that the teenagers are at less risk of being involved in community violence, because they’re more likely to enjoy spending time at home, and therefore spend less risky time in community environments.’

In the end, Professor Hamilton has to be coaxed away from the session by his support team, mindful of flight times. Back in the 4X4, heading for the airport, the Vice-Chancellor remains struck by what he has seen – huge problems, but also the energy and passion of those trying to tackle them.

The Vice-Chancellor says: ‘It’s been brilliant. I’ve seen how Sbo has been engaging families, mothers with children, a couple of fathers. We began with exercises, then there was dancing – Sbo got me into the middle – but you could see it was working towards a serious point, getting families talking about their feelings.

‘We’re out here in one of the poorest regions of South Africa. If you look around, the poverty is tangible. Oxford’s social policy and intervention researchers have just been ranked number one in the UK, but it’s only when you get out here on the ground that you see what that actually means. Our academics are enjoying these programmes but they’re also rigorously assessing them with the fundamental aim of reducing child abuse. It means that Oxford academics, working with partners at the University of Cape Town,  are providing evidence which can then feed into policy-making in South Africa and beyond.’