Migrating birds 'share the pain' of the arduous task of leading a v-formation, so that they can then take turns saving energy by following in another bird's wake, a new study shows.

The research, by an international team led by Oxford University scientists, is the first convincing evidence for 'turn taking' reciprocal cooperative behaviour in birds. It is also only the second good example of reciprocal cooperation in animals, following a study that revealed how vampire bats shared blood to keep other unrelated individuals alive.

The team studied 14 juvenile Northern bald ibis (Geronticus eremita) migrating from Salzburg in Austria to Orbetello in Italy. The 'human-imprinted' birds followed a powered parachute carrying their handlers. Tiny 23g data loggers worn by each bird enabled the researchers to examine how individuals within a flying v-formation interacted. 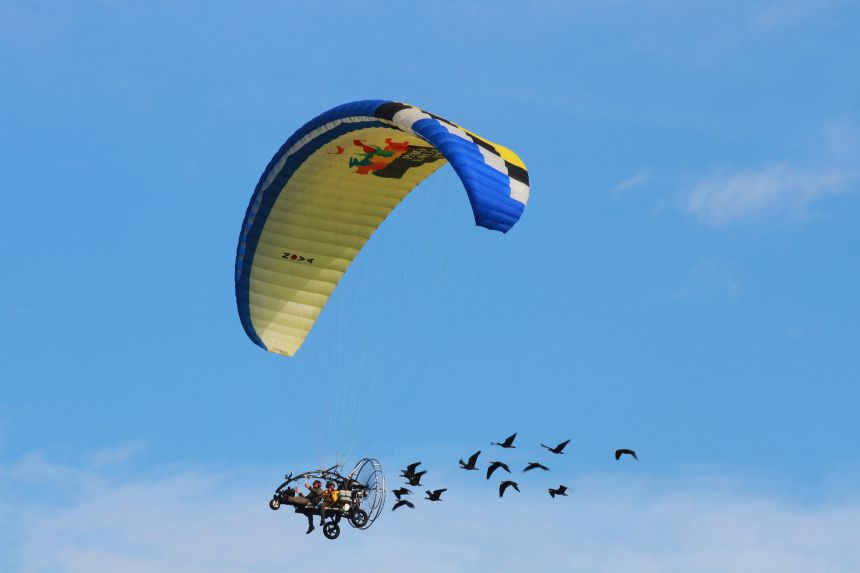 A powered parachute was used to lead the flock of ibis

Although the human-imprinted birds followed a powered parachute the experiment was designed to replicate the behaviour of wild ibis where juveniles from the same location tend to migrate together. The behaviour of the ibis from the study, including group size and travelling speed, closely matches that of wild flocks.

The researchers found that individual birds changed position frequently within the flock, flying in formations of 2 to 12 birds. Overall, individuals spent an average of 32% of their time benefiting by flying in the updraft produced by another bird's flapping wings and a proportional amount of time leading a formation.

A report of the research is published in the journal PNAS.

Migrations are inherently risky for birds: previous research suggests that up to 35% of juvenile birds can die of exhaustion on their first migration. Flying in formation can help to save vital energy: it is estimated geese can make energy savings of 10-14% by gaining lift from flying in the updraft of other birds.

The team investigated why supposedly 'selfish' individuals would 'altruistically' use up more of their energy leading a formation and how flocks guard against 'free-loaders' benefitting from travelling in the wake of other birds without ever leading themselves.

'Our study shows that the 'building blocks' of reciprocal cooperative behaviour can be very simple: ibis often travel in pairs, with one bird leading and a 'wingman' benefiting by following in the leader’s updraft,' said lead author Dr Bernhard Voelkl of Oxford University’s Department of Zoology. 'We found that in these pairs individuals take turns, precisely matching the amount of time they spend in the energy-sapping lead position and the energy-saving following position.'

Even by travelling in a pair the energy costs for both individuals are reduced, whilst larger formations bring even greater energy savings (although large formations are more unstable). 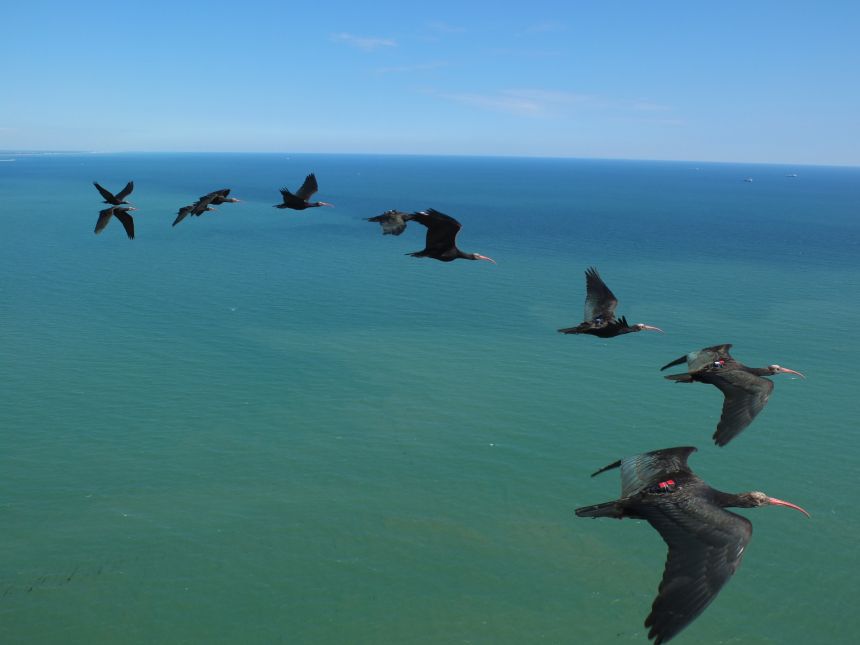 'We found that larger formations of ibis were still made up of these 'turn-taking’ pairs,' said Dr Voelkl. ‘The checking that went on within these pairs was sufficient on its own to prevent any freeloaders hitching a free ride within a v-formation without leading. In fact, surprisingly, we found no evidence of 'cheating' of any kind within these flocks with the level of cooperation, with individuals benefiting from following 32% of the time, significantly higher than expected.

'We think that it is the extreme risks associated with long migration journeys that have driven the evolution of such cooperative behaviour where something like saving 10% of your energy can make the difference between life and death.'

Further studies are planned to see how the cooperative behaviour of the juvenile ibis develops over time and whether they learn to fine-tune their energy-saving tactics. The team also say more research is needed to quantify the energy-saving benefits for individuals by fitting the birds with sensors to, for instance, monitor heart rate and respiration. 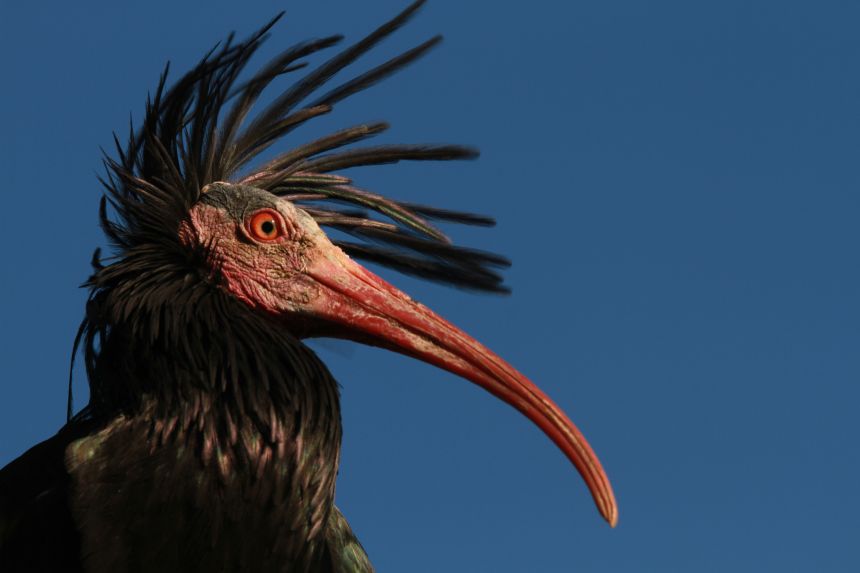 A report of the research, entitled 'Matching times of leading and following suggest cooperation through direct reciprocity during v-formation flight in ibis' is published in PNAS.