An investigation of a 415 million year-old fish skull strongly suggests that the last common ancestor of all jawed vertebrates, including humans, was not very shark-like. It adds further weight to the idea that sharks are not 'primitive'.

The fossil skull's external features meant it had always been thought to belong to the bony fishes (osteichthyans), a group which includes familiar fishes such as cod and tuna as well as all land-dwelling creatures with backbones. But when scientists from Oxford University and Imperial College London used X-ray CT scanning to look inside the skull they found the structure surrounding the brain was reminiscent of cartilaginous fishes (chondrichthyans) such as sharks and rays. The fish fossil's 'two faces' led to it being named Janusiscus after the double-faced Roman god Janus.

A report of the research is published in the journal Nature.

'This 415 million year-old fossil gives us an intriguing glimpse of the 'Age of Fishes', when modern groups of vertebrates were really beginning to take off in an evolutionary sense,' said Dr Matt Friedman of Oxford University's Department of Earth Sciences, an author of the report. 'It tells us that the ancestral jawed vertebrate probably doesn't fit into our existing categories.'

Chondrichthyans have often been viewed as primitive, and treated as proxies for what the ‘ancestral’ jawed vertebrate would have looked like. A key component of this view is the lack of a bony skeleton in cartilaginous fishes.

'The results from our analysis help to turn this view on its head: the earliest jawed vertebrates would have looked somewhat more like bony fishes, at least externally, with large dermal plates covering their skulls,' said Sam Giles of Oxford University's Department of Earth Sciences, first author of the report. 'In fact, they would have had a mix of what are now viewed as cartilaginous- and bony fish-like features, supporting the idea that both groups became independently specialised later in their separate evolutionary histories.'

Dr Friedman said: 'This mix of features, some reminiscent of bony fishes and others cartilaginous fishes, suggests that humans may have just as many features that you might call 'primitive' as sharks.'

The fossil skull was originally found near the Sida River in Siberia in 1972 and is currently held in the Institute of Geology at the Tallinn University of Technology, Estonia. Study author Martin Brazeau of Imperial College London spotted the specimen in an online catalogue and the team decided it would be worth studying in greater detail using modern investigative techniques.

The team then used X-ray CT (computed tomography) to 'virtually' cut through the fossil. Different materials attenuate X-rays to different amounts – just as in a hospital X-ray, bones show up brighter than muscles and skin. This same principle can be applied to fossils, as fossilised bone and rock attenuate X-rays to different degrees. This technique was used to build a 3D virtual model of the fossil, enabling its internal and external features to be examined in great detail. Traces left by networks of blood vessels and nerves, often less than 1/100th of a centimetre in diameter, could then be compared to structure in a variety of jawed vertebrate groups, including sharks and bony fishes.

'Losing your bony skeleton sounds like a pretty extreme adaptation,' said Dr Friedman, 'but with remarkable discoveries from China, Janusiscus strongly suggests that that the ancient ancestors of modern sharks and their kin started out just as 'bony' as our own ancestors.' 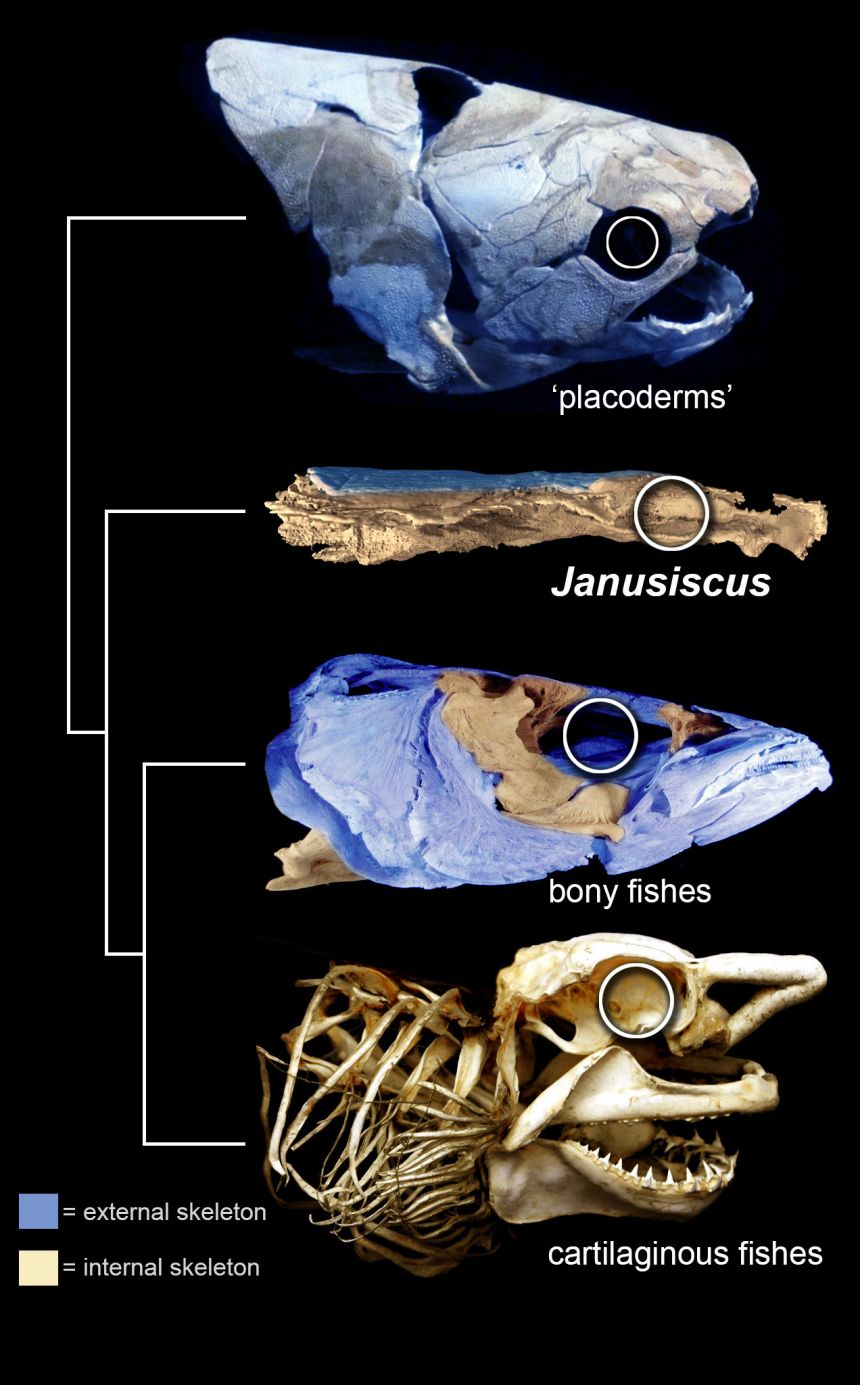 The 415 million year old fish Janusiscus provides critical evidence for a well-developed external skeleton (shown in blue) in the shared ancestor of bony fishes and cartilaginous fishes such as sharks.

A report of the research, entitled 'Osteichthyan-like cranial conditions in an Early Devonian stem gnathostome' is published online in Nature.