A new hepatitis C vaccine has shown promising results in an early clinical trial at Oxford University, generating strong and broad immune responses against the virus causing the disease.

The vaccine was found to be very safe and well tolerated in the 15 healthy human volunteers who took part in the phase 1 safety trial.

A trial to test the efficacy of the vaccine is now underway among intravenous drug users in two sites in the USA. It is the first hepatitis C vaccine to reach this stage of clinical trials.

The aim is to see if the vaccine is able to offer any protection from infection in this group at high risk of hepatitis C compared with placebo.

'The size and breadth of the immune responses seen in the healthy volunteers are unprecedented in magnitude for a hepatitis C vaccine,' says principal investigator Professor Ellie Barnes of the Nuffield Department of Medicine at Oxford University.

The Oxford University team, with colleagues from the Italian biotechnology company Okairos (now part of GSK) and Stanford University in the USA, have published their results in the journal Science Translational Medicine.

The T cell response is really high, and what's promising is that this is a broad response.

The study was funded by the Medical Research Council and the European Union, with support from the Oxford Martin School at the University of Oxford and the National Institute for Health Research Oxford Biomedical Research Centre.

It is thought that around 180 million people around the world are infected with hepatitis C, with up to 300,000 people estimated to be infected in the UK.

Hepatitis C is a chronic infection where the virus stays in the body for many years. It is a leading cause of liver cirrhosis (untreated, between 10% and 40% of people with hepatitis C will go on to develop liver cirrhosis), and can in some cases lead to liver failure and liver cancer.

However, on first infection, around 1 in 4 people are naturally able to clear the virus from their body. This suggests that it is possible for the body to mount an immune response to fight off the infection.

Recently, new drugs have been developed that are effective against a number of strains (or genotypes) of hepatitis C. But they are expensive and require a prolonged course of treatment. Having an effective vaccine as well could make an enormous difference to preventing infection with hepatitis C. 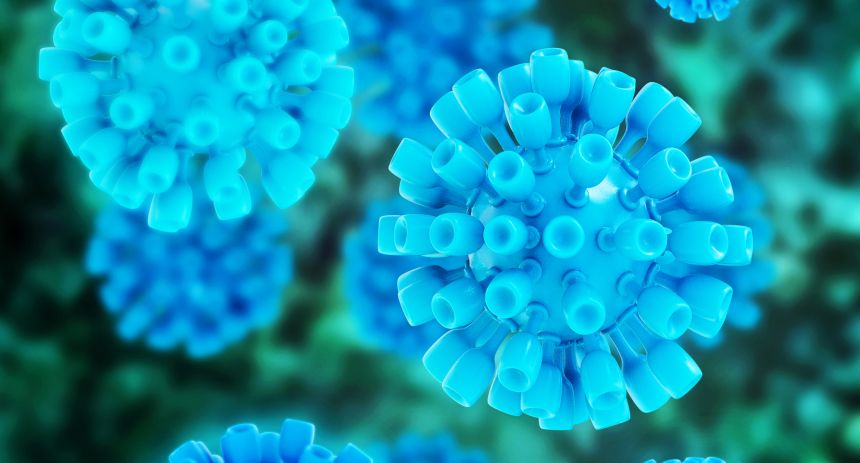 Illustration of a hepatitis C virus

The vaccine strategy developed by the Oxford University team uses two separate vaccine formulations. The approach is designed to first stimulate, or 'prime', an initial immune response against the hepatitis C virus with the first vaccine. Then eight weeks later, the second vaccine aims to 'boost' the immune response to a level that would offer protection against infection.

In particular, the vaccines are designed to generate a strong T cell immune response against the hepatitis C virus, as it is T cells that are found to be important in those people who are able to naturally clear the virus.

The study found that the T cell responses seen in the volunteers who received the prime-boost vaccine were large, broad and sustained over the 6 months of the study. They were comparable to those seen in people who are naturally able to clear hepatitis C infection, although the level of T cell response needed to prevent infection is not known.

'The T cell response is really high, and what's promising is that this is a broad response. A range of different T cells are produced targeting different parts of the hepatitis C virus,' says Professor Barnes. 'This is the first highly immunogenic T cell vaccine developed against hepatitis C. We found it to be safe and well tolerated in this group of 15 healthy volunteers. But we won't really know if it works – if it is able to prevent hepatitis C infection – until we have the results of the efficacy studies in the USA.'