The Hawick Missal Fragment, which inspired the new composition
Published

An unusual collaboration between a renowned DJ and an Oxford University academic has created a modern composition based on a recently-discovered piece of medieval music.

The piece has been written by electronic artist Goldie and takes its inspiration from the Hawick Missal Fragment, an extract of medieval music which was discovered in 2009 and reconstructed by Dr Matthew Cheung Salisbury of Oxford University’s Music Faculty.

The new piece, a fusion of modern and classical which uses sampling and electronic manipulation of sound in addition to medieval chant and a cello, will be performed for the first time on 30 August at Glasgow Cathedral in a performance made possible by Historic Scotland. Musicians from Oxford University and across Scotland will give a live performance of the track which was orchestrated by Dr Salisbury.

'Working with Goldie has been a fascinating process,' said Dr Salisbury. 'When I played him the classical recordings of the medieval music, he immediately began to get a feel for individual motifs and strands of melody that he then knit together to form a song. It is surely a first for a DJ to sequence and mash-up medieval music!'

After the fragment of a medieval manuscript was found in the Scottish Borders in 2009, Dr Salisbury analysed the fragment to find that it came from a Missal, the liturgical book that contained the texts used by the priest for Mass and other items sung by the choir. He created a musical score from the extract, which was then performed and recorded by a choir in Oxford.

Over the last year the rediscovered chants as well as new compositions inspired by it  have been performed in Jedburgh Abbey, Kelso Abbey, and Melrose Abbey. Dr Salisbury said these performances have helped his research by providing new insights into the Hawick Missal Fragment.

'Performing the music in majestic semi-ruinous abbeys in the Scottish Borders has really helped me to understand more about the manuscript because these are the sort of buildings where the Missal would have been used,' he said. 'The manuscript gives directions and locations for the service, but only by reconstructing the performance in the kind of building it was written for can we properly understand the meaning of these instructions.

'It reveals the Missal to be instructions for a living rite that changed from place to place and time to time, not a fixed, prescriptive set of instructions. Adapting the rite to three different venues makes you consider what is important about this rite and how it transfers from place to place. We now know the Missal would have been suitable from a range of venues, from small churches to majestic abbeys.'

'In one place, for instance, the manuscript may tell the reader to turn left – but what if you can’t turn left in a particular venue? Performing live has shown us that practical considerations were essential.'

Dr Salisbury also said that working with Goldie has taught him something new about medieval music. He explained: 'Medieval music is thought of as something that is very foreign and incapable of being understood, but seeing Goldie and three other composers use the medieval melodies as source material for a fresh piece of music shows how the modern ear receives medieval music and that it is more universal than it is given credit for.'

Dr Salisbury specialises in identifying medieval manuscripts and trying to work out where manuscripts were used and how they were performed. He faced a difficult task in analysing the Hawick Missal Fragment because only about four pages of material were discovered from what may have been a 400 page book.

Goldie said: 'It was a fascinating and very interesting task to produce an electronic work with many classical elements from such a wonderful ancient artefact that being the fragment of 12th century manuscript. To see and hear the piece evolve and then be re-notated and scored for orchestra and choir by Dr Matthew Cheung Salisbury is simply immense and makes the hairs on my arm stand up. It's probably one of the most emotional and powerful pieces of music I have ever written.'

The performances in the Scottish abbeys and Glasgow Cathedral were made possible by Historic Scotland and the Heart of Hawick Heritage Hub and funded by Creative Scotland. In addition to Goldie's composition, Michael Nyman, Grayston Ives and Séan Doherty have also composed new works of music inspired by the fragment. 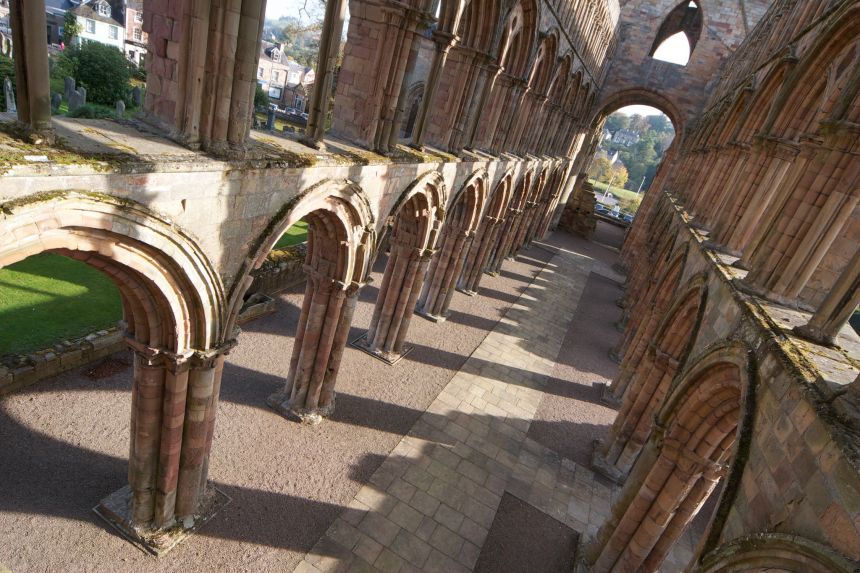 An earlier concert was held at Jedburgh Abbey, which is the sort of venue where the original piece might have been played
Tom Parnell (Flickr)