Two projects involving Oxford University technology are among the ten finalists in the 2014 Google Impact Challenge, and you can vote to help decide the winners.

The two projects are:

Smart glasses for people with sight loss to make the most of their remaining vision – a partnership between the Royal National Institute of Blind People and a research team in the Nuffield Department of Clinical Neurosciences led by Dr Stephen Hicks; and

The Google Impact Challenge is a UK competition which aims to support non-profit organisations ‘using technology to tackle problems and transform lives around the world’. It is run by Google.org – the part of the tech company which provides grants and support to nonprofits – with support from NESTA, the UK innovation charity.

Each of the ten projects selected as finalists will receive £200,000 to help take their vision forward.

The four winning projects – one decided by public vote and the other three by a panel of judges – will receive £500,000 of the projects. The judges include founder of Wikipedia Jimmy Wales and the entrepreneur Peter Jones of BBC Dragons' Den fame.

The online competition site allows everyone to vote for up to four projects, and the results will be announced on the 31 July.

Smart glasses to improve life for people with sight loss

Dr Hicks’ group at Oxford University, with the help and support of RNIB, has been developing smart glasses that enable those with very limited vision to make use of what sight remains. Their improving prototypes have recently been tried out by volunteers in Oxford’s Covered Market, showing how they can help the wearer identify faces and obstacles more clearly.

There are almost 2 million people in the UK living with sight loss that has a significant impact on their daily lives. Over 90% of these individuals have some remaining vision.

The RNIB with Google Impact Challenge funding hopes to be able to provide smart glasses prototypes to a few hundred people living with sight loss around the UK. This will enable the researchers to see how people use the glasses in daily life and to guide the future development of the glasses towards a low-cost version with additional functionality for visually impaired people around the world. The research and development of the glasses has previously received funding from the National Institute for Health Research and the Royal Society. 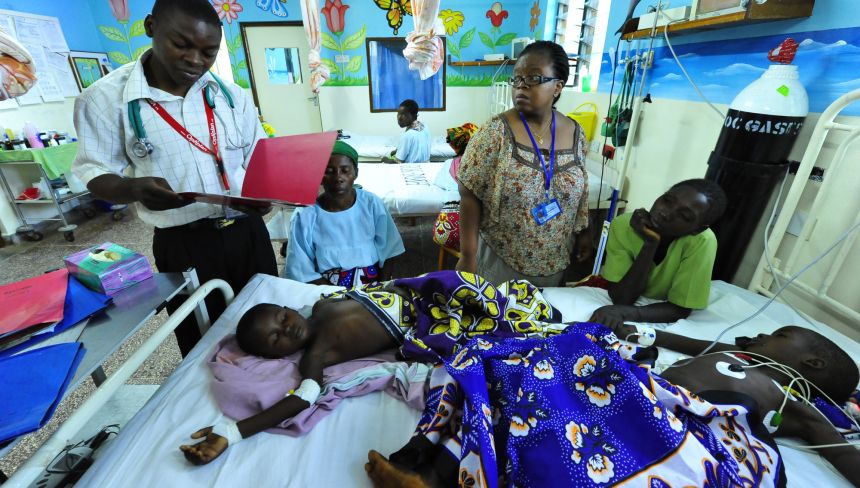 Malaria kills over 600,000 people every year and is a particular threat to young children
Pediatric High Dependency Unit, Kilifi District Hospital Children attended to by Dr Neema Mturi. The KEMRI-Wellcome Trust Research Programme is a partnership between KEMRI, Oxford University and the Wellcome Trust. It conducts basic, epidemiological and clinical research from its headquarters in the rural district of Kilifi, Kenya Copyright © Alex Kamweru / Oxford University Images -- All rights reserved.

Kew Gardens will work with Oxford University over the next three years to create a smartphone app and a range of wearable acoustic detectors to detect the sound of mosquitoes. The group will then equip villagers in rural Indonesia with the novel technology.

Each mosquito species has its own wing beat with a unique sound. This allows the research team to record the occurrence of different species, as well as daily readings of temperature and humidity. Combined with detailed vegetation maps, this will be able to track disease-bearing mosquitoes with the aim of preventing and managing outbreaks of mosquito-borne disease.

Mosquitoes are responsible for the spread of some of the most deadly and costly diseases, including dengue and malaria. More than half the world’s population live in areas where they are routinely exposed to disease-carrying mosquitoes. Governments, international agencies and charities spend billions of pounds on global efforts to control mosquito populations, protect people and livestock, and treat those infected.

To be effective in controlling the spread of disease, these programmes need reliable data on which species of mosquito occur in a given location, and what attracts them there in the first place. This project aims gets to the heart of understanding these different factors.

Using the data generated from the smartphone app and wearable sensors, the researchers hope to provide guidance for health and environment authorities in Indonesia on how to modify current mosquito control programmes, introduce new measures and manage the landscape to deter mosquitoes.

The researchers say the prototype technology has the potential to be rolled out everywhere that mosquito-borne diseases pose a threat to life.