Oxford University researchers have developed a simple and quick MRI technique that offers promise for early diagnosis of Parkinson's disease.

The new MRI approach can detect people who have early-stage Parkinson's disease with 85% accuracy, according to research published in Neurology, the medical journal of the American Academy of Neurology.

'At the moment we have no way to predict who is at risk of Parkinson's disease in the vast majority of cases,' says Dr Clare Mackay of the Department of Psychiatry at Oxford University, one of the joint lead researchers. 'We are excited that this MRI technique might prove to be a good marker for the earliest signs of Parkinson's. The results are very promising.'

Claire Bale, research communications manager at Parkinson's UK, which funded the work, explains: 'This new research takes us one step closer to diagnosing Parkinson's at a much earlier stage – one of the biggest challenges facing research into the condition. By using a new, simple scanning technique the team at Oxford University have been able to study levels of activity in the brain which may suggest that Parkinson's is present. One person every hour is diagnosed with Parkinson's in the UK, and we hope that the researchers are able to continue to refine their test so that it can one day be part of clinical practice.' 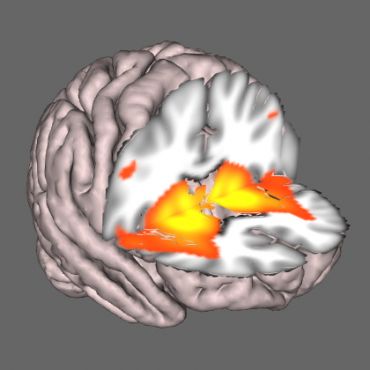 Parkinson's disease is characterised by tremor, slow movement, and stiff and inflexible muscles. It's thought to affect around 1 in 500 people, meaning there are an estimated 127,000 people in the UK with the condition. There is currently no cure for the disease, although there are treatments that can reduce symptoms and maintain quality of life for as long as possible.

Parkinson's disease is caused by the progressive loss of a particular set of nerve cells in the brain, but this damage to nerve cells will have been going on for a long time before symptoms become apparent.

If treatments are to be developed that can slow or halt the progression of the disease before it affects people significantly, the researchers say, we need methods to be able to identify people at risk before symptoms take hold.

Conventional MRI cannot detect early signs of Parkinson's, so the Oxford researchers used an MRI technique, called resting-state fMRI, in which people are simply required to stay still in the scanner. They used the MRI data to look at the 'connectivity', or strength of brain networks, in the basal ganglia – part of the brain known to be involved in Parkinson's disease.

The team compared 19 people with early-stage Parkinson's disease while not on medication with 19 healthy people, matched for age and gender. They found that the Parkinson’s patients had much lower connectivity in the basal ganglia.

The researchers were able to define a cut-off or threshold level of connectivity. Falling below this level was able to predict who had Parkinson's disease with 100% sensitivity (it picked up everyone with Parkinson's) and 89.5% specificity (it picked up few people without Parkinson's – there were few false positives).

Dr Mackay explains: 'Our MRI approach showed a very strong difference in connectivity between those who had Parkinson’s disease and those that did not. So much so, that we wondered if it was too good to be true and carried out a validation test in a second group of patients. We got a similar result the second time.'

The scientists applied their MRI test to a second group of 13 early-stage Parkinson's patients as a validation of the approach. They correctly identified 11 out of the 13 patients (85% accuracy).

'We think that our MRI test will be relevant for diagnosis of Parkinson's,' says joint lead researcher Dr Michele Hu of the Nuffield Department of Clinical Neurosciences at Oxford University and the Oxford University Hospitals NHS Trust. 'We tested it in people with early-stage Parkinson's. But because it is so sensitive in these patients, we hope it will be able to predict who is at risk of disease before any symptoms have developed. However, this is something that we still have to show in further research.'

To see if this is the case, the Oxford University researchers are now carrying out further studies of their MRI technique with people who are at increased risk of Parkinson's.