A false colour image of the Cassiopeia A supernova
Image: NASA/JPL-Caltech
Published

Laser beams 60,000 billion times more powerful than a laser pointer have been used to recreate scaled supernova explosions in the laboratory as a way of investigating one of the most energetic events in the Universe.

Supernova explosions, triggered when the fuel within a star reignites or its core collapses, launch a detonation shock wave that sweeps through a few light years of space from the exploding star in just a few hundred years. But not all such explosions are alike and some, such as Cassiopeia A, show puzzling irregular shapes made of knots and twists.

To investigate what may cause these peculiar shapes an international team led by Oxford University scientists (groups of Professor Gregori and Professor Bell in Atomic and Laser Physics, and Professor Schekochihin in Theoretical Physics) has devised a method of studying supernova explosions in the laboratory instead of observing them in space.

'It may sound surprising that a table-top laboratory experiment that fits inside an average room can be used to study astrophysical objects that are light years across,' said Professor Gianluca Gregori of Oxford University's Department of Physics, who led the study published in Nature Physics. 'In reality, the laws of physics are the same everywhere, and physical processes can be scaled from one to the other in the same way that waves in a bucket are comparable to waves in the ocean. So our experiments can complement observations of events such as the Cassiopeia A supernova explosion.'

The Cassiopeia A supernova explosion was first spotted about 300 years ago in the Cassiopeia constellation 11,000 light years away, its light has taken this long to reach us. The optical images of the explosion reveal irregular 'knotty' features and associated with these are intense radio and X-ray emissions. Whilst no one is sure what creates these phenomena one possibility is that the blast passes through a region of space that is filled with dense clumps or clouds of gas.

To recreate a supernova explosion in the laboratory the team used the Vulcan laser facility at the UK's Science and Technology Facilities Council's Rutherford Appleton Lab. 'Our team began by focusing three laser beams onto a carbon rod target, not much thicker than a strand of hair, in a low density gas-filled chamber,' said Ms Jena Meinecke an Oxford University graduate student, who headed the experimental efforts.  The enormous amount of heat generated more than a few million degrees Celsius by the laser caused the rod to explode creating a blast that expanded out through the low density gas. In the experiments the dense gas clumps or gas clouds that surround an exploding star were simulated by introducing a plastic grid to disturb the shock front.

'The experiment demonstrated that as the blast of the explosion passes through the grid it becomes irregular and turbulent just like the images from Cassiopeia,' said Professor Gregori. 'We found that the magnetic field is higher with the grid than without it. Since higher magnetic fields imply a more efficient generation of radio and X-ray photons, this result confirms that the idea that supernova explosions expand into uniformly distributed interstellar material isn't always correct and it is consistent with both observations and numerical models of a shockwave passing through a 'clumpy' medium.' 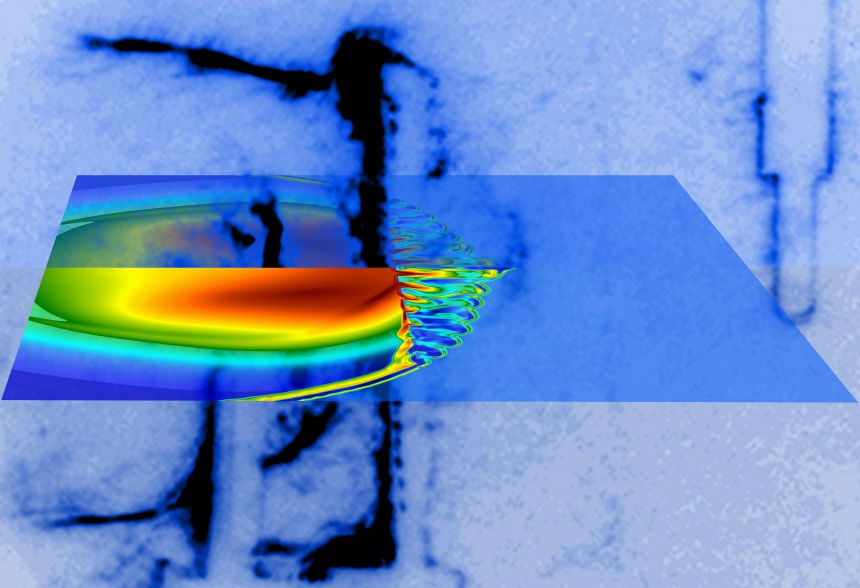 Laser beams illuminate a small carbon rod and launch an asymmetric shock inside a chamber filled with argon gas. A grid is placed in the shock's path, 1 centimetre from the target, resulting in turbulent flow. The shock and the turbulent flow is captured with the Schlieren imaging technique (blue-black hues) at 300 billionth of a second after the laser shot. The electron density predicted by computer simulations (blue-red hues) is superimposed.

'Magnetic fields are ubiquitous in the universe,' said Don Lamb, the Robert A. Millikan Distinguished Service Professor in Astronomy & Astrophysics at the University of Chicago. 'We're pretty sure that the fields didn't exist at the beginning, at the Big Bang. So there’s this fundamental question: how did magnetic fields arise?' These results are significant because they help to piece together a story for the creation and development of magnetic fields in our Universe, and provide the first experimental proof that turbulence amplifies magnetic fields in the tenuous interstellar plasma.

The advance was made possible by the extraordinarily close cooperation between the teams performing the experiments and the computer simulations. 'The experimentalists knew all the physical variables at a given point. They knew exactly the temperature, the density, the velocities,' said Petros Tzeferacos of the University of Chicago, a study co-author. 'This allows us to benchmark the code against something that we can see.' Such benchmarking – called validation – shows that the simulations can reproduce the experimental data. The simulations consumed 20 million processing hours on supercomputers at Argonne National Laboratory, in the USA.

Funding for this research was provided by the European Research Council, the UK’s Science and Technology Facilities Council, and the US Department of Energy through the Innovative and Novel Computational Impact on Theory and Experiment (INCITE) program.