A global map detailing the genetic histories of 95 different populations across the world, showing likely genetic impacts of European colonialism, the Arab slave trade, the Mongol Empire and European traders near the Silk Road mixing with people in China, has been revealed for the first time.

The interactive map, produced by researchers from Oxford University and UCL (University College London), details the histories of genetic mixing between each of the 95 populations across Europe, Africa, Asia and South America spanning the last four millennia.

The study, published this week in Science, simultaneously identifies, dates and characterises genetic mixing between populations. To do this, the researchers developed sophisticated statistical methods to analyse the DNA of 1490 individuals in 95 populations around the world. The work was chiefly funded by the Wellcome Trust and Royal Society.

'DNA really has the power to tell stories and uncover details of humanity's past,' said Dr Simon Myers of Oxford University's Department of Statistics and Wellcome Trust Centre for Human Genetics, co-senior author of the study.

'Because our approach uses only genetic data, it provides information independent from other sources. Many of our genetic observations match historical events, and we also see evidence of previously unrecorded genetic mixing. For example, the DNA of the Tu people in modern China suggests that in around 1200CE, Europeans similar to modern Greeks mixed with an otherwise Chinese-like population. Plausibly, the source of this European-like DNA might be merchants travelling the nearby Silk Road.' 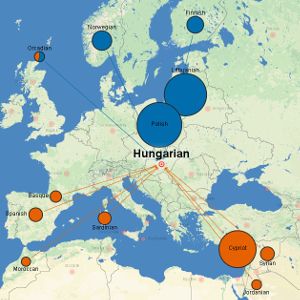 Map showing the genetic similarities between modern Hungarians and other populations. The data suggest that the populations mixed around 830CE.
Image: Gavin Band

The powerful technique, christened 'Globetrotter', provides insight into past events such as the genetic legacy of the Mongol Empire. Historical records suggest that the Hazara people of Pakistan are partially descended from Mongol warriors, and this study found clear evidence of Mongol DNA entering the population during the period of the Mongol Empire. Six other populations, from as far west as Turkey, showed similar evidence of genetic mixing with Mongols around the same time.

'What amazes me most is simply how well our technique works,' said Dr Garrett Hellenthal of the UCL Genetics Institute, lead author of the study. 'Although individual mutations carry only weak signals about where a person is from, by adding information across the whole genome we can reconstruct these mixing events. Sometimes individuals sampled from nearby regions can have surprisingly different sources of mixing.

'For example, we identify distinct events happening at different times among groups sampled within Pakistan, with some inheriting DNA from sub-Saharan Africa, perhaps related to the Arab Slave Trade, others from East Asia, and yet another from ancient Europe. Nearly all our populations show mixing events, so they are very common throughout recent history and often involve people migrating over large distances.'

The team used genome data for all 1490 individuals to identify 'chunks' of DNA that were shared between individuals from different populations. Populations sharing more ancestry share more chunks, and individual chunks give clues about the underlying ancestry along chromosomes.

'Each population has a particular genetic 'palette', said Dr Daniel Falush of the Max Planck Institute for Evolutionary Anthropology in Leipzig, co-senior author of the study.

'If you were to paint the genomes of people in modern-day Maya, for example, you would use a mixed palette with colours from Spanish-like, West African and Native American DNA. This mix dates back to around 1670CE, consistent with historical accounts describing Spanish and West African people entering the Americas around that time. Though we can't directly sample DNA from the groups that mixed in the past, we can capture much of the DNA of these original groups as persisting, within a mixed palette of modern-day groups. This is a very exciting development.'

As well as providing fresh insights into historical events, the new research might have implications for how DNA impacts health and disease in different populations.

'Understanding well the genetic similarities and differences between human populations is key for public health,' said Dr Simon Myers. 'Some populations are more at risk of certain diseases than others, and drug efficacy is also known to vary significantly. Rare genetic mutations are particularly likely to show strong differences between populations, and understanding their role in our health is an area of intense current research efforts. We hope in future to include even more detailed sequencing, to spot these rare mutations and better understand their global spread. Our method should be even more powerful when applied to these future data sets, providing rich opportunities for future work.'