Rembrandt, the Rembrandt, was not very good – at least not initially. Among a new and much-anticipated exhibition of his early works at the Ashmolean in Oxford are some pretty poor examples, according to the museum’s experts. But dogged determination saw Rembrandt develop from an, apparently, untalented amateur, who was his own muse, into an Old Master, courted by aristocratic patrons, and able to make paint do what he wanted.

It should be an inspiration to us all, according to An Van Camp, the curator of the exhibition, which looks certain to become the Ashmolean’s latest sell-out show, telling, as it does, the story of genius and hard graft.

But there will be no demands for refunds because the new exhibition is intended to show the artist’s development and painstaking attention to his art. In ten years, Rembrandt went from an uncertain 18-year old, with little apparent talent, to an artist whose works show the detail and mastery for which he is internationally known. He went from drawing himself to drawing himself, self-portraits are a particular favourite. But the difference in skills over this decade is remarkable.

‘This is not a matter of gradual and even development,’ said Professor Brown, describing Rembrandt’s progress as a ‘struggle’. He said the artist found the artistic process difficult and demanding. ‘He worked very hard,’ maintained Professor Brown, emphasising that Rembrandt was no child or even teenage prodigy.

In these 10 years he makes rapid progress. It’s very interesting to see how he struggled. He was very hard-working and he is an example of [what you can achieve with] persistence

From the very beginning, said Ms Van Camp, the museum’s curator of North European art, Rembrandt was full of creative ideas, even if some of the execution was ‘cartoonish’. And it is possible to see the artist’s early interests develop and continue into his later works, along with his fascination with drama and action. Rembrandt, the ninth of ten children, was always interested in older people and some of his earliest works are of his parents, who must have been in their 40s when he was born. 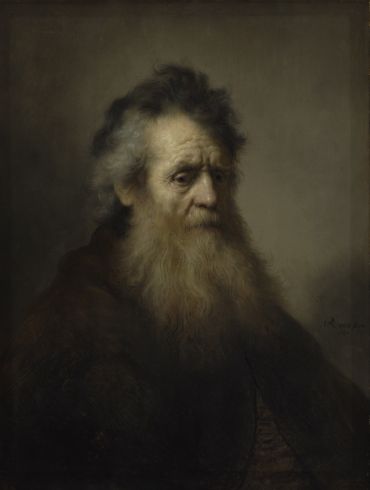 Portrait of an Old Man, Rembrandt c 1632
‘He was fascinated by old age,’ said Ms Van Camp. Along with the hard-work he put in during these apprenticeship’ years, this curiosity bears fruit in his later and better-known pieces.  It is the ability to detect and follow such interests and even facial expressions from early and unformed works into the accomplished works that makes the exhibition so compelling. Some of Rembrandt’s earliest sketches are of him pulling faces. But these grotesque expressions of surprise and scorn – along with his face - emerge again and again in subsequent years. And they are a stark contrast to later portraits, when he presents himself as a respectable, sombre and affluent artist.

Aside from older people, another feature of Rembrandt’s work from his early days, is his interest in low-born subjects. At a time when most paintings were of wealthy subjects, Rembrandt returned again and again to draw peasants and ‘washerwomen’.  The exhibition shows Rembrandt’s characteristic illumination and attention to detail begin to feature, with some early works showing that he was ‘half way there’, according to Ms Van Camp.

Several of the paintings have never before been on public display in the UK. Many come from overseas, especially from Leiden’s Museum de Lakenal. Together they weave a fascinating insight into the progress of the painter, showing how a Old Master can develop and emerge from unpromising beginnings.

The Young Rembrandt exhibition is at the Ashmolean Museum from 27 February to 7 June. Full price tickets, including gift, are from £15. Under 12s, Oxford University students and members are free. Concessionary rates are available.