A new study led by Oxford University researchers has demonstrated how hunting hawks solve the problem of intercepting a single bat within a dense swarm. The findings increase our understanding of how predators select and track a single target among thousands of potential prey.

The research was undertaken by Dr Caroline Brighton, a post-doc with the Oxford Flight Group in the Department of Biology at Oxford University, alongside colleagues from the University of New Hampshire. The researchers observed Swainson’s Hawks (Buteo swainsoni) and other raptors hunting a colony of approximately 700,000 to 900,000 Mexican free-tailed bats (Tadarida brasiliensis) as the bats emerged from a cave each evening. By using an array of cameras, they were able to reconstruct the 3D flight trajectories of the raptors and bats, which they analysed computationally.

It is generally thought that being in a large group — such as a swarm of bats, a flock of birds, or a school of fish — provides protection from predators. One way in which this protection could arise is through a ‘confusion effect’: the presence of many potential targets may confuse predators, making it more difficult for them to focus on and capture a specific individual. If predators get confused, then they should become less successful at catching prey as the prey’s group size increases. However, empirical evidence for a confusion effect has been mixed.

To understand more about the confusion effect, the researchers headed to a remote study site in the Chihuahuan Desert in New Mexico, USA. The site is located on a vast volcanic plateau approximately 1500m above sea level, where the remains of lava tubes form deep caves which the bats use as a day roost during their breeding season. The bats stream out at dusk in a continuous ribbon to fly to their feeding grounds. The predictability and regularity of their behaviours make them an excellent study system.

By pairing two cameras in stereo, Dr Brighton and colleagues filmed hawks hunting the bats as they emerged at dusk. They then reconstructed the hawks’ flight paths in 3D and compared the trajectories of the real birds with the trajectories modelled by a computer algorithm.

The researchers found that, instead of continuously targeting an individual bat, the hawks would steer towards a fixed point within the swarm. This still raised the question of how the hawks selected which targets to grab. However, as any bat on a collision course with the hawk would appear to remain on a constant bearing, the hawks may use this to single out a target bat from the swarm. Dr Brighton explains:

‘From the viewpoint of a stationary observer – such as a person stood on the ground - all members of the swarm appear to move erratically. For a mobile observer – like the hunting hawks in flight - any bat that it is on a collision course with will appear stationary against the background movement of the swarm.’

The researchers suggest that this strategy of targeting a fixed point in a group of prey may be a more general mechanism yet to be discovered in other predators. However, they indicate it may only be effective when groups of prey are sufficiently dense.

‘Our work shows how the appearance of a swarm depends on the predator’s own motion, so starling murmurations and many other group behaviours that look bewildering to our own eyes may not appear so confusing to a predator taking the plunge’ says senior author of the study Graham Taylor, a Professor of Mathematical Biology at the Oxford Flight Group. ‘The same will hold true for other agents using visual targeting of swarms, including drones and other autonomous vehicles.’ 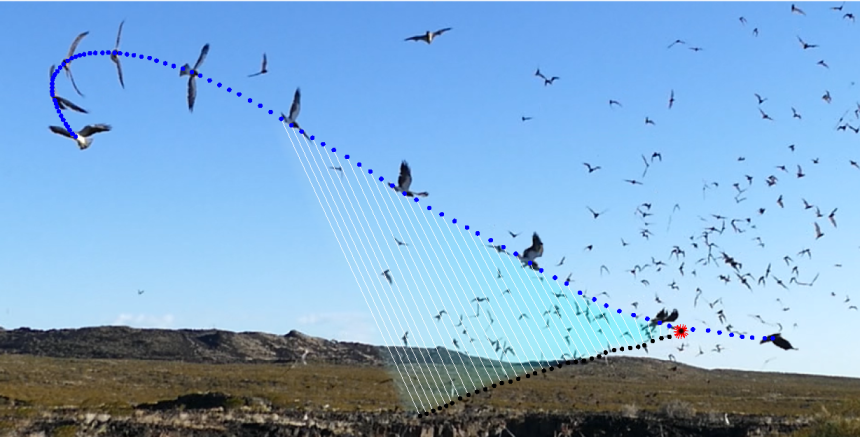 The study results demonstrate that Swainson's Hawks target a fixed point in the swarm when attacking, rather than any single bat. Image credit: Dr Caroline Brighton (2022).