Underneath the giant Amazonian waterlily

Researchers studying giant Amazonian waterlilies grown at the University's Botanic Garden have unravelled the engineering enigma behind the largest floating leaves in nature.

In a study published recently in Science Advances, researchers found that the distinctive pattern on the underside of the gargantuan leaves is the secret to the success of the giant Amazonian waterlily (genus Victoria).

The criss-cross framework makes up the vascular structure of the lily pad (or leaf), supporting its large surface area and keeping it afloat. The giant leaves can grow 40cm a day, reaching nearly 3m in diameter – ten times larger than any other species of waterlily – and carry the weight of a small child. 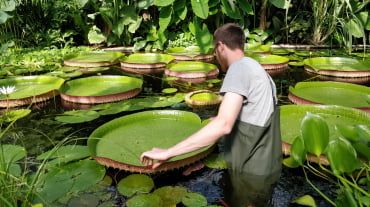 'I used to marvel at this extraordinary plant on childhood trips to botanic gardens. I remember wondering how on earth does it grow this big.'

'Their strength allows giant Amazonian waterlily leaves to occupy a huge surface for light capture despite their low biomass relative to other waterlilies. That's the secret to their success,' said Dr Thorogood. 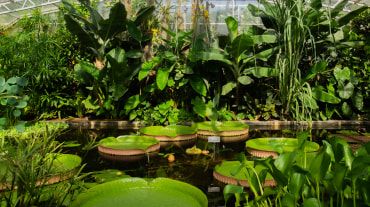 'Leaf size is usually restricted mechanically by the expense of maintenance. A larger surface area for photosynthesis uses more of the plant's energy to maintain. The structure and load-bearing properties of the giant Amazonian waterlily give it a competitive edge: high strength at low cost.'

Away from the glasshouse pond and back in its natural habitat – the quick-drying ephemeral pools of the Amazon basin – the giant Amazonian waterlily evolved with an advantage in the race among plants for space and light.

Its giant leaves unfold quickly and cheaply, jostling for position on the surface of the water, to create a mosaic of lily pads that block the light to any plants beneath.

The leaf's flexible framework can withstand elastic deformation to avoid damage from wading birds. Small holes on the surface drain trapped rainwater. Spikes on the undercarriage of the leaf push other plants out of the way as the leaf unfolds and defend against nibbling fish.

'The leaves are truly multi-purpose,' said Dr Thorogood. 'The plants are well adapted to the challenges of their habitat'.

Despite captivating artists, architects, and Green Planet audiences alike, until now, little was known about the secret behind the size and strength of the floating giants.

'Remarkable structures in nature can help us to unlock design challenges in engineering. The form of these waterlilies could inspire giant floating platforms, such as solar panels in the ocean. There's a lot we can learn from leaves,' concluded Dr Thorogood.