His Royal Highness The Prince of Wales enjoyed a busy time in Oxford on Tuesday 8 June with visits to the Oxford Botanic Garden and to Somerville College. Image credit: John Cairns
Published

His Royal Highness The Prince of Wales enjoyed a busy time in Oxford on Tuesday 8 June with visits to the Oxford Botanic Garden and to Somerville College.

His Royal Highness toured the Botanic Garden to mark its 400th anniversary, making it the oldest botanic garden in the UK. He saw its most notable attractions, including the historic Walled Garden, the historic Whitty Pear, Bobart’s Yew, and the Mediterranean Rock Garden.

His Royal Highness then planted a tree, which has been grown from a seed of an original black pine planted in the 1830s and much loved by JRR Tolkien, which split in two in 2014.

During a tour of the Walled Garden His Royal Highness was introduced to the Botanic Garden’s longest serving horticulturalists, Mrs Claire Kelly (34 years of service) and Mr Richard East (30 years of service).

At the Conservatory he met Dr Christopher Thorogood, Deputy Director and Head of Science, and viewed two special plants from the Glasshouse collections relevant to the Botanic Garden’s strategic priorities of research, teaching, conservation and public engagement.

Professor Louise Richardson, Vice-Chancellor of the University of Oxford, said: ‘We were delighted to welcome the Prince of Wales to Oxford once again, especially on the 400th anniversary of the Botanic Garden, a much-loved Oxford institution that is as much a part of the heritage of the city and the country as of the University.

‘The enduring success of the Botanic Garden as a place of teaching and research is a testimony to its curators and gardeners, including the team met by the Prince of Wales, who are continuing the Garden’s history of updating and adapting to scientific discovery over the centuries.’

Professor Simon Hiscock, Director of the Oxford Botanic Garden & Arboretum, said: ‘It was an honour to welcome our Patron The Prince of Wales in our 400th year and to have the opportunity to share the important work we do at the Botanic Garden in our strategic mission of ‘sharing the scientific wonder and importance of plants with the world’. The visit acknowledges the important role played by institutions like the Botanic Garden in research, education, conservation and public engagement. Just as we were established as the Oxford Physic Garden for growing medicinal plants used to teach medical students, we now teach and research plant biology in diverse ways, whilst communicating to everyone - students and the public alike - why plants matter and why they are essential to the sustainability of our planet and its biodiversity and ultimately to our own survival as a species.’ 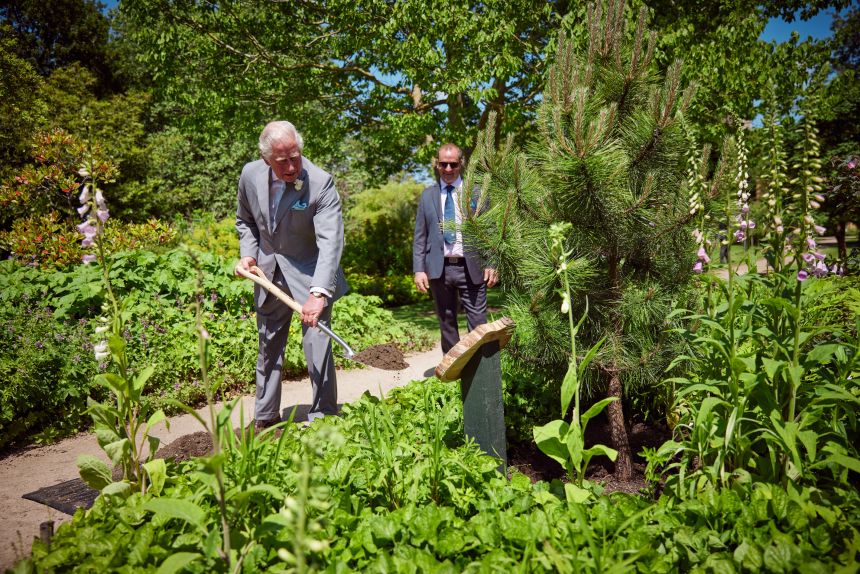 During his visit to Oxford, His Royal Highness The Prince of Wales, toured the Botanic Garden to mark its 400th anniversary. His experience included planting a tree, which has been grown from a seed of an original black pine planted in the 1830s, which split in two in 2014.

The Prince of Wales’ earlier engagement in the day was at Somerville College, where climate change, women’s rights and Oxford’s partnership with India were all on the agenda during the first public visit by a senior member of The Royal Family to an Oxford college since the beginning of the coronavirus pandemic.

Founded in 1879, Somerville was one of the first colleges for women at the university, but it was not until 1920 that women students were permitted to graduate with full degrees. His Royal Highness met social historian and author Dr Jane Robinson, and the college’s Librarian, Dr Anne Manuel, during his visit, to hear about the role of Somerville College and its members in campaigning for the rights of women at Oxford.

The Prince met scholars from the Oxford India Centre for Sustainable Development over tea, along with its Research Director, Associate Professor Radhika Khosla. They discussed the work of the ground-breaking Oxford-India partnership to advance knowledge of the complex challenges and opportunities associated with sustainable development in India. In the college grounds, Prince Charles met members of Somerville College’s Sustainability Working Group, which brings together a diverse body of students, academics and support staff to secure the College’s sustainability goals. Associate Professor Michelle Jackson, an ecologist who serves as Chair of the group and whose research examines the impact of climate change on marine and freshwater ecosystems, outlined some key items in Somerville’s new sustainability plan.

His Royal Highness concluded his college visit by planting a Rehderodendron macrocarpum tree in the college’s Darbishire Quadrangle. The small tree, which originally comes from China, blossoms in May and will provide an early source of nectar and pollen for insects as well as a floral display for Somerville’s students to enjoy during the summer term.