Jesus College and Kellogg College both welcomed a Royal visitor this week.

His Royal Highness The Prince of Wales enjoyed a busy time in Oxford on Thursday 5 March with visits to two colleges in one afternoon.

His first engagement was at Jesus College to mark the appointment of their new Jesus Chair of Celtic and to learn about their student access initiatives in Wales.

It was then time to head to Kellogg College where he formally received the Bynum Tudor Fellowship and met with members of the new Global Centre on Healthcare and Urbanisation.

At Jesus College, the Prince was welcomed by Principal, Sir Nigel Shadbolt, and Lord Patten, Chancellor of the University of Oxford.

He was also greeted by 60 primary school children from three Welsh schools which form part of the College’s Welsh Access Programme, all holding bunches of daffodils, and chatted to students, Fellows and staff.

Jesus College was founded in 1571 by Queen Elizabeth I at the request of a Welsh lawyer and clergyman, Hugh Price, and is known as ‘the Welsh college’. It continues to maintain strong links with Wales today and its Welsh Access Programme reaches out to young people in underserved communities across the country to encourage them to think about applying to Oxford.

Principal Nigel Shadbolt said: “It is a huge privilege to welcome back His Royal Highness to Jesus College to join us in marking the appointment of our new Chair of Celtic and our schools access programmes in Wales.

“His support for Wales and the people of Wales reflects our own passion for creating a College community that celebrates Welsh culture through its research, activities and people. We also share his values around sustainability and the environment, which echo the views and concerns of our Fellows and students.”

In the Hall, His Royal Highness met a group of College alumni and members, including Dr David Willis the newly-appointed Jesus Chair of Celtic.

The Jesus Chair of Celtic has been entrusted to support the scholarship and preservation of Celtic languages, literature and history at the University of Oxford since 1877 and is the only Professorship in Celtic at an English University. Dr Willis’ appointment comes following an eight-year hiatus and a £3.25m fundraising campaign to permanently safeguard the role. 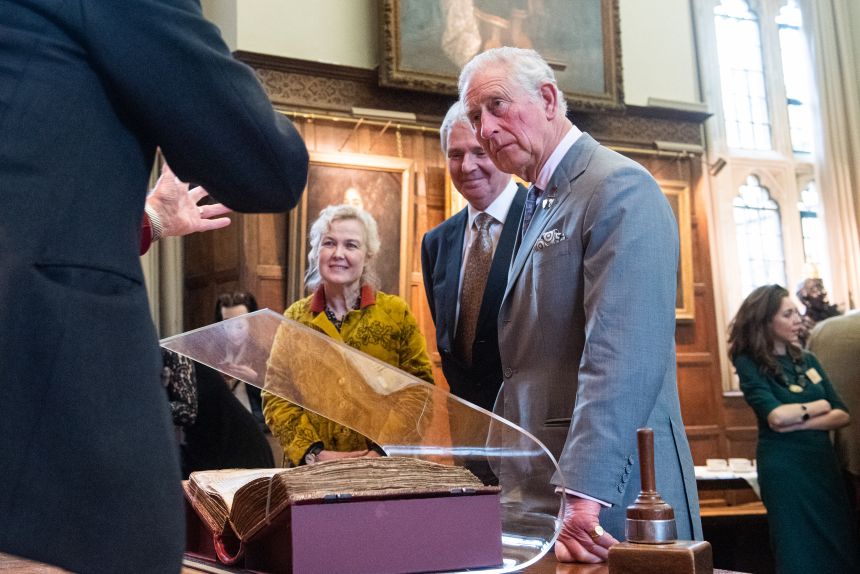 While in Hall at Jesus College, His Royal Highness viewed the Red Book of Hergest, which is owned by College and kept at the Bodleian Library. Image by John Cairns

While in Hall, His Royal Highness enjoyed a recital of the Gweddi Coleg Iesu, a Welsh Prayer sung by members of the student consort choir directed by Peter Parshall, Chapel Music Coordinator. He viewed the Red Book of Hergest, which is owned by College and kept at the Bodleian Library. The book, one of the most important written in Welsh, is a compilation of chronicles, mythology, romances and court poetry.

College Librarian Owen McKnight, who had the honour of showing His Royal Highness the book alongside Thomas Charles Edwards, Emeritus Professor of Celtic, said: “The Red Book of Hergest was written shortly after 1382 and is one of the most important medieval manuscripts written in the Welsh language. The Prince was shown a page that details the herbal remedies of the legendary Physicians of Myddfai.”

There was also a private reception in the Principals Lodging where the Prince met Jesus College alumnus and supporter Oliver Thomas and his family. Mr Thomas, a managing partner at Grafton Capital which he founded in 2014, recently donated £1m to support the flagship Welsh Access Summer School, a collaboration with the Welsh government’s Seren Network.

It was then time to move on to Kellogg College, where the Prince formally received the Bynum Tudor Fellowship in recognition of his championing of sustainability and community in approaches to urban development over the last 30 years.

The Prince also used his visit to see the College’s new Global Centre on Healthcare and Urbanisation.

In front of a gathering of Kellogg students, academics, and alumni of the University of Oxford’s graduate programmes in Sustainable Urban Development and Evidence Based Healthcare, The Prince praised the work of a new Centre which is focusing on links between urbanisation and its impact on the health and wellbeing of communities around the world.

His Royal Highness said: ‘’I could not be more delighted with the formation of the new Global Centre on Healthcare and Urbanisation - a partnership between Kellogg College and my Foundation.

“The impact of urbanisation on human health, on wellbeing and prosperity are so clear that it is surprising, to say the least, that very little research seems to exist in this area.

“The Centre’s potential though for convening and coordinating evidence-based research that makes the connections between urban form and human health could not, therefore, be more timely and critical.’’ 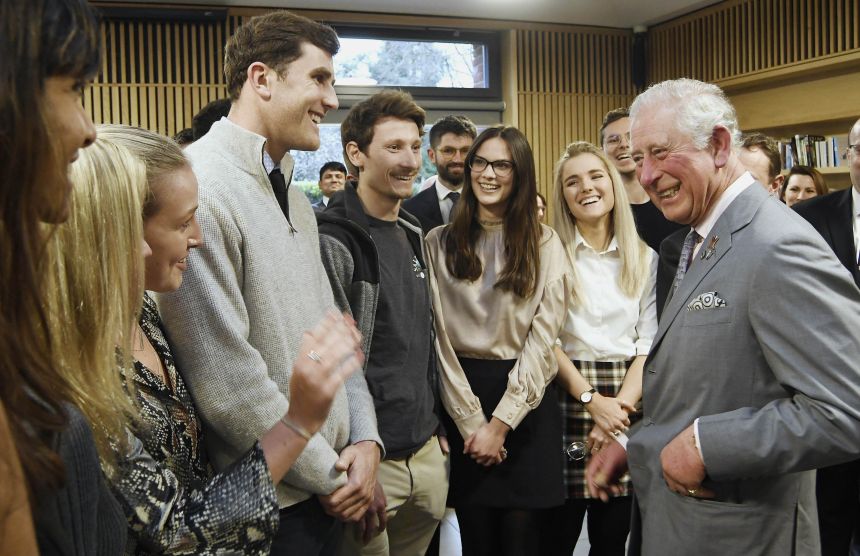 HRH The Prince of Wales was greeted by students, academics, and alumni at Kellogg College

HRH The Prince of Wales was greeted by students, academics, and alumni at Kellogg College

The Prince previously visited Kellogg three years ago, just after the opening of the Hub – the University’s first building constructed to Passivhaus standards of sustainability.

Welcoming his return visit The President of Kellogg College, Professor Jonathan Michie, said: ‘’Each year Kellogg appoints one additional Bynum Tudor Fellow. We are absolutely delighted this year to be honouring, because of his tireless work promoting sustainability and wellbeing, His Royal Highness, the Prince of Wales.’’

Simon Sadinsky, deputy executive director of The Prince’s Foundation, added that the work of the Global Centre could not come at a more critical time. He said: “There is a growing realisation that where you live is just as important to your health as diet and exercise. Urban development is therefore key to realising the potential for towns and cities to be health-generating places.

“The work at the centre is going to be crucial in understanding how these two disciplines are interlinked in the daily lives of millions of people.”

Professor Carl Heneghan, co-director of the Global Centre of Healthcare and Urbanisation, added: “Never has it been so important to understand the link between our surroundings and our health. We are witnessing the most dramatic of convergences between environmental, economic and social global crises to create a perfect storm. An increasing proportion of the world’s population are becoming city dwellers, likely to reach 70 per cent by 2050 – that’s 2.5 billion more people living in urban areas than today.’’