A team of scientists from the Universities of Oxford, Cornell and San Jose State, collaborating across theoretical and experimental physics and computer science, have developed and trained a new machine learning (ML) technique, to finally understand how electrons behave in important quantum materials. Their far-reaching results are published in Nature.

For the last 100 years materials such as gold and silicon have been conduits to the force which has powered civilisation: electronics. And in all such conventional materials the behaviour of electrons is simple: they largely ignore each other.

However, future electronics designed for quantum technologies requires development of new quantum materials. In quantum materials, e.g. high temperature superconductors, electrons interact so strongly and behave so strangely that, until now, they have defied explanation.

But now, scientists have made a significant breakthrough in both technique and understanding. Based on a suite of 80 artificial neural networks (ANN) that they had designed and trained to recognise different forms of electronic matter, machine learning has discovered a new state called a Vestigial Nematic State (VNS).

Lead author, Prof. JC Séamus Davis, of University of Oxford, said: ‘I have focused on visualisation of electrons at atomic level. Twenty years ago we developed a microscope that could see directly where all electrons are in the quantum materials, and how the function.

‘In this new collaboration with Professors Eun-Ah Kim (Cornell) and E. Kathami (San Jose State) , we fed an electronic image archive gathered over about 20 years – 1000s of electronic structure images – into these artificial neural networks. To my amazement it actually worked! The Vestigial Nematic State had been predicted by theorists but there was no experimental evidence. It was thrilling to see how the new machine learning technique discovered it hiding in plain sight. ’

It is a milestone for general scientific technique as it demonstrates how machine learning techniques can process and identify specific symmetries of highly complex image-arrays from electronic quantum matter data.

By fusing machine learning with quantum matter visualisation the scientists believe that it will accelerate quantum material advances, especially in the area of high temperature superconductivity, in the quest for room temperature quantum computers. 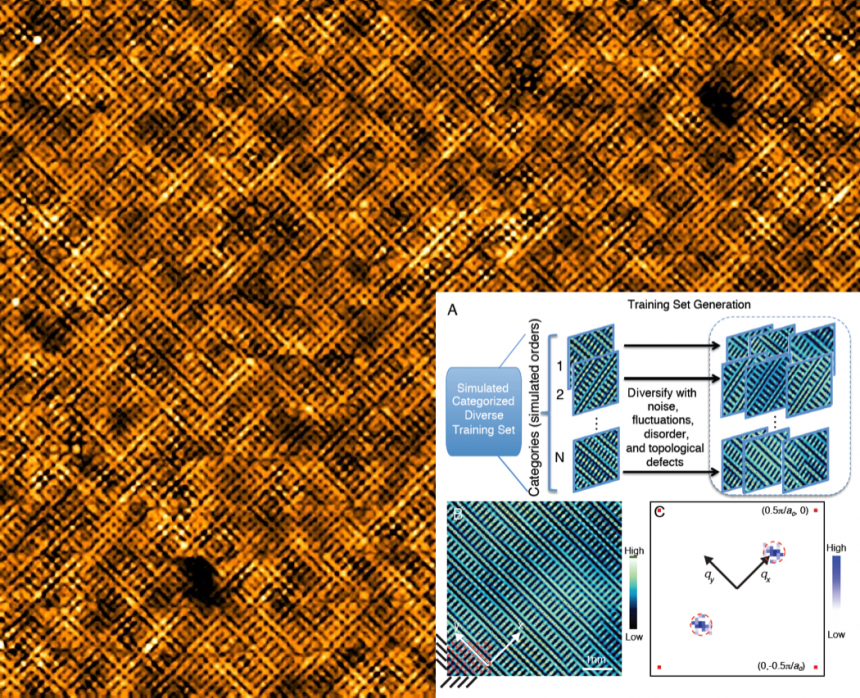 Background: experiment image of electron density from one of the microscopes

Inset: architecture of ANN that was trained to "look at" such images and report back what states of electronic matter are hidden therein

Find out more from the Department of Physics, University of Oxford.