An unprecedented study of rabbit DNA spanning 150 years and thousands of miles has revealed the genetic basis for the animal’s fightback - and ultimate triumph, against the deadly myxoma virus. Image credit: Stuart Gillespie
Published

An unprecedented study of rabbit DNA spanning 150 years and thousands of miles has revealed the genetic basis for the animal’s fightback - and ultimate triumph - against the deadly myxoma virus.

The revelation of how rabbits evolved genetic resistance to myxomatosis through natural selection, comes as part of an international research collaboration, nearly seventy years after the lethal disease decimated species’ populations of Australia, Britain and France.

Using the latest technology, the team led by the University of Cambridge and CIBIO Institute in Porto, and including researchers at Oxford University, extracted DNA from nearly 200 rabbits dating from 1865–2013, including one owned by Charles Darwin. The scientists then sequenced nearly 20,000 genes to pinpoint mutations that have emerged since the myxomatosis pandemics of the 1950s.

The study, published in the journal Science, reveals that modern rabbits in Australia, the UK and France have acquired resistance to myxomatosis through the same genetic evolution. The team also found that this resistance relies on the cumulative impact of multiple mutations of different genes.

Lead author, Joel Alves a postdoctoral research assistant at Oxford’s School of Archaeology, said: ‘We compared rabbits collected before the virus outbreak in the 1950s with modern populations that evolved resistance, and found that the same genes had changed in all three countries. Many of these genes play a key role in the rabbit immune system. Often evolution works through big changes in single genes, but our findings show that resistance to myxomatosis likely evolved through lots of small effects spread across the genome.’

Three particularly significant mutations were discovered in the IFN-alpha 21A gene which sets off a protein-based alarm in rabbit cells when a virus is detected. In the lab, the team produced the form of the protein found in rabbits in the 1950s and the different form found today. Senior author Professor Francis Jiggins from Cambridge’s Department of Genetics said: ‘We sent these proteins into battle with different strains of the virus and that’s when we saw, on a molecular level, how rabbits have been fighting back over all these years.’

Australia unleashed myxomatosis on an out-of-control rabbit population in 1950. The European rabbit is thought to have been introduced to the country by Thomas Austin, an English settler, in the 1850s. Within a century, they numbered hundreds of millions. The species wreaked havoc on Australia’s native plants and animals but in less than three months, myxomatosis had spread 2,000 km and killed 99 per cent of infected animals. In 1952, the virus was illegally introduced in France and in 1953 it reached the UK, leading to similarly devastating results in both countries.

Scientists soon began tracking the evolution of both the virus and the rabbits, and in all three countries, they observed a substantial drop in fatality rates. They concluded that this was due to the disease becoming less virulent but also rabbits becoming more resistant. Animal populations exhibit considerable genetic variation in susceptibility to infection which allows for rapid evolution of resistance when exposed to new diseases. The pandemics of the 1950s triggered a particularly intense process of natural selection. Those initial findings have become a textbook example of host-parasite coevolution but this new study offers a far more detailed picture of what has been happening in rabbits. 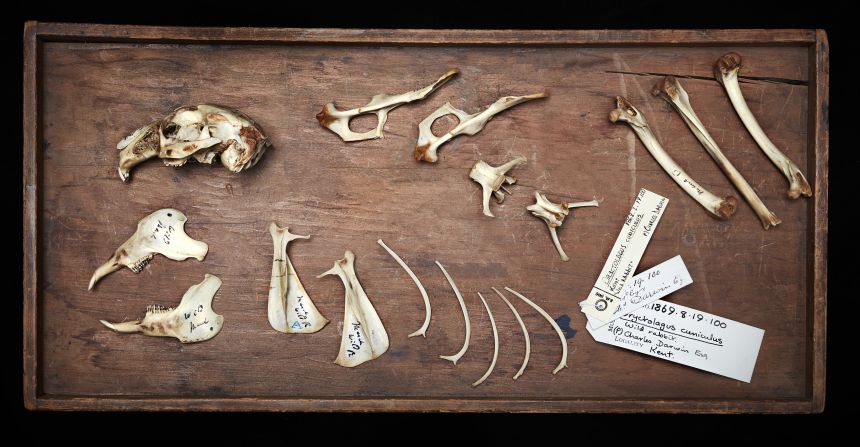 The team collected historical samples from 11 natural history museums in the UK, France, Australia and the United States. One of the rabbits from which DNA was sequenced belonged to Charles Darwin and is now housed in London’s Natural History Museum. Joel Alves said: ‘It wasn’t easy to get samples from so many long-dead rabbits. Not all natural history museums keep rabbits because they are not very exotic compared to other species. But the museums we worked with have done a great job of keeping their specimens well preserved for decades. This and the availability of new technology gave us a unique opportunity.’

At a time when rabbit populations are collapsing across the UK and mainland Europe, the study may also provide clues to the animal’s future. The findings revealed that the protein that helps rabbits fend off the myxoma virus also has an antiviral effect on an unrelated virus called vesicular stomatitis. Miguel Carneiro, from CIBIO, University of Porto, said: ‘While battling myxoma, rabbits may have increased their resistance to other viruses including, perhaps, rabbit haemorrhagic disease which is killing so many animals right now.’

Myxoma remains a serious threat to rabbits today, Joel Alves said: ‘Viral evolution appears to be finding ways to counter the genetic adaptations which we’ve observed. Recent, more virulent recent strains of myxoma virus, have been found to be extremely immunosuppressive. So the arms race goes on.’