An Oxford suffrage flag is flying across the city today (Friday 14 December) to mark 100 years since the first general election in which British and Irish women were able to vote.

A host of Oxford University colleges and departments, as well as local schools, are flying the flag as part of an ongoing initiative to commemorate the centenary of women’s suffrage.

The 1918 general election was the first to be held following the Representation of the People Act, which gave women over 30, and all men over the age of 21, the right to vote.

Other high-profile events held during the course of 2018 have included the Sappho to Suffrage: Women who Dared exhibition at the Weston Library, which featured the only surviving copy of an Edwardian board game titled ‘Suffragetto’.

The initiative forms part of the Women in Humanities project at Oxford University, which aims to support women researchers in the humanities and advance gender equality. 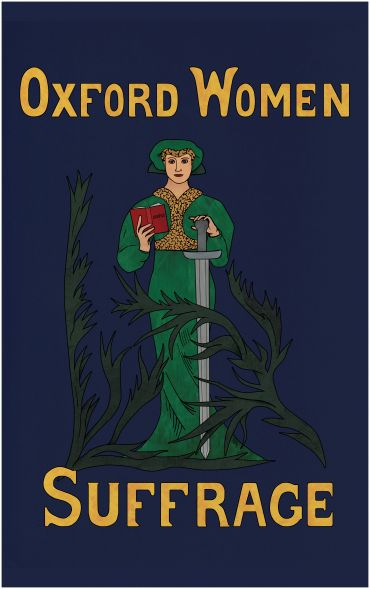 Professor Senia Paseta, of Oxford University’s Faculty of History and Co-Director of Women in Humanities, said: ‘The history of suffrage, and women’s history in general, are really vibrant areas of research at Oxford University, and it has been a pleasure to see this reflected in the high-profile events held throughout 2018 to mark 100 years since women won the vote. Oxford itself has a rich history in the campaign for women’s suffrage, beginning in the late 19th century and gaining real momentum with the foundation of the Oxford Women’s Suffrage Society in 1904.

‘The distinctive Oxford suffrage flag has been recreated to mark the anniversary and will be visible across the city skyline today. We hope that people will look out for it and remember those who campaigned tirelessly more than a century ago for women’s citizenship rights.’

The Oxford suffrage flag – depicting the city’s patron saint, St Frideswide – was produced by a local women’s suffrage group in 1908 and has been recreated for the centenary based on a pencil sketch that featured in the Oxford Times.

Among Oxford’s most prominent women’s suffrage campaigners was Emily Wilding Davison, who achieved first-class honours in English in the Oxford University exam for women but was unable to graduate as Oxford degrees were closed to women at that time. She is best known today for the manner of her death at the Epsom Derby in 1913, where she was fatally injured by the King’s horse.