Some of the world’s biggest private sector companies are making a stronger commitment to addressing their environmental impacts, according to new research.

Some of the world’s biggest private sector companies are committing to address their environmental impacts and factoring biodiversity into their sustainability reports, according to new Oxford University research.

The perhaps surprising observation, comes as part of a new study conducted by researchers in Oxford’s Department of Zoology, in collaboration with the Durrell Institute of Conservation and Ecology (DICE) at the University of Kent, which assessed the top 100 of the 2016 Fortune 500 Global companies' (the Fortune 100) sustainability reports, for the first time, including, Sainsbury’s, Walmart and Apple.

The findings published in Conservation Biology, sit as a direct contrast to UN experts previous description of big business as ‘soulless corporations and a cancer on society,’ and suggest that the private sector is taking note of the public’s growing concerns around corporate responsibility for environmental issues, like plastics, marine pollution and deforestation.

The study is the first of its kind, and offers a global snapshot of some of the biggest corporations around the world, across multiple sectors of large businesses, that publicly disclose their impacts and dependencies on biodiversity. Understanding these varying levels of commitment will allow the team and others in the field to better work with these businesses to shape their biodiversity goals, help them be more effective in managing their impacts, and ultimately better protect the environment.

Of the top Fortune 100 companies, 86 have publicly available sustainability reports. A review of this data revealed that almost half (49) of the Fortune 100 companies mentioned biodiversity in their reports and 31 made clear biodiversity commitments and an additional 12 made clear fishing or forestry commitments. However, only five of these companies made biodiversity commitments that could be considered specific, measurable and time-bound. This is unlike the much greater adoption of science-based climate commitments made by companies committing to reduce carbon emissions in line with the Paris Agreement within the next decade, emphasising that biodiversity loss remains a less pressing issue to the private sector compared to climate change.

Prue Addison, NERC Knowledge Exchange & Research Fellow at the Interdisciplinary Centre for Conservation Science in Oxford’s Department of Zoology, explains: ‘Biodiversity underpins the resilience of ecosystems, economies and societies. Many businesses can be reliant on biodiversity, such as those in natural resource sectors. But many other sectors will find that biodiversity is relevant to business operations too – particularly since regulators, financial institutions and society are increasingly demanding responsible corporate practice when it comes to managing biodiversity impacts. Biodiversity is a critical aspect of the living environment that should be considered across public and private sectors, if we are to halt the biodiversity declines that have been witnessed around the globe over recent decades. 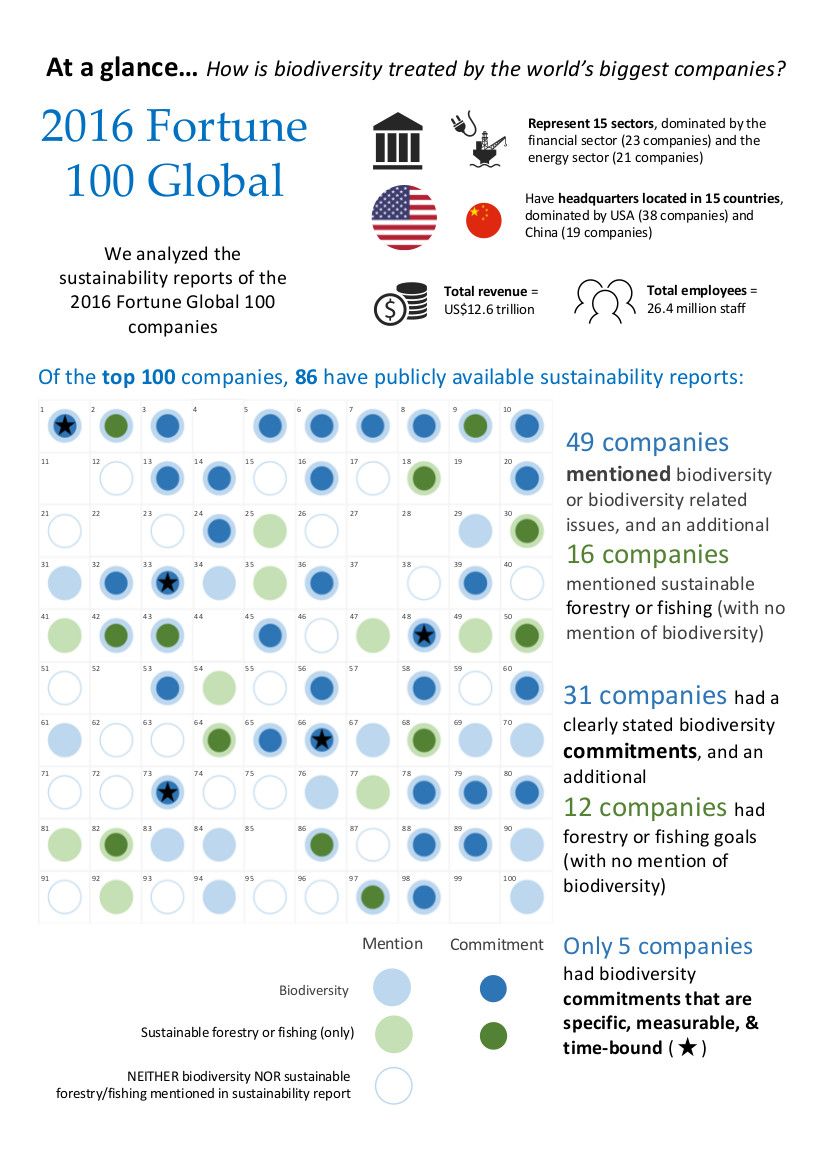 Professor E.J. Milner-Gulland, the paper’s co-author, who leads the Interdisciplinary Centre for Conservation Science in Oxford’s Department of Zoology, explains: ‘It is important for us as conservation scientists to understand to what degree larger corporations depend on biodiversity, so that we can begin to work more closely with the private sector to help them develop fit-for-purpose and science-based approaches to better integrate biodiversity considerations into future business decisions.’

In recent years environmental awareness has become a hot-topic social issue, with people petitioning brands to do more in the way of environmental protection, such as banning single-use plastic, through to slowing the rate of global deforestation.

Of how better understanding this data can support conservationists in their work, Dr Addison said: ‘This study represents just the beginning of our applied research into corporate biodiversity accountability.

Now that we understand how businesses currently treat biodiversity in their public reporting, we can work in a more targeted way with businesses to help them more rapidly advance their corporate biodiversity accountability. Some critical areas we are already beginning to work with business on include developing science-based corporate biodiversity commitments, and robust and relevant quantitative biodiversity indicators. We also recognise the power that the Sustainable Development Goals hold for many businesses, so we are working to show how being accountable for biodiversity can help businesses demonstrate their commitment to international conservation and sustainable development priorities outlined in the SDGs.’

Moving forward the team are keen to build on these findings, by building relationships with big businesses, and helping them develop clear biodiversity aspirations, and take action to address and drive their goals towards making positive environmental change.

Prue explains: ‘We have had a lot of interest in our research already – particularly from organisations that aim to support businesses in their non-financial reporting and accounting. For example, we have been speaking with the IBAT (Integrated Biodiversity Assessment Tool) Alliance, who are very excited about our research. They are increasingly getting requests from businesses to develop a tool that will support them in undertaking corporate-level reporting on biodiversity. As yet, no such tool exists, we hope that our research could form the underpinning for a prototype tool in the coming year to support businesses with their corporate-level reporting on biodiversity.’