A microscopy image showing the cellular organisation and exceptional preservation of a meristem of A. mackiei.

Despite plants and vegetation being key to the Earth’s ecosystem, little is known about the origin of their roots. However in new research, published in Nature, Oxford University scientists describe a transitional root fossil, from the earliest land ecosystem, that sheds light on how roots have evolved.

The findings suggest that plant roots have evolved more than once, and that the characteristics of roots developed in a step-wise manner - with the central root organ evolving first. And the root cap subsequently coming later.

Dr Hetherington said: ‘The level of preservation in the Rhynie chert is truly remarkable – it never ceases to amaze me that I am able to examine the cellular organisation of plants that were growing 407 million years ago. It provides an exceptional window into life on the terrestrial surface at that time.’

The defining feature of modern-day plant roots is the meristem — a self-renewing structure that is covered by a cap at its apex. Root meristems are hard to spot in the fragmentary fossil record, which can make it challenging to unearth the evolutionary origin of roots.

The authors found evidence of root meristems belonging to the lycopsid plant Asteroxylon mackiei. Lycopsids – commonly known as club mosses, are vascular plants (those with tissues that internally move resources) whose lineage branched off early, before the other higher plants (the euphyllophytes).

The team were able to build a 3D reconstruction of the fossil meristem, and from their analysis find that the meristems of A. mackiei lack both root hairs and caps — they are covered instead by a continuous layer of surface tissue. This structure makes these roots unique among the vascular plants. 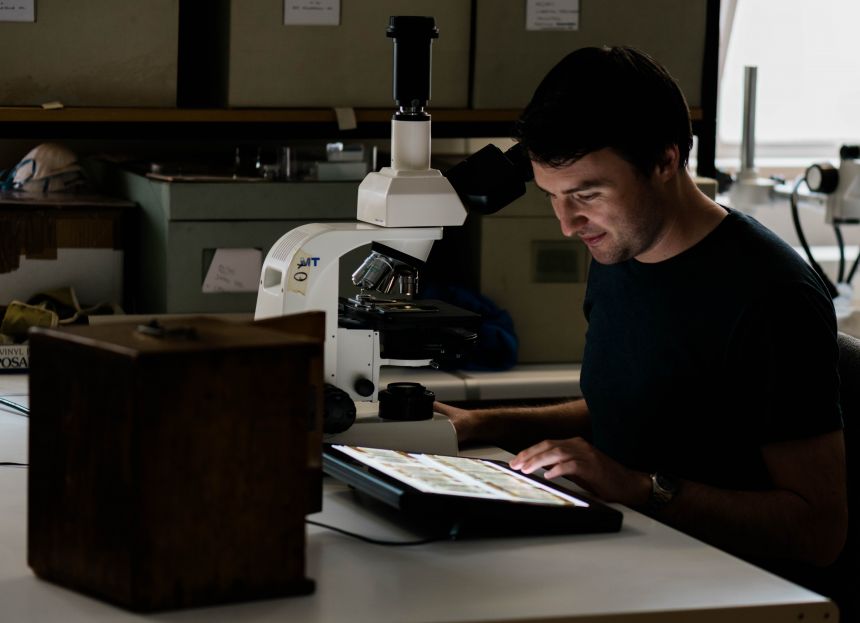 The paper’s conclusion suggests that these roots are a transitional step towards modern-style, rooted vascular plants. The findings support the idea that, as this cap-less transitional structure appears in a plant that is already a lycopsid, roots with caps evolved separately in lycopsids and euphyllophytes from their common, root-less ancestors.

Discussing plans to expand on this work, Professor Dolan said: ‘Our discovery suggests that plant organs were built up step-by-step during the course of plant evolution.

‘The evolution of roots was a critical time in Earth’s history and resulted in a dramatic reduction of atmospheric carbon. Now that we know that roots evolved in a step by step manner, we can go back to ancient rocks looking for structures that are missing “parts” that are present in extant roots.

‘I really want to find out where root caps came from. They seemed to have appeared out of thin air. They are very important in extant roots; the root cap is important to protect the root as it pushes through the soil and it is the site where roots detect gravity. How did these ancient roots manage without a cap to provide these functions?’