Oxford has extended warm congratulations to Alex Halliday FRS– Professor of Geochemistry and Vice President of the Royal Society – on his appointment as new Director of the Columbia Earth Institute.

'The work of Columbia’s Earth Institute, particularly on climate change and sustainable solutions across the globe, has never been more relevant or more urgent,” said Columbia President Lee C. Bollinger. “Alex Halliday is a renowned research scientist and skilful academic leader who is uniquely suited to charting the Institute’s future and its vital interdisciplinary role at the University.'

Professor Halliday served with distinction as the Head of the Division of Mathematical, Physical and Life Sciences at Oxford from 2007-2015. His successor in the role, Professor Donal Bradley CBE FRS, said: 'Alex Halliday is one of the outstanding scientists of his generation. He has made immense contributions both to the field of geochemistry and to the development of the mathematical, physical and life sciences in Oxford. Alex's colleagues throughout the research community here would wish to join me in offering our warmest congratulations on this new venture. We wish Alex continuing success at Columbia University, and look forward to working together over the coming years, sustaining a number of on-going research collaborations utilising Oxford research facilities.' 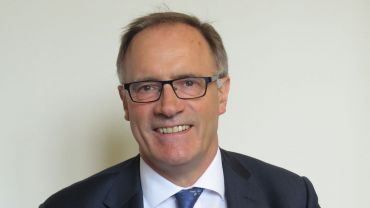 Oxford Geoscientist Alex Halliday FRS, Professor of Geochemistry and Vice President of the Royal Society, has been appointmented as new Director of the Columbia Earth Institute

In addition to AGU’s Harry Hess Medal, Alex Halliday’s honours include the European Association of Geochemistry (EAG)’s Urey Medal, the Institute of Measurement and Control’s Oxburgh Medal for technique development in environmental science and engineering, and the Geological Society of London’s Murchison Medal. He is a Foreign Associate of the U.S. National Academy of Sciences, a member of Academia Europaea, and a Fellow of the Royal Society, AGU, Meteoritical Society, Geochemical Society and the EAG. He has served as an editor or reviewing editor for several major journals, including Science and Earth and Planetary Sciences Letters.

He will start as a professor in Columbia’s Department of Earth and Environmental Sciences in Spring 2018, dividing his time between Columbia’s Morningside campus and Lamont-Doherty Earth Observatory, where he will establish his geochemistry lab.