The IceCube Laboratory at the Amundsen-Scott South Pole Station, in Antarctica, hosts the computers collecting raw data. Due to satellite bandwidth allocations, the first level of reconstruction and event filtering happens in near real-time in this lab. Only events selected as interesting for physics studies are sent to UW-Madison, where they are prepared for use by any member of the IceCube Collaboration.

Scientists working with the world’s largest particle detector, have for the first time demonstrated the Earth’s ability to stop highly energetic neutrino particles.

Neutrinos are high-energy subatomic particles that are formed from violent collisions like black holes. Discovered in 2015, they help researchers to study the universe indirectly and are renowned for their ability to pass through almost anything – even the Earth. About 100 trillion neutrinos pass through the human body every second.

In new research, published in Nature, an international group of researchers from institutions including the University of Oxford’s Department of Physics, spent a year studying neutrino interactions at the IceCube South Pole Observatory and collated the first evidence of the Earth’s ability to absorb them at high energies.

The IceCube ‘telescope’ is a kilometre-size chunk of the Antarctic icecap instrumented to search for cosmic neutrinos and estimate their directions and energies. Its sensors do not directly observe neutrinos, but instead measure flashes of blue light, known as Cherenkov radiation, which is created when neutrinos interact with the ice.

Physicists worked with geologists to create models of the Earth’s interior to measure how neutrinos are absorbed by the Earth. While the team had hoped for evidence of higher physics at play, the results showed that the probability of neutrinos being absorbed was consistent with expectations from the Standard Model of particle physics, which scientists use to explain the fundamental forces and particles in the universe. This probability, that neutrinos of a given energy will interact with matter, is what physicists refer to as a “cross section”. It is expected to increase with energy in a calculable manner.

Francis Halzen, principal investigator for the IceCube Neutrino Observatory, said: ‘Understanding how neutrinos interact is key to the operation of IceCube. We were of course hoping for some new physics to appear, but we unfortunately find that the Standard Model, as usual, withstands the test.’

The Oxford team were responsible for calculating the probability of neutrino interactions with matter at energies well beyond those measured previously using accelerator neutrino beams. This calculation made use of crucial measurements of `parton distribution functions' at the HERA accelerator in Hamburg measured by Amanda Cooper-Sarkar, Professor of Particle Physics at Oxford & her colleagues in the Particle Physics sub-department.

Professor Subir Sarkar, Head of the Particle Theory Group who also represents IceCube at Oxford, said: ‘It is marvellous that even when the Earth blocks our ability to do astronomy using neutrinos as cosmic messengers, we can instead measure a fundamental physical property of neutrinos.’

The paper reveals that IceCube is not only supporting understanding of particle physics discoveries and neutrino astronomy, but also planetary science and nuclear physics.

James Whitmore, program director in the National Science Foundation’s physics division, said: ‘IceCube was built to both explore the frontiers of physics and, in doing so, possibly challenge existing perceptions of the nature of the universe. This new finding and others yet to come are in that spirit of scientific discovery.’

The team intend to repeat the study using expanded multiyear data, to collate any hints of new physics beyond the Standard Model. Looking to the future they hope to build a larger detector – up to 10 times larger than IceCube, which will enable them to study neutrinos of even higher energies. 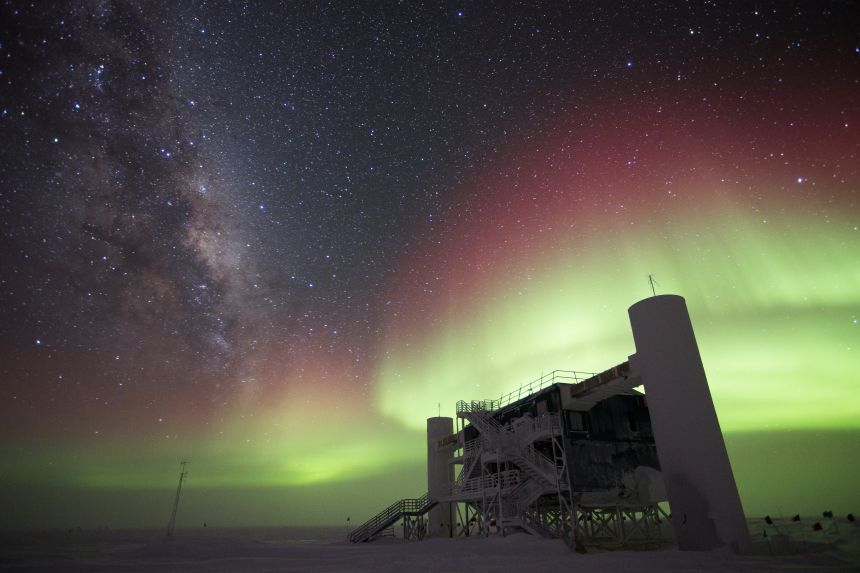 The IceCube Laboratory at the Amundsen-Scott South Pole Station, in Antarctica, hosts the computers collecting raw data. Due to satellite bandwidth allocations, the first level of reconstruction and event filtering happens in near real time in this lab. Only events selected as interesting for physics studies are sent to UW–Madison, where they are prepared for used by any member of the IceCube Collaboration.