My Body My Life, a new research-based exhibition, that challenges abortion stigma through clothing, will run next month at the Old Fire Station, Oxford, from 7-11 November 2017. Image credit: Amanda Gore
Published

Oxford University researchers have teamed up with peers at the Open University to create an innovative exhibition that will challenge abortion stigma through clothing and stimulate conversation around the Abortion Act, fifty years after it was passed.

My Body My Life, a new research-based exhibition, that challenges abortion stigma through clothing, will run next month at the Old Fire Station, Oxford, from 7-11 November 2017.

Designed to look like a fashion boutique, the unique exhibition uses clothing to bring a range of abortion experiences to life, representing just some of the nearly 200,000 abortions that take place in the UK every year.

First launched at the Edinburgh Festival, My Body My Life will make its next stop at the Old Fire Station, Oxford, and has been designed to mark the 50th anniversary of the Abortion Act, which introduced a set of legal grounds for abortion.

Academics from the Oxford Law Faculty and the Open University have worked together on the travelling exhibition, which is based around research on women’s experiences of abortion and features a series of supporting public engagement activities. The programme of events have been designed to stimulate conversation and give context and nuance to the event, and includes a series of evening talks and a panel discussion considering whether and how the Abortion Act should be amended.

Dr Imogen Goold, Associate Professor of Law at the Oxford Law Faculty, added: ‘This exhibition is a fantastic example of why it’s so important for academics to engage with the public about their work. My Body My Life brings this important research into the community, and will broaden public understanding of abortion, a subject that affects so many of us but about which we are often silent. Over the past 50 years, the Abortion Act has enabled thousands of women to access safe abortion services, ending the period of backdoor abortions that left so many women injured, and sometimes even dead. It is timely for us to
reflect on the positive impact the Act had, and to think about whether it needs amendment to further ensure women retain control of their bodies and their lives.’

The exhibition shows how easily an unplanned pregnancy can become a part of any woman’s life, how different women have made their decision about having an abortion, and what the process was like for them.

Most women will have over three decades of fertility to manage, and an unplanned pregnancy can happen at any time for all sorts of reasons. Even an intended pregnancy can become unwanted. Abortion is one of the most commonly performed gynaecological procedures in the UK, yet is still controversial and highly stigmatised - and in Northern Ireland the 1967 Act does not even apply. 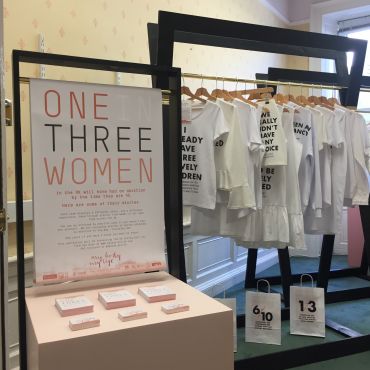 The organisers hope that by sharing women’s stories of abortion in their own words, the exhibition will challenge the lingering stigma and silence around the subject, and hopefully trigger conversation that inspires empathy for such a complex situation.

Lesley Hoggart, Associate Head of School, School of Health, Wellbeing and Social Care at The Open University explained the reason behind the creation of My Body My Life: ‘Although one in three women have an abortion, they may not talk about it. This means they do not talk about how they were using contraception but still became pregnant, how they took emergency contraception but still became pregnant, or a whole host of other scenarios.

'The reality is that one in 60 women will experience an unplanned pregnancy every year, and abortion is a necessary part of the reproductive control that every woman needs in order to participate equally and fully in society, not being bound to unwilling motherhood. There is nothing to be ashamed of in that. Secrecy feeds abortion stigma, and secrecy therefore needs challenging. This is what we are doing through bringing our research to life in this multi-media travelling exhibition.’

Share this innovative exhibition with your friends and followers

Save the date: My Body My Life, a new research-based exhibition, challenging abortion stigma through clothing, will run at the Old Fire Station, Oxford, from 7-11 Nov.
Tweet this

My Body My Life