Migratory birds are both attracted to and influenced by light. As a result, their behaviours alter drastically in the presence of artificial light at night, according to a new Oxford University collaboration, that was conducted at a unique landmark: the 'Tribute in Light' in New York.

Every year, billions of birds undertake migratory journeys during the spring and autumn months. Most of these spectacular movements go unseen, occurring under the cover of darkness. However, a new study published in the Proceedings of the National Academy of Sciences offers compelling evidence that artificial light at night causes radical changes in the behaviours of migrating birds.
Over the course of seven years, scientists from the University of Oxford, the Cornell Lab of Ornithology and New York City Audubon studied migrant bird behaviour in a truly unique setting: the “Tribute in Light” art installation that commemorates the September 11, 2001 terrorist attacks. In honour of the anniversary of the tragedy, in which nearly 3,000 people were killed, two blue beams of light, formed from 44 xenon bulbs of 7,000-watt intensity, shine into the night sky, mirroring the twin towers of the World Trade Center.

Benjamin Van Doren, lead author and a postdoctoral student at the Oxford University Department of Zoology, said: ‘We found that migrating birds gather in large numbers over New York City because they’re attracted to the lights. They slow down, start circling, and call more frequently. They end up burning energy without making any progress and risk colliding with nearby buildings or being caught by predators.’
‘This was a rare opportunity to witness the impact of powerful, urban, ground-based lights on nocturnally migrating birds,’ adds co-lead author Kyle Horton, now with the Cornell Lab, and at the University of Oklahoma during the study. ‘This analysis would not have been possible without the help of Tribute organisers.’ 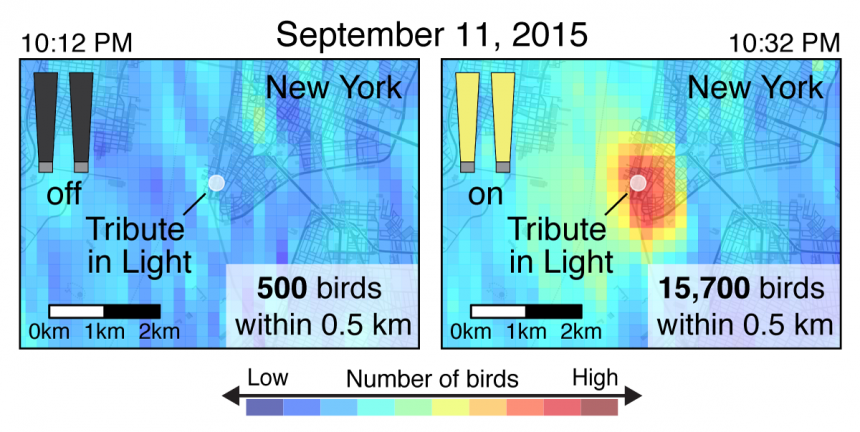 Images above were taken 20 minutes apart during the 2015 Tribute in Light and show concentrations of birds on radar with light beams turned off (left) and turned on (right).
Figure adapted from "High-intensity urban light installation dramatically alters nocturnal bird migration" in Proceedings of the National Academy of Sciences, September 2017.

Well before the results of the study highlighted the effects of the installation, the National September 11 Memorial & Museum formed a consensus with other interested groups to reduce the impact of the illumination on migrating birds. Several instances of large groups of birds being drawn to the light and subsequently becoming trapped in the installation had raised questions around its impact. As a result of this decision, the Tribute lights are turned off for 20 minutes when more than 1,000 birds are seen circling in the beams or flying dangerously low, to the point that they could crash into buildings.

Switching the lights off for 20 minutes during the Tribute provided a unique opportunity for the scientists to quantify changes in bird behaviour in several ways during the alternating periods of light and dark.
Co-author Andrew Farnsworth at the Cornell Lab, said: ‘We had more than 20 wonderful volunteers on the ground counting birds to confirm what was happening in the beams.

‘We also used remote sensing tools, including data from local National Weather Service radars, to understand the density and movements of the birds. Acoustic monitors recorded call notes and captured the vocal behaviour of birds in the beams. And we ran computer simulations to try to better understand the dynamics of the patterns we were observing.’

When the tribute was illuminated, the study’s authors found that densities of birds over lower Manhattan could reach 60 to 150 times the number that what would typically be found in the area at that time. The concentrating effects of the intense light on the birds reached as high as 4 kilometres, even on clear nights, in contrast with many previous studies that highlight the dangers of artificial light and nights with poor visibility. When the light beams were turned off, the birds dispersed within minutes to continue their migrations.

Although research at this urban light installation provided a way to measure a specific instance of light attraction, all light at night poses problems for birds, even in rural areas. The study's authors point out that one solution is relatively simple.

Co-author Susan Elbin of New York City Audubon, said: ‘we recommend buildings’ lights be turned off from midnight to dawn during migration season. This is true for areas around homes as well as other brightly-lit areas such as sports stadiums and construction sites. Birds already face enough challenges during migration, including collisions with reflective or transparent glass, without the added danger from artificial light at night.’

The paper features in Proceedings of the National Academy of Sciences