Students at the launch of the Seren Network's EAS hub in Wales.

A new collaboration between Jesus College, Oxford and the Welsh government's Seren Network to enable Wales' brightest sixth-formers to experience life at Oxford University has been announced today.

The partnership will see a selection of Wales' top students attend a bespoke summer school at Jesus College in August this year.

Students from each of the 11 Seren Network hubs across Wales will be given the opportunity to apply for the four-day summer school, where they will sample student life and attend lectures on subjects including demography, artificial intelligence, climate, trade, politics and literature. 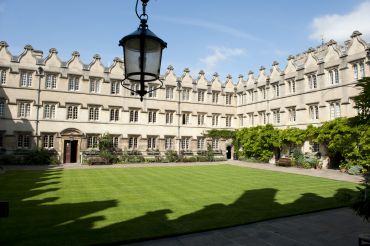 Set up in 2015 to address the decline in the number of Welsh students applying to top universities, the Seren Network is the Welsh government's flagship university access programme. It ensures Wales' brightest sixth-formers have the right support to make the most of their academic talents. More than 2,000 students are now involved with the network.

The Jesus College summer school is thought to be the first such programme aimed solely at Welsh students and was unveiled today by the Welsh government's Minister for Lifelong Learning and the Welsh Language, Alun Davies, at the Seren Network's second annual Beyond the Curriculum conference in mid-Wales.

Speaking ahead of the event, Mr Davies said: 'Raising the aspirations and attainment levels of Welsh school pupils to help them reach their academic potential is an ongoing priority for the Welsh government, and the Seren Network is playing a pivotal role in this ambition.

'Since its inception in 2015, the network has quickly grown to a recognised and valuable vehicle through which some 2,000 of the brightest pupils in Wales are now channelling and honing their academic talents.

'Today's announcement adds another tangible benefit for students. By enabling Wales' most academically gifted pupils to sample life at one of the world's best academic institutions, we are demonstrating that educational excellence is well within their reach, and equipping them with hands-on support and guidance to make sure they reach the top.'

Professor Sir Nigel Shadbolt, Principal of Jesus College, Oxford, said: 'Jesus College is incredibly proud of its enduring connection to Wales – a connection that goes back to the college's foundation in 1571. This new initiative will help ensure that we continue to welcome future generations of talented Welsh students here in Oxford.'