Oxford's Centre for Advanced Research will be located in Suzhou Industrial Park.

OSCAR – a multidisciplinary research, innovation and technology centre – will focus on research challenges and technologies that both complement the centre's location in SIP and capitalise on current Oxford research strengths, producing knowledge and innovation with the aim of developing the commercial potential of such technologies.

Research will initially be focused around the areas of biomedical engineering, biomedicine, advanced functional materials, environmental technology and energy, financial mathematics, computer science, and health. In the future, cooperation in other areas may be explored. 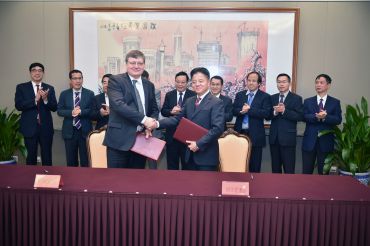 Professor Donal Bradley, Head of the Mathematical, Physical and Life Sciences Division at Oxford, signed the agreement on behalf of the University. He said: 'This is a wonderful moment for Oxford science and engineering as we embark on the creation of our first overseas research centre. We very much look forward to working closely with the Suzhou Industrial Park and our academic and industrial collaborators in Jiangsu province and elsewhere in China to progress a range of exciting societal and economic development opportunities.

'Our ambition is that OSCAR will become a paradigm of scientific excellence focused on global challenges – an ambition that will be greatly assisted by our location in Suzhou.'

Oxford and SIP began a series of visits and exchanges in 2012 and signed a memorandum of understanding a year later, with the intention of jointly establishing an Oxford research institute in SIP. In April 2015, the two parties agreed the major terms for the venture and have now signed an official collaboration agreement. The agreement was signed by Professor Bradley and SIP's chairman, Yang Zhiping.

OSCAR will be set up in Suzhou Dushu Lake Science and Education Innovation District, a district in SIP with a high concentration of science, education and innovation activity.

Earlier this year, the UK's Minister for Universities, Science, Research and Innovation, Jo Johnson, visited the OSCAR site to hear about the project as part of his trip to China.