Tens of thousands of reindeer are starving to death because heavy rain that later freezes is locking their winter fodder in a thick ice crust. This rising mortality rate also threatens an ancient nomadic culture that depends on the reindeer, says a new study.

Scientists interviewed nomadic reindeer herders in the Yamal-Nenets Autonomous Okrug of West Siberia, the world’s most productive reindeer herding region, to examine how global warming is affecting their way of life. While rain on snow does not cause problems in spring, it can be catastrophic for reindeer in the autumn when rain turns to an ice crust as plummeting normal temperatures return. This crust, often several centimetres thick, prevents the reindeer from feeding on fodder beneath the snow throughout the winter months. Two extreme weather events in 2006 and 2013 caused mass starvation among the reindeer herds, and researchers for the first time have linked these extreme weather events in the coastal mainland in northwest Russia with sea ice loss in the adjoining Barents and Kara seas. The findings are published in the journal, Biology Letters.

The most recent rain-on-snow event of November 2013 resulted in 61 000 reindeer deaths, about 22% out of 275 000 reindeer on the Yamal Peninsula, says the paper, which warns that these events are now increasing in severity. In this paper, the scientists combined empirical data and modelling for major extreme weather events in 2006 and 2013 to find that the likely trigger was brief periods of Barents and Kara sea ice thinning during early November.

This has implications both for the reindeer populations, as well as the last nomadic tribe in the Arctic for whom reindeer herding has been a way of life for countless generations

The researchers interviewed 60 herders and administrators in the region between March 2014 and April 2016, collecting detailed oral histories of how their experiences and herding movements have changed over several decades. Based on the herders' evidence, the paper says these extreme weather events occur about once every decade. The heavy ice crusts that form after the rain on mainland tundra reindeer rangelands are having long-term and serious effects on the indigenous tribe of around 6,000 Yamal Nenets, who are among the last truly nomadic reindeer herders in the Arctic. Hard and thick ice crusts make it extremely difficult for reindeer to dig through the snow, and the longer that such crusts persist through the winter, the weaker animals become. 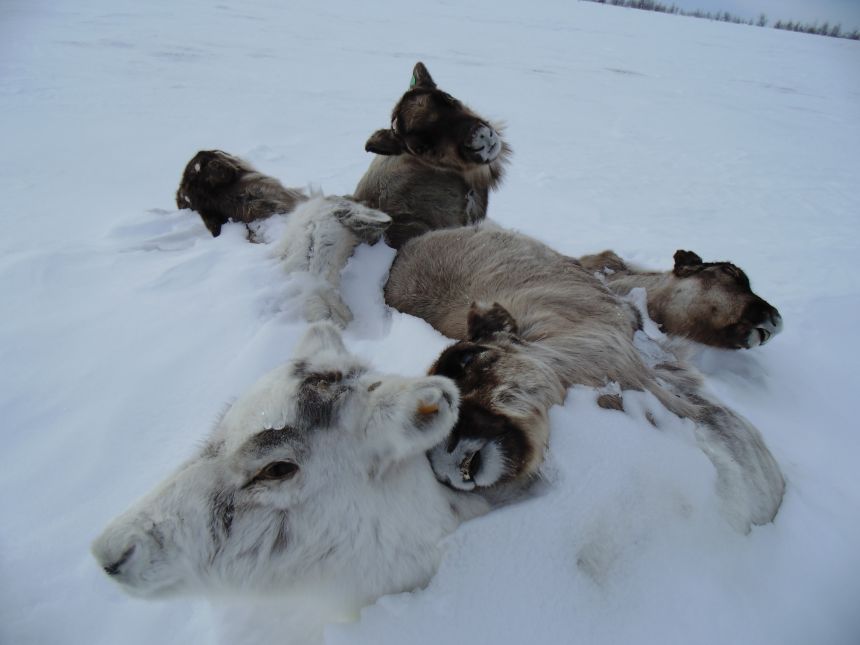 Reindeer starve to death because a thick ice covers their food.

'In a normal year, crusted snow patches are common, but herds can be relatively easily led to nearby areas with softer snow,' says Research Professor and Bruce Forbes from the Arctic Centre at the University of Lapland. ‘The reason the 2013 event was so catastrophic was that heavy rains saturated much of the snow cover from top to bottom, so when air temperatures plummeted the pastures were frozen beneath a thick, heavy layer of ice. This left animals locked completely out of pastures across the entire southern Yamal Peninsula, an area covering some 27 000 km2.’

The paper describes how the Yamal Nenets migrate year round, herding semi-domesticated reindeer across distances of up to 1200 km annually. Reindeer are an important livelihood and a fundamental part of their ancient and unique culture, says the paper. Researchers combined archival data from various satellite sensors with climate modelling to characterise two specific time windows: 5-10 November 2006 and 5-10 November 2013. Long-term averages of sea ice and atmospheric conditions reveal that during both periods, the sea ice coverage and concentration in the Barents and Kara sea ice were significantly low, while atmospheric humidity was significantly high. The herders report 24 hours of rain on 8 November 2013, swiftly followed by freezing temperatures throughout the rest of the winter. Those who lost their reindeer through starvation were forced to resort to fishing, while also borrowing breeding stock to rebuild their herds.

Co-author Dr Marc Macias-Fauria, from the University of Oxford School of Geography and the Environment, said: 'Understanding the relationship between retreating sea ice and Arctic animal and plant life is essential if we are to predict how ecosystems will respond to rapid, ongoing environmental change. We are losing sea ice at an accelerating rate in the Barents and Kara Seas and our analysis suggests this is why there is more rain over the land in this region. This has implications both for the reindeer populations, as well as the last nomadic tribe in the Arctic for whom reindeer herding has been a way of life for countless generations.'

The research was part of the RISES and HUMANOR projects funded, respectively by the Academy of Finland and JPI Climate, and led by the Arctic Centre at the University of Lapland.