Chicks that are competing with siblings or whose parents are likely to die or switch partners tend to be less honest when begging for food, research into sibling rivalry in birds by Oxford University scientists has found.

That's because these events introduce conflict into the family group.

Analysis of more than 100 studies across 60 species of bird also found that chicks are more likely to exaggerate their need for food if their parents are likely to breed again in the future – backing up existing evolutionary theory about natural selection.

The results are published in the journal PNAS.

Co-author Shana Caro, a doctoral candidate in Oxford's Department of Zoology, said: 'We hypothesised that you could explain the relative levels of honesty among chicks across species based on how much conflict exists. A chick that has the nest to itself is always going to get the worm, but if you add other chicks then there is going to be conflict over food resources.

'We wanted to see whether dishonesty increases as the number of siblings sharing a nest increases.' 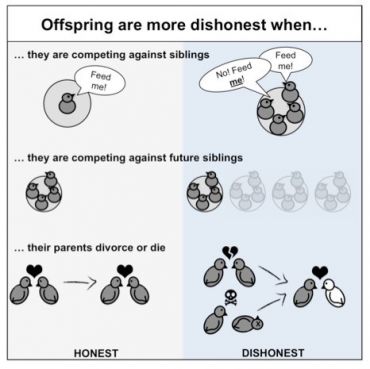 The researchers mathematically analysed 108 scientific studies featuring information relating to the begging behaviour of chicks across 60 species. They took into account factors such as birds' condition, number of siblings, and relatedness to siblings.

Shana Caro said: 'We found that offspring are less honest about their need for food when they face competition from current siblings, when their parents are likely to breed again, and when parental divorce or death means any future siblings can only be half, not full, siblings. In short, anything that brings in conflict is detrimental to honesty. Over millions of years, natural selection has caused species with higher levels of conflict to evolve chicks that beg for food even when they don’t need it.'

'While dishonesty when competing against existing siblings for food might be expected, what's interesting is that these results show that unborn birds – which may or may not ever exist – have an effect on the behaviour of chicks. This may be because if parents are saving resources for future breeding attempts, they could be less responsive to their current brood’s begging. It's therefore in chicks' interests to exaggerate their begging to make sure they get enough food and aren’t disadvantaged by their parents' attempts to save energy.'

Begging for food can take the form of chicks calling out, flapping their wings, or opening their mouths as wide as possible. The most honest species, according to the meta-analysis, tend to be long-lived, single-mate seabirds such as the shearwater or albatross, while dishonesty is most prevalent among species such as blackbirds or great tits, which produce larger broods and tend to breed with different mates.

The paper 'Sibling conflict and dishonest signalling in birds' is published in the journal PNAS.