The Selenium mobile autonomy system being developed by Oxford University's world-leading Mobile Robotics Group has been demonstrated at this year's Shell Eco-marathon Europe.

Shell Eco-marathon Europe, which took place as part of Make the Future London from 30 June to 3 July, is a unique competition that challenges students around the world to design, build and drive the most energy-efficient car. This year, the event included a special showcase of autonomous technology, featuring an 'Autonomous UrbanConcept Vehicle' equipped with cutting-edge software developed by Oxford's robotics experts.

Among the passengers trying out Oxford's technology was Formula 1 star Kimi Raikkonen.

Selenium is the same technology that underpins the Oxford RobotCar – the UK's first autonomous car approved for public trials – and the LUTZ project, which will bring autonomous pods to the pavements of Milton Keynes.

This Autonomous UrbanConcept Vehicle showcase, like Shell Eco-marathon as a whole, was designed to inspire the engineers and scientists of the future and demonstrate the progress being made with this revolutionary technology. 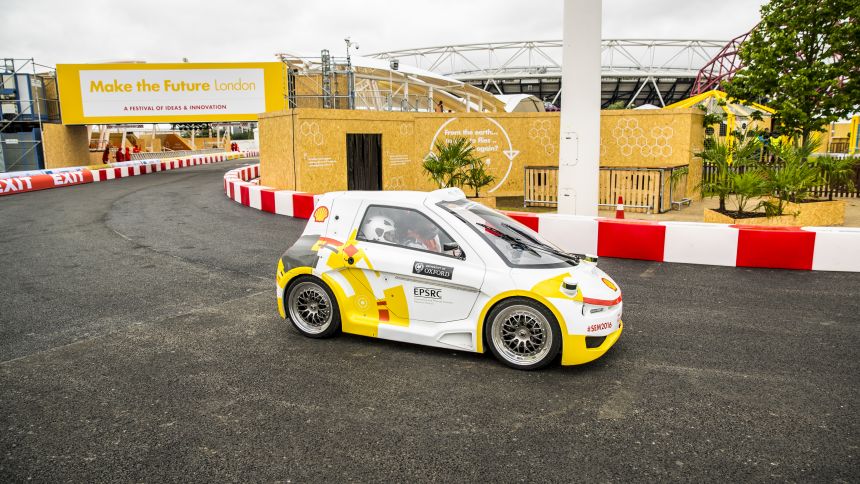 The Autonomous UrbanConcept Vehicle, powered by Oxford software, demonstrated what the future of mobility will look like.

Professor Ingmar Posner, co-director of the Mobile Robotics Group in Oxford University's Department of Engineering Science and leader of the project said: 'This was a hugely exciting opportunity for Oxford's Mobile Robotics Group to showcase the autonomous technology we have been working on for several years.

'We have been fortunate to receive tremendous support from the Engineering and Physical Sciences Research Council, which has allowed us to develop this technology to the stage where we are able to demonstrate it at a high-profile event like Shell Eco-marathon.

'But for us, the most important thing is that we are able to inspire the engineers of the future, who will be taking on challenges such as developing, testing and refining the autonomy technology that is set to revolutionise the worlds of mobility and transport.'

He added: 'The prime challenge in the area of autonomous vehicles is trust, and to create this you need to get this technology out into controlled environments.

'This is why Shell Eco-marathon is outstanding, as it has always provided a real-world environment where students can experiment with new technologies in a safe manner.' Dr Chi Hay Tong, a postdoctoral researcher in the Mobile Robotics Group and technical lead of the Shell Eco-marathon project, said: 'Allowing the engineers of the future to engage with autonomy technology, with all its potential, and all its potential pitfalls, in a safe and controlled environment such as Shell Eco-marathon is a vital stepping stone towards robust and reliable autonomous vehicles.'

'By presenting this concept vehicle we aim to inspire our participants and keep the competition exciting, challenging and relevant for the future of mobility.'

Shell has been working with the internationally acclaimed Mobile Robotics Group at Oxford University to build the Shell Eco-marathon Autonomous UrbanConcept Vehicle. The Mobile Robotics Group was chosen because of its outstanding research in the area of land-based mobile autonomy, its proven ability to solve real world problems, and its dedication to further STEM education by providing inspiration, purpose and lower entry barriers to this field.

Shell aims to introduce the new Autonomous UrbanConcept Vehicle category into Shell Eco-marathon in 2018, when students will be invited to develop their own autonomous vehicles to take part in the competition.

The launch of Shell Eco-marathon Autonomous UrbanConcept Vehicle formed part of Make the Future London, a free four-day festival of ideas and innovation taking place at Queen Elizabeth Park from 30 June to 3 July 2016. The event is dedicated to showcasing bright energy ideas in action and provides a platform for innovation, collaboration and conversation around the global energy challenge: the need for more energy and less CO2 emissions.