Vertebrae from the plesiosaur skeleton donated to the Oxford University Museum of Natural History.

A rare 165 million-year-old plesiosaur skeleton has been donated to the Oxford University Museum of Natural History after being discovered in a quarry near Peterborough.

The 5.5 metre-long marine reptile, nicknamed 'Eve', was found by palaeontologists from the Oxford Clay Working Group in November 2014. It is now being studied at the Museum and may prove to be a previously unknown species of plesiosaur.

Plesiosaurs were long-necked sea creatures that lived during the time of the dinosaurs. They died out 66 million years ago.

The specimen, discovered at a site owned by building product manufacturer Forterra, was first spotted by Oxford Clay Working Group member Carl Harrington, who noticed a tiny fragment of bone sticking out of the clay. Over the course of four days, Mr Harrington and eight others dug up more than 600 pieces of fossilised bone. Mr Harrington then spent over 400 hours cleaning and repairing the specimen.

Mr Harrington said: 'I'd never seen so much bone in one spot in a quarry. As I was digging among the wet clay, the snout of a plesiosaur started to appear in front of me. It was one of those absolute "wow" moments – I was the first human to come face to face with this reptile.'

The remains have now been generously donated to the Museum by Forterra. Brian Chapman, Head of Land and Mineral Resources at Forterra, said: 'We are thrilled that such a rare and important prehistoric specimen was unearthed at our Must Farm quarry, and we're happy to be able to donate it to the Oxford University Museum of Natural History, where it will be studied by leading palaeontologists.' 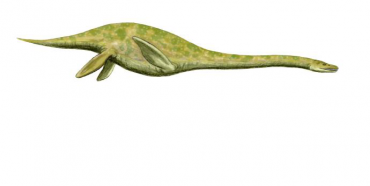 Artist's impression of Muraenosaurus leedsei, a similar plesiosaur from the Middle Jurassic.

The newly discovered plesiosaur had a 2.5 metre-long neck, a barrel-shaped body, four flippers and a short tail. Its skull is still preserved inside a block of clay, and the painstaking task of removing it will now be undertaken at the Museum. Dr James Neenan, a research fellow at the Museum, and Professor John Hutchinson from the Royal Veterinary College have CT-scanned the block to reveal the location of the bones inside. This will aid the removal of the skull from the clay.

On 27 January, visiting secondary school pupils will get the chance to see the plesiosaur for themselves.

Dr Hilary Ketchum, Earth Collections Manager at the Museum, said: 'We are so excited that the plesiosaur has come to the Museum, where it will be used for research, education and display. We are very grateful to Forterra for their donation, and of course to the Oxford Clay Working Group, who have dedicated a great deal of time, energy and passion to the discovery and excavation of this fantastic fossil.'