Louise Richardson was installed as Vice-Chancellor of Oxford University on 12 January.
Published

Speaking as she was installed as the 272nd Vice-Chancellor in Oxford’s history, Professor Richardson called on the University to show 'agility' in an era of globalisation and technological change.

She also urged colleagues to maintain a long-term perspective in addressing the challenges of the future.

Professor Richardson said: 'If we can provide leaders for tomorrow who have been educated to think critically, to act ethically and always to question, these are the people who will prevent the next financial crisis; who will help us to grapple with the fundamental questions prompted by the accelerating pace of technological change, as we confront profound ethical choices about the prolongation and even replication of life. People who will force us to confront the costs we are imposing on the next generation by our wasteful use of the earth's resources; who will articulate our obligation to the vulnerable, the poor, the victims of war, oppression and disease, wherever they live.'

Professor Richardson, the first woman to hold the post of Vice-Chancellor at Oxford, spoke as she was admitted to office at a ceremony in the Sheldonian Theatre, in front of Congregation, the University's parliament.

In her address, Professor Richardson also strongly defended the academic principles of autonomy and freedom of inquiry.

She criticised moves towards greater central control of higher education, saying: 'Less necessary is the ever increasing cost of compliance with ever more bureaucratic, ever more intrusive, and ever less useful regulation, much of it, paradoxically enough, designed to ensure value for money. Instead it diverts resources – both financial and intellectual – from the central tasks of research and teaching.'

The Vice-Chancellor stressed that universities must address the challenges of ensuring freedom of debate amongst their student communities.

Professor Richardson said: 'How do we ensure that they appreciate the value of engaging with ideas they find objectionable, trying through reason to change another's mind, while always being open to changing their own? How do we ensure that our students understand the true nature of freedom of inquiry and expression?' 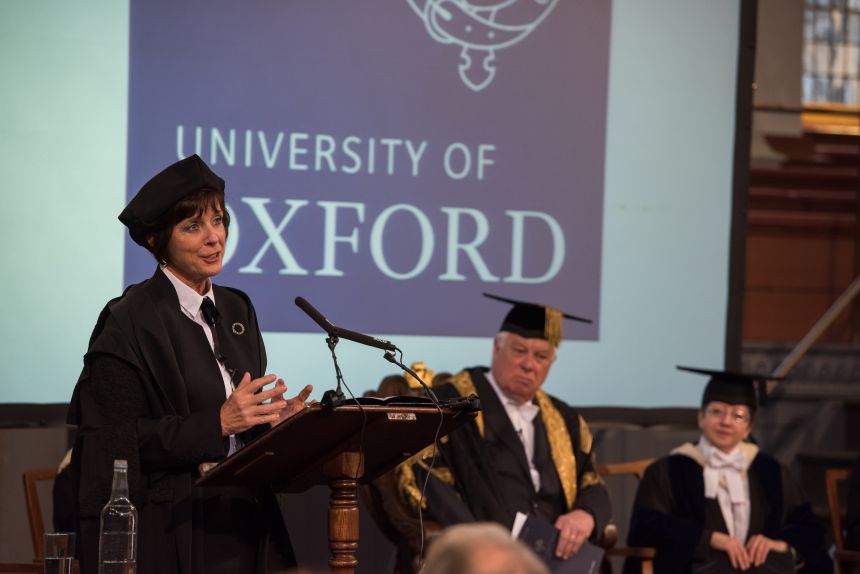 Professor Richardson joins Oxford from the University of St Andrews, where she was Principal and Vice-Chancellor for seven years. She was previously Executive Dean of the Radcliffe Institute for Advanced Study at Harvard University. She is an internationally-renowned scholar of terrorism and security studies and has also won several awards for the excellence of her teaching.

Professor Richardson was welcomed to her post by the Chancellor of the University, Lord Patten of Barnes. Lord Patten told her: 'You have, Professor, an outstanding record as a teacher and scholar, and have been until recently the head of another eminent university. I know that you would wish to be judged primarily not on the glass ceilings you have smashed, but on your achievements as an academic leader on both sides of the Atlantic. They provide the principal argument for our choice of you as our next leader, as this world-class university confronts the trials and the opportunities of the twenty-first century.'

Professor Richardson ended her speech by appealing to colleagues: 'Let's all make the most of the time we have here in this privileged, magical, extraordinary place to leave it even better than we found it. Let’s keep our eyes firmly fixed on the future, without forgetting the traditions that bind us to our forebears and the values and interests that unite us to one another.

'Please join me: it will be hard, it will be fun, but we owe it to those on whose shoulders we stand and Oxford deserves no less than our very best.'