Massive declines in the populations of whales and other large mammals have disrupted the system of recycling important nutrients such as phosphorus.

A new study reveals that in the past large land animals, whales, seabirds and fish played a vital role in recycling nutrients from the ocean depths, spreading them far and wide across the globe and taking them deep inland.

However, the paper says massive declines in their populations coupled with the extinction of most of Earth's large mammals have disrupted this efficient system of recycling important nutrients, particularly phosphorous. The researchers calculate that the ability of whales and terrestrial megafauna to transport nutrients around the globe has been reduced to just 6 percent of their global capacity before mass extinctions and population declines. The full paper is published in the journal Proceedings of the National Academy of Sciences.

The research, led by the University of Oxford with researchers from the United States and other European institutions, explains that some whales and other marine mammals feed in nutrient-rich waters at depths of around 100 metres and come to the sea’s surface to defecate and urinate, releasing vital nutrients like phosphorous.

The researchers used existing data, showing global declines in whale populations of 66 percent to 90 percent within the past 300 years, to compare the ability of the whales to distribute nutrients both historically and today. Previously, whales and other marine mammals moved a global total of around 340 million kilograms of phosphorous a year from the depths to the water surface, but now transport just 75 million kg of phosphorous (about 23 percent of their former capacity). The researchers used data on past seabirds and anadromous fish populations (that swim in both the sea and rivers) that feed in the ocean and later release the nutrients on land when they defecate or their bodies decompose. 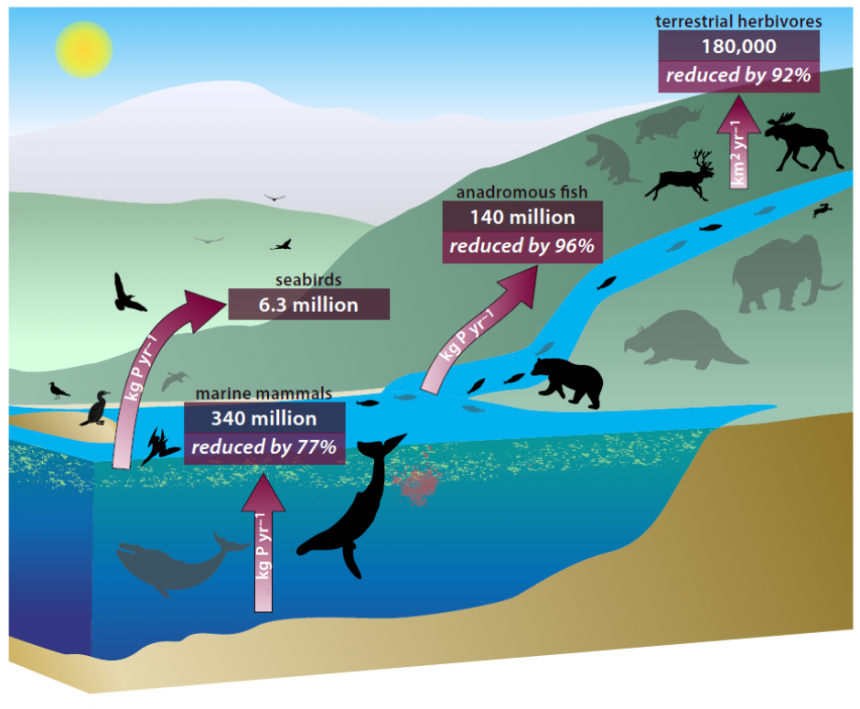 A diagram shows a potential route of nutrient transport of the planet in the past.

The researchers calculate that in the past, seabirds and fish populations could have transferred around 150 million kg of phosphorous a year from sea to land. They estimate that fish played the major part, transporting around 140 million kg a year on average compared with seabirds that averaged at 6.3 million kg a year. This sea to land transfer of nutrients has declined by more than 90 percent today, says the paper.

The researchers used a mathematical model similar to one used by physicists to calculate the diffusion of heat to estimate how much and how far animals were able to move nutrients away from a concentrated source. Due to the enormous size and range of great whales, the paper says once they might have carried nutrients away from fertile areas even more efficiently than the large animals that roamed the earth before mass extinctions around 12,000 years ago.

Lead author Dr Christopher Doughty, from the Environmental Change Institute at the School of Geography and the Environment, University of Oxford, said: 'Previously animals were not thought to play an important role in nutrient movement. Here we show that in the past, they are likely to have played a key role in keeping the planet fertile. Extinctions and population reductions, however, have reduced this role to less than 10 percent of what it once was.

'Phosphorus is a key element in fertilizers and easily accessible phosphate supplies may run out in as little as 50 years. Restoring populations of animals could help to recycle phosphorus from the sea to land increasing global stocks of available phosphorus in the future.'

'Efforts to protect whales and seals from hunting in the past few decades have had some strong results,' said Joe Roman from the University of Vermont, a co-author of the study. 'Although there is still a long way to go in restoring large marine and terrestrial species, global conservation projects aimed at re-establishing these nutrient pathways, from the oceans to rivers and land, will reap benefits for wildlife and people.'

The full paper, 'Global nutrient transport in a world of giants' appears in the journal Proceedings of the National Academy of Sciences (PNAS).