Oxford has committed to strong, positive action to achieve gender equality at the University and across the UK and international higher education sectors as an 'IMPACT Champion' for UN Women's HeForShe movement.

UN Women launched HeForShe last September with the aim of mobilising one billion men and boys in support of gender equality. The UN has now unveiled world leaders, businesses and universities, including Oxford, as ‘10X10X10’ IMPACT champions for the movement. As a university champion, Oxford has pledged to increase the number of women in senior positions, to build on work creating a safer campus for its whole community and to promote gender equality among its peers in the world’s research-intensive universities.

Oxford signed up to HeForShe at a ceremony at the University’s Kellogg College, attended by United Nations Under Secretary-General and Executive Director of UN Women, Dr Plumzile Mlambo-Ngcuka.

Announcing Oxford’s commitment, the University’s Vice-Chancellor, Professor Andrew Hamilton said: 'Addressing gender equality and ensuring that Oxford is a safe and inclusive space for all our students have been among my main priorities. We have already agreed targets for improving the representation of women in academic roles and we will now consider under the HeForShe campaign how we can achieve greater equality for women across all areas of our work.'

Dr Mlambo-Ngcuka said: ‘This group of champions have made commitments that will bring immediate, tangible change in their spheres of influence. We believe that their actions will start critical shifts in thinking and behaviour in corporate, academic, and political cultures. We have an ambitious agenda – to reach gender equality by 2030 - and it’s big, authoritative  steps like this that will catch people’s attention. Showing how they make transformative change, and reporting back on its scale and effect is part of their commitment in this pilot initiative.’ 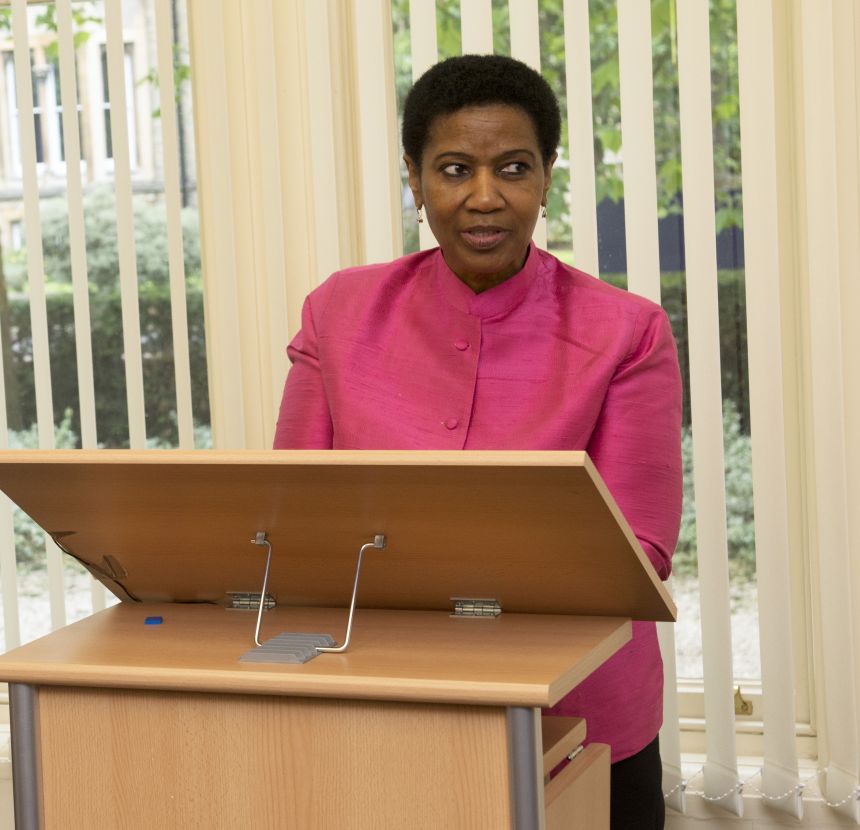 HeForShe’s IMPACT 10X10X10 programme engages 30 key leaders across three sectors – the public, the private and academia. All 30 Impact champions have made common commitments and also developed additional tailored commitments, reviewed by an expert team at UN Women and approved personally by Dr Mlambo-Ngcuka.

All the University champions have committed to develop and implement gender awareness and consciousness raising for students and staff (including a mandatory orientation for all new students), along with programs that will address gender-based violence. They have also agreed to meet frequently with other IMPACT champions, to  measure and report on progress, to share best practice and to engage other universities with this cause.

Oxford’s first additional commitment is to achieve significant representation of women in senior academic and leadership roles across the University. The initial target is at least 30 per cent of women on its senior decision-making bodies and in professorial roles. Evidence shows that a critical mass of at least 30 per cent women is needed to achieve further positive impacts. Achieving the target will build on the University’s existing success under Athena SWAN, the UK initiative to address under-representation of women in research and academic roles.

Secondly, Oxford has pledged to extend its work in creating a safe University environment. The University has already introduced a new Harassment Policy and Procedure, making it clear that any form of harassment, including sexual harassment, assault or violence, will not be tolerated. All students and staff have been made aware of the new procedures and more than 300 voluntary harassment advisors have been trained in their implementation.

Under HeForShe, the University aims to go further. Sexual Consent Workshops run by Oxford University Student Union (OUSU) will be compulsory for all new undergraduate students and available to all graduate students. The University is also working with OUSU to create a First Response mobile phone app for students who witness sexual violence in a range of social situations. Other initiatives include extending the pioneering student-run Good Lad initiative, which teaches positive masculinity and respect to male students.

Dr Rebecca Surender, Oxford University Pro Vice-Chancellor and Advocate for Diversity, said: 'UN Women selected its IMPACT champions for their excellence in public service, their global reach and their willingness to drive and inspire change. A diverse leadership and a safe campus are core priorities for Oxford. We look forward to working with the UN and our fellow champions on our gender equality commitments and to sharing the HeForShe agenda with our higher education partners around the world.'