Lifestyle-related disease is on the rise in South Africa, including high blood pressure. An ingenious partnership involving Oxford University is putting the nation’s extensive mobile phone network to work in beating the disease.

Out in the townships of South Africa’s Western Cape, unemployment can run at 44 per cent. Entire households may depend on a single old age pension for food. Gang violence leaves people wary of being robbed on the way to a clinic appointment.

With life so chaotic and stressful for many, remembering to take your hypertension medication may seem like a small side issue. But while HIV and TB are epidemic in many communities, there is also a creeping rise in chronic lifestyle diseases. These include hypertension, now the leading cause of death and disability worldwide. According to the South African Medical Research Council, 6.2 million people in a population of 52 million have high blood pressure and 3.2 million have unacceptably high levels, heightening the risk of heart attacks and strokes.

Inequity in South Africa’s health care is high. Many people in the areas surrounding towns and cities can’t get to the care that they need. Those patients that do attend often have problems taking tablets or forget to take them or abandon their medication once they start to feel a little better. Many patients don’t like sitting and waiting in clinics, while information leaflets about adherence to a treatment course are often unread. Some simply drop out of the care system.

Since 2009, Oxford Professor of General Practice Andrew Farmer, Professor of Endocrinology and Diabetes at the University of Cape Town and head of the Chronic Disease Initiative for Africa (CDIA) Naomi Levitt, and epidemiologist and medical doctor Kirsty Bobrow have been working together on innovative solutions to these challenges.

Early on, the team identified one potential strategy in making use of mobile phones. South Africa’s mobile network has excellent coverage across the country and almost 90 per cent of the population, even in remoter areas, possesses a phone. Professor Farmer says: ‘It seemed evident that we could use this network in health care, simply to send text messages, automatically and on a wide scale.’

The result has been the SMS-Adherence Support Trial (StAR), a partnership involving Oxford, the CDIA and the University of Cape Town (UCT) and the South African Medical Research Council (SAMRC). Professor Farmer and Dr Bobrow started working with patients with high blood pressure and primary care clinic staff in the Western Cape. Together, they compiled a library of messages suitable to be used as text prompts and reminders. The resulting intervention was then tested at one large clinic serving the Langa and Bonteheuwel townships.

Dr Bobrow, who is South African, first worked on the project as a post-doctoral research fellow with Professor Farmer in the Nuffield Department of Primary Care Health Sciences. Now working at UCT, she sums up the issues the team faced: ‘It’s important that we keep you in care, keep you on medication and keep your blood pressure controlled. How do you get people to stay in care? How do you get them to come back and to keep coming back? You need to remind them to come back, improve the experience they have at the clinic, and have people think about their clinic as a caring space.’

Professor Farmer says: ‘The SMS-messages have a wide range. They can be prompts to collect your medicine or to take it regularly. Others focus on worries people may have about side-effects. Or we can suggest what to talk about with their families about illness – many people are reluctant to. Sometimes we just wish them Happy Birthday.’

Tone is important, and the team consulted with patients and health care providers to make sure the right words were used in the different languages of the project, including English, Afrikaans and Xhosa. Patients are reminded with a ‘Please would you...’ rather than ‘You must’. If someone misses an appointment, they are told ‘We missed you today’, rather than reprimanded. Travelling to the clinic is difficult for many, so appointment reminders are sent out two days in advance to give patients time to prepare. 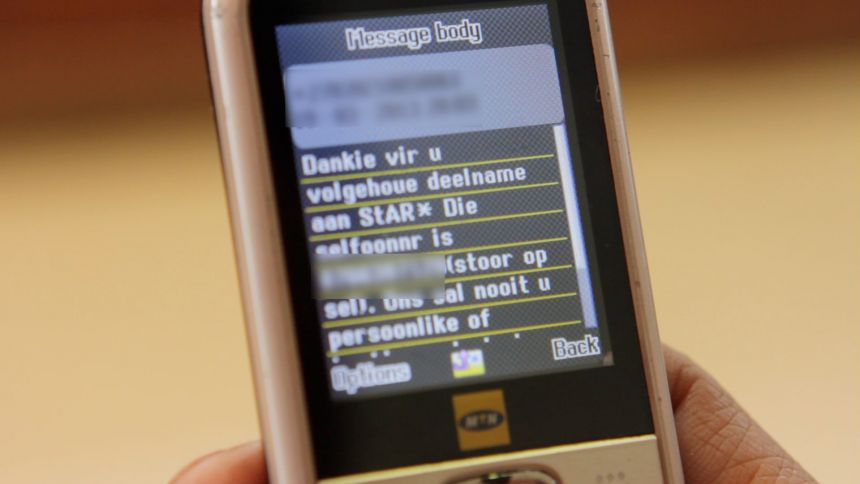 The project was built on a strong technical underpinning. Working with Professor Lionel Tarassenko of Oxford Institute of Biomedical Engineering, who bought funding for the project from the Wellcome Trust and the Engineering and Physical Sciences Research Council, a team of DPhil students, including Thomas Brennan and David Springer, were brought on board.

David, who also has South African roots, set up a system that could handle data from patients and could work out what message to send them and when, running with very little extra input from the clinic. He says: ‘I adapted an app for the clinic to collect all the data. So we had all the information about patients’ medical health records accessible by this module, which is all we needed to send the texts.’

More than five years on, the team is nearing the end of a trial involving 1300 patients. Professor Farmer, himself a GP back in Oxford, says: ‘It’s clear that people found using the system very helpful. We have stayed in contact with 97 per cent of patients, which in itself demonstrates how people felt this was relevant.’

At the same time, the partners have been carrying out qualitative evaluation of the trial. Dr Bobrow, Dr Natalie Leon and Ms Jocelyn Muller of the South African MRC, and Dr Rebecca Surender, Associate Professor at the University of Oxford, designed a qualitative investigation of patients’ experience of the trial intervention and of health provider’s views on its relevance and usefulness.

Dr Leon, a specialist scientist at the MRC with a background in clinical psychology, explains: ‘Among patients we found many people who already had a system for remembering their medicines found the SMS intervention reinforced their own reminder system. A smaller group acknowledged having a daily struggle with remembering and, for them, the SMS intervention was experienced as extremely helpful in improving their adherence and gaining better control of their health.

‘Some were really struggling with chaotic lives, high levels of stress and finding it difficult to adhere to their medication regime. For many of them, the texts regenerated a feeling of self-worth and feeling connected. A lot of them said they loved getting the Happy Birthday messages. And many said the messages started getting into their minds, becoming a natural part of behaviour and becoming a source of motivation to adhere.’

Some of the consequences have been unexpected. Dr Surender says; ‘It’s hard to imagine just how much strain these clinics are under. People get up at four o’clock in the morning just to get in line before six am to be seen. If for some reason they were unable to make their appointment, they told us it was impossible to get through on the phone to reschedule. The texts have revolutionised people’s experience, made them feel much more in control. We weren’t expecting that but it’s an extremely valuable development. People have talked about how this intervention is making them much more responsible for their own healthcare generally.’ 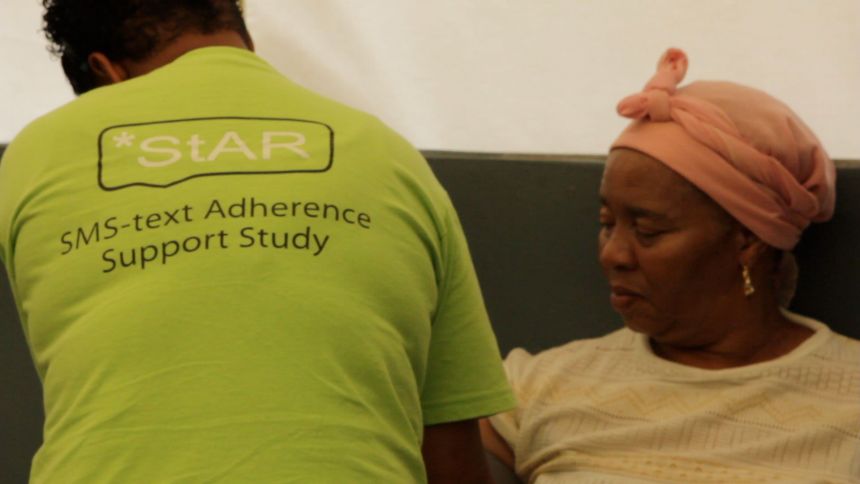 The StAR team in action, supporting hypertension treatment at a clinic in the Western Cape

Dr Surender also stresses the importance of the collaborative nature of the research, across disciplines and across countries. She says: ‘A real strength of the study was that we had a local team involved who knew the environment and the patients very well. South Africa has eleven formal languages, so we needed to know the nuances of what was being said – it’s important not just for interpretation but also for understanding the meaning behind the words.’

One major success of the project has been increasing research capacity in South Africa and strengthening the research links between Oxford and South African academic institutions. Drs Brennan and Bobrow and David Springer are all Oxford graduates funded through South African Rhodes Scholarships and all three remain committed to improving the nation’s health care.

South African policy makers are taking a great interest in mhealth and StAR has been watched with interest. There are plans to start new trials in Cape Town and Johannesburg in South Africa and in Lilongwe in Malawi, and also to see if the intervention could work with people with diabetes. All the team are encouraged by progress but warn there are limits to the intervention’s effectiveness in isolation. The clinical infrastructure needs to be there, tablets need to be available when the texts say they will be and patients need to feel respected and valued.

Nevertheless, Dr Leon believes the evidence compiled by StAR will help to influence healthcare policy in South Africa. She said: ‘It’s addressing a real priority clinical issue. It’s appealing as it can operate in low income areas. There is a real political will to generate further interventions. This started as quite a small collaboration but it’s growing into a much larger one.’