The infants in the study were ‘poked’ on the bottom of one foot with a special retracting rod simulating a sensation of pain that could then be studied using Magnetic Resonance Imaging (MRI). The rod never broke the skin.
Published

The brains of babies 'light up' in a very similar way to adults when exposed to the same painful stimulus, a pioneering Oxford University brain scanning study has discovered. It suggests that babies experience pain much like adults.

The study looked at 10 healthy infants aged between one and six days old and 10 healthy adults aged 23-36 years. Infants were recruited from the John Radcliffe Hospital, Oxford, and adult volunteers were Oxford University staff or students.

During the research babies, accompanied by parents and clinical staff, were placed in a Magnetic Resonance Imaging (MRI) scanner where they usually fell asleep. MRI scans were then taken of the babies' brains as they were 'poked' on the bottom of their feet with a special retracting rod creating a sensation 'like being poked with a pencil' – mild enough that it did not wake them up. These scans were then compared with brain scans of adults exposed to the same pain stimulus.

The researchers found that 18 of the 20 brain regions active in adults experiencing pain were active in babies. Scans also showed that babies’ brains had the same response to a weak 'poke' (of force 128mN) as adults did to a stimulus four times as strong (512mN). The findings suggest that not only do babies experience pain much like adults but that they also have a much lower pain threshold.

The research was funded by the Wellcome Trust and is reported in the journal eLife.

'Up until recently people didn't think it was possible to study pain in babies using MRI because, unlike adults, they don’t keep still in the scanner!' said Dr Rebeccah Slater of Oxford University's Department of Paediatrics, lead author of the report. 'However, as babies that are less than a week old are more docile than older babies, we found that their parents were able to get them to fall asleep inside a scanner so that we could study pain in the infant brain using MRI.

'This is particularly important when it comes to pain: obviously babies can’t tell us about their experience of pain and it is difficult to infer pain from visual observations. In fact some people have argued that babies' brains are not developed enough for them to really 'feel' pain, any reaction being just a reflex – our study provides the first really strong evidence that this is not the case. This work builds on foundational related imaging work in babies led by our colleagues at UCL.'

The researchers say that it is now possible to see pain 'happening' inside the infant brain and it looks a lot like pain in adults.

As recently as the 1980s it was common practice for babies to be given neuromuscular blocks but no pain relief medication during surgery [1]. In 2014 a review of neonatal pain management practice in intensive care highlighted that although such infants experience an average of 11 painful procedures per day 60% of babies do not receive any kind of pain medication [2].

'Thousands of babies across the UK undergo painful procedures every day but there are often no local pain management guidelines to help clinicians. Our study suggests that not only do babies experience pain but they may be more sensitive to it than adults,' said Dr Slater. 'We have to think that if we would provide pain relief for an older child undergoing a procedure then we should look at giving pain relief to an infant undergoing a similar procedure.'

Dr Slater added: 'Recent studies in adults have shown that it is possible to detect a neurological signature of pain using MRI. In the future we hope to develop similar systems to detect the 'pain signature' in babies' brains: this could enable us to test different pain relief treatments and see what would be most effective for this vulnerable population who can’t speak for themselves.' 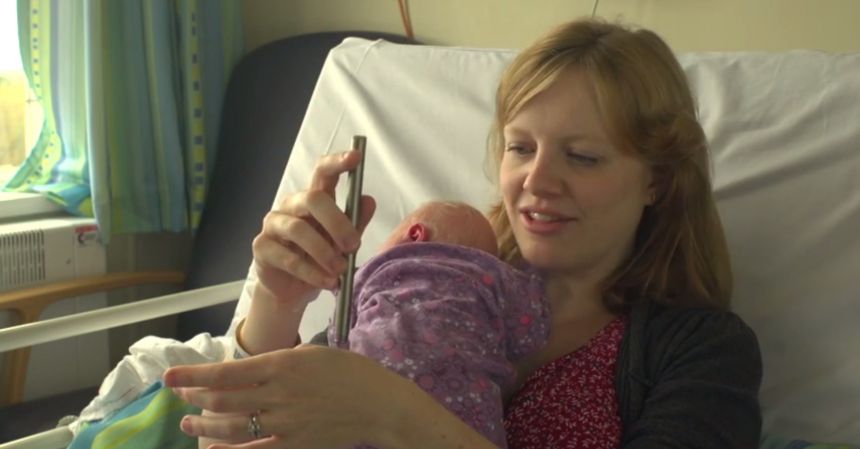 Rachel Edwards, aged 33 and from Oxford, who gave permission for her son Alex to take part in the study demonstrates how the retracting rod works on herself.

Rachel Edwards, who is 33 and from Oxford, gave permission for her son Alex to take part in the study. Alex was the first baby to be placed in the MRI scanner:

Rachel Edwards said: 'People know so little about how babies feel pain, you can tell they are in distress from their reaction and I was curious about why they react in the way they do.

'Before Alex went in I got to feel all the things he would feel as part of the study including the pencil-like retracting rod: it wasn't particularly painful, it was more of a precise feeling of touch.

'It was really reassuring how highly skilled the staff were and how good they were at calming and handling him.

'I fed him and put him down on this special bean bag that they suck all the air out of to help keep the babies' heads still. Then they put on earphones that cut out some of the sound but I think the noise actually soothed him. He was out for the count, he didn't wake up during the scanning and seemed really content afterwards.'

SSNAP (Support for the Sick Newborn & their Parents) is an Oxford-based charity: Julie Da Silva Moore, Manager SSNAP, said: 'Pain in infants is an important clinical issue and we are really pleased that infant pain is being explored. It is important for parents to be reassured that their baby is as comfortable as possible when being treated in a Newborn Care setting.'

Raliza Stoyanova, Wellcome Trust Science Portfolio Advisor, said: 'This excellent study brings together developmental neuroscience and cutting-edge neuroimaging to advance our understanding of pain. The finding that similar brain networks are activated in babies exposed to pain stimuli, as those found in adults, suggests that babies may feel pain in a similar way and that we may need to re-think clinical guidelines for infants undergoing potentially painful procedures.' 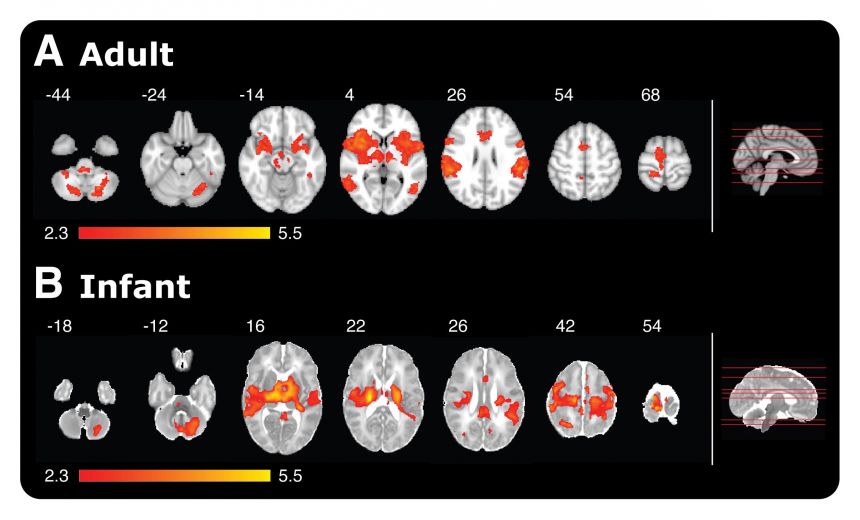 Magnetic Resonance Imaging (MRI) giving a comparison of brain activity in adults and babies when poked with a special retracting rod simulating a sensation of pain. Red-yellow coloured areas represent active brain regions. The side-on view on the far right shows the level at which each scan was taken.

A report of the research, entitled 'FMRI reveals neural activity overlap between adults and infant pain', is published in the journal eLife.