A two metre long lobster-like animal that lived 480 million years ago used spine-covered 'limbs' on its head to catch food, fossils have revealed.

The spines formed a net to filter seawater, trapping tiny particles of food – a way of gathering food used by modern marine giants such as whales. The creature is thought to be the earliest giant filter-feeder ever discovered.

'This would have been one of the largest animals alive at the time,' says Dr Allison Daley of Oxford University’s Department of Zoology, one of the study authors.

The new species, named Aegirocassis benmoulae after the Moroccan fossil hunter Mohamed Ben Moula who discovered the remains, also had paired swimming flaps along its body (which can be seen in the photograph of the fossil, below).

Side view of fossil

These flaps are likely to be the precursors of the unique 'double-branched’'legs that arthropods (animals such as lobsters, spiders and insects) have. Arthropods are the closest living relative of the now-extinct Aegirocassis.

A report of the research is published in the journal Nature. The study was carried out by scientists from Oxford University and Yale University. 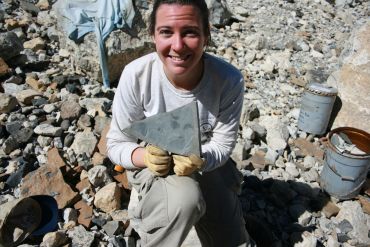 With their spine-covered head limbs and a circular ring of sharp teeth for a mouth (as originally reconstructed by one of the study authors, Professor Derek Briggs at Yale University), most anomalocaridids were apex predators, similar to present-day sharks that hunt other animals for food.

The new anomalocaridid species is more like present-day whales, which filter seawater to find their food. 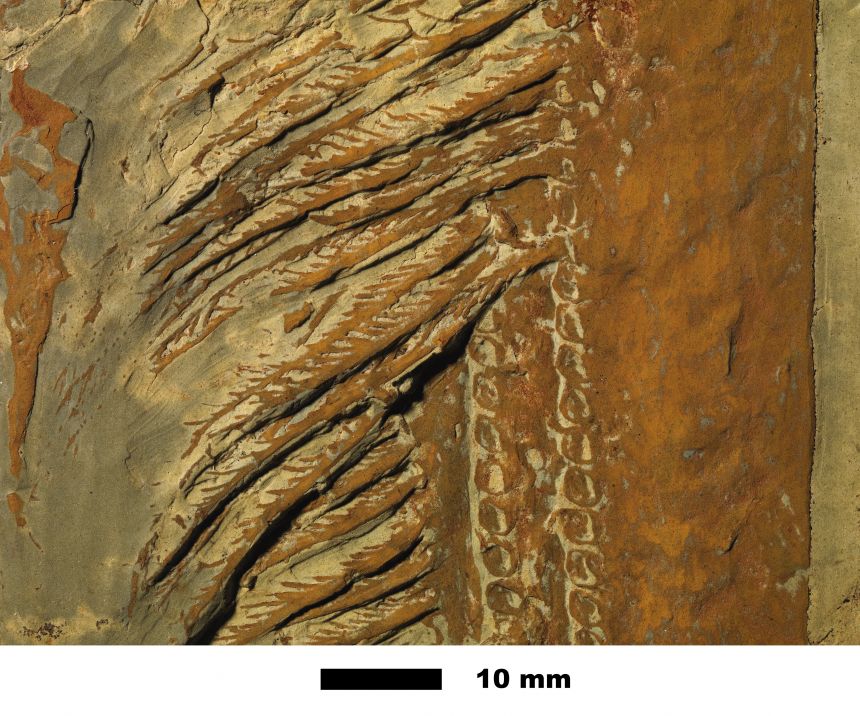 ‘These animals are filling an ecological role that hadn’t previously been filled by any other animal’ says Dr Daley. ‘While filter feeding (filtering water to find food) is probably one of the oldest ways for animals to find food, previous filter feeders were smaller, and usually attached to the sea-floor. We have found the oldest example of gigantism in a freely swimming filter feeder.’

By using tiny needle-like tools to chip away at the surrounding rock, the lead author Dr Peter Van Roy at Yale University excavated an exceptionally well-preserved three-dimensional fossil of the new species. Most previous anomalocaridid fossils were flat, like a dried leaf pressed within the pages of a book.

‘Without these 3D remains, we may never have got the insight into these animals’ anatomy that we did’, said Dr Daley.

This 3D preservation also showed that this new anomalocaridid had two pairs of swim flaps per body segment, rather than the one pair found in previous anomalocaridid fossils. The research team shows that the two pairs of swim flaps correspond the two branches of the ‘double branched’ legs found in current-day arthropods, but at a stage before they fused together into one leg.

Besides walking, arthropods use their double-branched legs for a range of other activities, from sensing the environment to feeding to mating. Scientists think that this versatility is partly what allowed arthropods to adapt to virtually every possible environment.

A report of the research, entitled ‘Anomalocaridid trunk limb homology revealed by a giant filter-feeder with paired flaps, is published in the journal Nature