A national obsession with balloon flight has left a surprising mark on English literature from the late eighteenth century, according to an Oxford University academic.

Fiona Stafford, Professor of English Language and Literature at Oxford University, found repeated references to balloons while researching for a book on the history of Romantic literature from 1785 to 1830. She said the 'balloon mania' which took place between 1783 and 1786 could change our understanding of when ‘modern celebrity’ began, as the balloon craze, and its early aeronautical heroes, predates Byron and Nelson.

'I am researching a book on the history of English Literature from 1785 to 1830 and, because it is such an important period of history, I decided to look at major events and stories which might connect writers,’ said Professor Stafford. ‘Some of the events that had a profound effect on novels and poems were unsurprising, such as the French Revolution and the campaign for the Abolition of the Slave trade. But again and again I found that very different writers, who would not normally be read alongside each other, were united by a fascination with balloons.

'Robert Burns mentioned a Lunardi bonnet, named after an Italian aeronaut, in his poem, To A Louse. Given that he was writing in Scottish dialect to a largely Scottish audience, this shows how widely balloons and aeronauts were talked about. The line, "But Miss's fine Lunardi! Fye!", really stands out and gives a literary effect that would not have been possible if balloons weren’t at the centre of national conversation.

'The poet-scientist Erasmus Darwin wrote about balloons. Gilbert White rushed out to see a French balloonist fly by in Selborne and, despite his melancholy reputation, the poet William Cowper wrote of his excitement at going to see a balloon flight in the local fields near Olney. The balloon went up and down three times before bursting into flames.'

The balloon craze began in France but came to Scotland and England soon afterwards. Italian aeronaut Vincent Lunardi made several flights across the country in front of large crowds – the Prince of Wales was among 200,000 people who watched him take off from the Artillery Ground in London in September 1784.

'It is quite amazing how famous Lunardi became straight away,' said Professor Stafford. 'We think of Byron and Nelson as the first 'celebrities' but balloon mania is happening 20 years before Trafalgar and news spreads very quickly. There are lots of accounts of flights in newspapers, street ballads, cartoons and letters. Children make small balloons out of paper bags and balloon designs appear on ladies' fans, skirts, and garters, as well as on clocks and furniture. "Balloon Coaches" allow people to imagine they are flying as they drive down the road. The Lunardi bonnets mentioned in Robert Burns's poem are everywhere.'

Professor Stafford said the craze was probably in part a reaction to the global environment at the time. 'Britain had just lost its biggest colony and the country was in a post-war sense of anti-climax with high taxes imposed to recover money spent on the war effort, so balloon mania was a distraction and a feel-good national event,' she said. 'In that respect it is similar to the Great Exhibition at the Crystal Palace, the Queen’s Diamond Jubilee or even the Olympic torch relay in 2012.'

Another reason is that balloons appeal to people with different interests. She said: 'Ballooning cuts across disciplines – it interested scientists but also captured the imagination of poets and gave them the possibility of using new kinds of metaphors which could not previously have existed. The poet, Anna Barbauld, for example, was reminded of Milton’s description of Pandaemonium when she saw a huge balloon rising at the Pantheon, but in her own poem 'Washing Day', she compared the floating soap bubbles to the Montgolfier’s "silken ball"'.

Like a lot of crazes, the excitement for balloons passed quickly. 'The mania only really lasted from 1783 to 1786,' Professor Stafford explained. 'The French revolution and subsequent war with France put a dampener on the fashion, because the balloon craze had come to England from France. Balloon technology then became used for military purposes like surveillance and reconnaissance.'

Professor Stafford's book, The Oxford History of English Literature: The Romantic Period, 1785-1830, will be published by Oxford University Press. 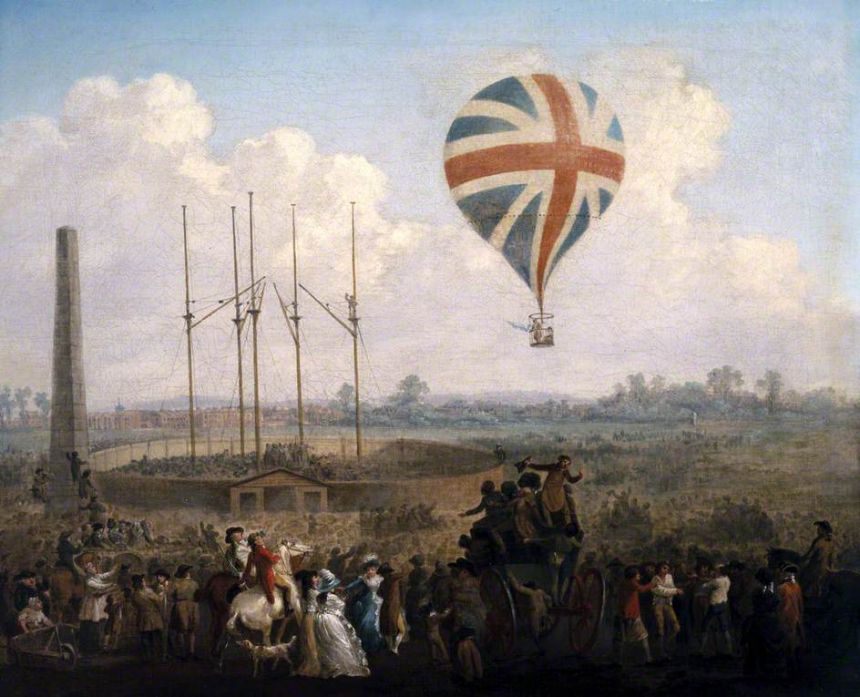